Popularity and controversy frequently go hand in hand. Ruger’s popular 10/22 Takedown is no exception. As a stock rifle with iron sights, it’s a top seller, and hard to find right now. Few people are debating the utility of a handy rimfire that can fit in a backpack. The point of contention is the optics options. There are multiple issues with mounting a scope on the receiver. Losing zero with repeated takedown is one, but that’s still open for discussion. My concern was that my Takedown wouldn’t fit in the factory bag with a scope attached to the receiver. Until now.

I’ve got a pair of 10/22 Takedowns, both currently in Magpul’s fine X-22 Backpacker stock. This makes for a very compact little plinker. One had a receiver-mounted scope, the other a barrel-mounted scope. Neither fit in the factory backpack, due to the size of the scope. The Vortex Diamondback 2-7×35 and Crossfire II 2-7×32 are both too big, despite their modest specifications. When taken down, one hangs over the receiver, the other over the butt stock. 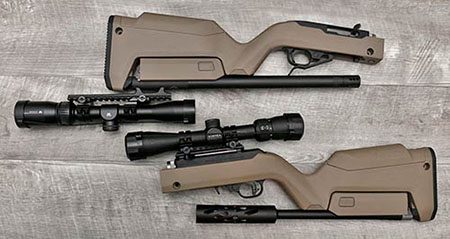 Although Magpul offers their Backpacker Optic Mount, that’s not an option for me right now. It replaces the barrel block and latch assembly, and has a Picatinny rail. This is an excellent mounting solution for a reflex sight with long eye-relief. But my preference is for a magnified optic, and a scope won’t work with it.

While browsing the internet, I saw a very compact scope on sale, and thought it would be ideal for a Ruger 22 Charger. The Sun Optics 2-6×28 scope is only 7.5 ounces, but more importantly, only 7.5 inches long. It’s got a 1″ tube, as well as both red and green illumination for its mil-dot reticle. Eye relief is a generous enough 2.95″ to 3.75″. If there is a downside, it’s that parallax is set at 100 yards, instead of the preferred 50 for rimfire. That, and finding rings narrow enough to fit it proved to be a challenge. Price paid was well below the $119.99 MSRP.

I did locate rings, but they needed a bit of touching up on the belt sander to fit. And since they were silver, a quick shot of Cerakote was required. So they’re not pretty, but they get the job done. And with questions about scopes on Chargers being a recent issue, I decided not to use it for that application. Which meant I had the perfect compact scope for one of my Takedowns. That’s how it ended up on the 10/22 Takedown, and the subject of this article.

Even with the scope, this 10/22 Takedown weighs under 4.5 pounds. Part of that is due to the light weight of the Tactical Solutions SB-X barrel. Adding their 6 ounce Axiom suppressor is a worthwhile weight penalty. Plus the stock holds a spare magazine and a full box of ammo. With that and a loaded magazine in the receiver, it’s got a total of 70 rounds on board. That gives it a packed weight of 5.4 pounds, which is still acceptable. For those that are wondering, the scope is mounted on a TandemKross Advantage charging handle/scope mount. It adds ambidextrous charging, which is ideal for suppressor use. Read my review here.

I’ve only fired it at the 25 yard indoor range so far, so I can’t comment yet on longer shots. But it worked well at that range. Although the 28mm objective isn’t super bright, the glass seems decent enough. The smaller the lens, the easier it is to make it without distortion. Also, I’ll need to see if the parallax will be an issue. But this isn’t a precision rifle by any means. Its role for me is just another plinker. And it certainly does that well.

The 10/22 Takedown fills certain niches so well. For backpacking, something to throw in the truck/trunk, or just as a compact option when storage at home is limited, these are solid little rifles. Online, I see that some people buy them just because they are easier to store and transport. Nothing wrong with that. Thanks to the different mounting options for optics, there is no need to compromise accuracy. When it warms up enough for longer outdoor sessions, I’ll give this scope a better workout. In the meantime, it’s one more option for anyone looking to keep their 10/22 Takedown compact, but with a magnified optic.

Comments? Questions? What’s your preferred optic/sighting solution for the 10/22 Takedown? Feel free to share below.