A while back, I did a Charger project in a Midwest Industries chassis. It wasn’t quite AR-themed, but had a bit of that vibe, given the handguard, grip, and mostly blacked-out components. The barrel was a KIDD 10″ steel .920 model, that I had originally planned for a different project. Because the intention was to eventually cut it down, I didn’t pay extra at time of purchase for threading. For the last six months or so, I’ve also had an A2 birdcage muzzle device sitting on my desk. With these two details bouncing around inside my head, I went to visit a local gun shop. There on the counter was an advertisement for barrelthreading.com. Suddenly, everything clicked.

Barrelthreading.com is located not far from my home in Utah. It’s actually run by my friend Mark, who I’ve probably known for 10 years or more. We met over a firearms transaction so long ago, neither can recall who was the buyer, who was the seller, and what was exchanged. Over the years, we’d chat about firearms here and there, and he’s done a bit of machine work for me. But he’s never actually threaded a barrel for me. Since I knew he already had a good reputation locally and online, I figured we’d collaborate on a project and get that porky KIDD barrel threaded, so I could throw the birdcage on it. And here’s how that went.

Before having a barrel threaded, there are a few considerations that need to be made. Thread pitch is one of them. So figure out which device you will be attaching to your barrel, and make sure you specify the correct pitch. In my case, I needed the common 1/2 x 28. Barrel length is important as well. Most of the time, you may not lose any length just to cut some threads. But it’s also possible to have a barrel cut down before being threaded. Going from 20″ or 24″ to 16″ isn’t unusual when adding a suppressor. In my case, we were going from 10″ to just over 9″. Crowning, and finishing (such as cold bluing) are also discussed. 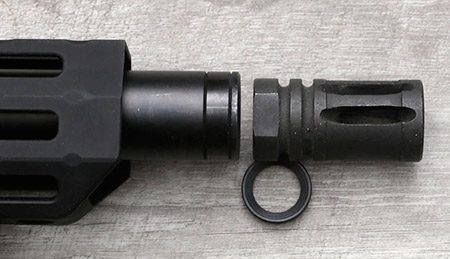 Before my KIDD barrel was cut down and threaded

For obvious legal reasons, Mark will not cut a rifle barrel shorter than 16.25″, or a shotgun barrel below 18.25″. This is to avoid running afoul of the ATF. If you need a shorter barrel, he’ll work with you to make sure you are in compliance before accepting the job. Speaking of accepting the job, he can only take in barrels, not serialized receivers. So don’t send a whole gun. But these are all things that he’ll work out with you before you send (or drop off, if you’re local) anything. Once the specifications are agreed on, you can ship your barrel, or drop it off. Note that return shipping is always free.

Cutting down my barrel

I had marked my barrel where it needed to be cut, and brought the chassis and handguard so I could show him how I wanted the final results to look. When I showed up a few days later, it was shorter, threaded, and looked like all my other factory-threaded barrels. I took it home and took some photos during the reassembly, which Mark incorporated into the video embedded below.

Now, if it was up to me, I would have documented every second of the process. Because I could sit and watch barrels spin in a lathe all day long. But I think that short video summed it up. Obviously, he can do more than just Charger barrels. Given that they are so hard to find right now, I think that buying a take-off rifle barrel and having him cut it down and thread it for a Charger is a viable alternative to waiting months for a barrel for your next compact suppressor host. As you can see in the photos below, I’ve now got my flash hider on my Charger. And when my suppressor is finally out of NFA jail, I can throw that on there instead. 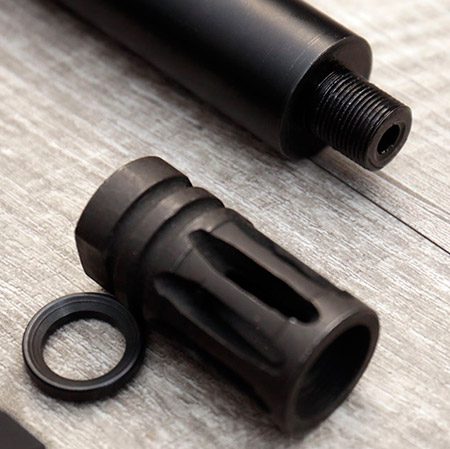 After my KIDD barrel was cut down and threaded

On his website, Mark lists some typical pricing, with the average being $95 (currently). That includes return shipping, so I’d say it’s a pretty good deal. Although he mentions a 1-2 week turnaround, that’s really something you should discuss before starting. He may be able to accommodate rush orders, and other times, he may be super busy. So set that expectation up front, rather than taking my word for it. As far as thread protectors, be prepared to source your own. Mark can make one for you, but the cost of a custom thread protector is far more expensive than a massed produced one. Anyone who knows me and has seen some of my project guns might be surprised to find out that I don’t have any custom thread protectors. Really. 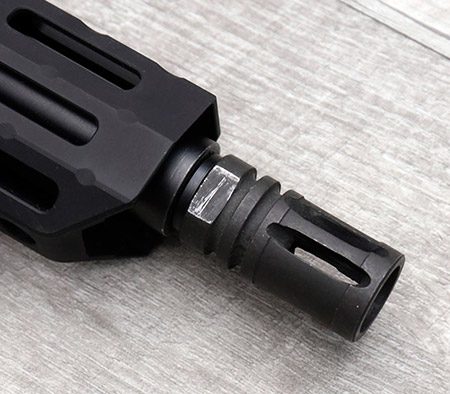 After my KIDD barrel was cut down and threaded, A2 birdcage fitted

I’m pretty stoked with how this came out. I’ve worked with some other machinists and gunsmiths before, and it’s been hit and miss. Some weren’t so good at communicating, estimating time, and giving a firm quote. I’ve ended up waiting weeks just to overpay for what in their own words didn’t sound like much work. Mark is pretty much the opposite. So there you have it. If you’ve got questions, just email Mark (@) barrelthreading.com, or even give him a call at 801 900.3352. He’s a pretty enthusiastic firearms guy, and will certainly welcome the opportunity to help you finish your next project, whatever it may be.

Charger with cut down and threaded KIDD barrel

Comments? Questions? Have any of our readers had a barrel cut and/or threaded? Or just thinking about doing that, and got some questions? Feel free to share below.