Although Boker lists the Kingpin under their “Tactical knife” selections, I prefer to think of it as a “very serious pocketknife”. The overall design, size, materials, and weight make this knife much more than just a pocketknife. But to describe it as a tactical knife may cause some potential buyers to overlook it. And that would be their loss.

Before I get into the features, a little background is necessary. The knife’s designer, Anders Högström, is a custom knife maker based in Sweden. For the first time ever, Anders has collaborated with a knife company to reach a wider audience. Boker produces the very limited Kingpin in Germany, with almost as much attention to detail as an Anders original. To me, that makes the Kingpin a “factory custom”. It’s the best of both worlds.

From the shape of the scales, to the selection of materials, each feature of the Kingpin reflects Anders’ thoughtful design. Note how the bevel shows off the layers G-10 scales. More visual appeal is added by the two rows of holes, as well as the curves and angles at each end. A removable pocket clip allows for tip-down carry. Between the scales and the blade, you’ll find a titanium spacer and liners. There is some jimping on the liner, with a large lanyard hole on the other end. Finally, we get to the 3-3/8 inch CPM154 blade with its satin finish. It comes highly polished, with a razor sharp edge. Boker ships the Kingpin in a presentation box with a drawstring bag/polishing cloth, which I found to be a nice touch when it was time to take the photos.

The Kingpin is not a small knife. At just a hair over 4.5 inches long, folded, it fills even large hands. And weighing in at 4.2 ounces, you won’t forget that it’s in your pocket. But even with all that bulk and size, it balances well in large and smaller hands. That big cutout in the blade makes opening with one hand very easy. It locks open solidly, with no play at all. And stays open until you close it via the titanium liner lock. I really like the recess at the heel of the blade too. While it can be used to apply more force, it also provides for finer control. Even a novice user can get a very fine edge from the Kingpin’s CPM154 steel blade as well. And it will stay sharp and resist corrosion much longer than your typical blade. 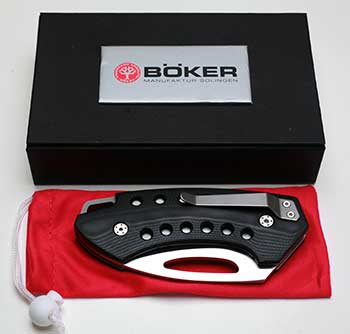 Just like every other knife I have reviewed, I carried the Kingpin for at least a couple of weeks, to get a feel for every day use. During that time, I used it for every task I could think of. That meant food prep in the kitchen, and opening boxes and cutting things in the office. And outdoors, that meant cutting irrigation tubing as well as twine or rope, and snipping veggies out of my garden. Finally, I used it to make some fuzz sticks, and whittle sticks for roasting marshmallows. It should come as no surprise that the Kingpin handled all these tasks effortlessly.

There is no question that the Kingpin is a great option for the discerning enthusiast. This is a knife that handles well, looks great, and has a blade made for hard work. I did find that it’s a bit much for every day carry during the summer, when I wear shorts. That’s mostly due to the weight. Yes, you’ll notice a quarter pound plus of knife in your pocket. But as the weather cools, and I go back to jeans, I can see the Kingpin being my EDC choice. While the MSRP of $339 might seem steep, it’s a bargain for an Anders Högström design. On top of that, I see no reason why the Kingpin won’t last for generations. Buy this one with your kids or grandkids in mind. Visit Boker for most of their knives and accessories.

As always, I’d like to thank Boker for providing the opportunity to try out another one of their outstanding products. The Kingpin they provided for this review arrived razor sharp, and even after all of our testing, only took a quick touch-up to restore that fierce edge.