Whether commuting, riding for fitness, or just out for fun, cycling is an excellent form of transportation. But as the days get shorter, there’s less daylight to enjoy. And it turns out that early mornings and late afternoons are bad times for cyclists. So we need every advantage we can get when it comes to visibility. That’s where the Downtown BIke Lights from Brooklyn Bicycle Co. really shine.

Bad puns aside, these are some handy lights for the casual cyclist. With their simple mount, durable alloy shell, bright LED bulbs, and wallet-friendly price, you can’t go wrong. To be clear, they are not for lighting your way. The front white LED is bright, but not bright enough to illuminate road debris at speed. Instead, they provide a little extra protection in the form of visibility when you’re riding at the edge of light and darkness. 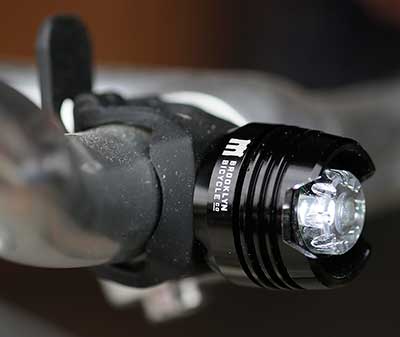 After removing the plastic battery protector installed during shipping, installation is easy. Pull the stretchy rubber band around your handlebar or seatpost, and let the hook catch in one of the holes. Installation complete. You may need to spend a moment making sure the front one is level, and the rear is not pointed off to one side, but that’s about it.

Instead of a switch that could get bumped by accident, the lens is also the switch. Press once for fast flashing, again for slower flashing, a third time for continuous light, and once more to turn off. In my opinion, this is really clever. Besides making it more difficult to accidentally drain the batteries, it’s less moving parts. 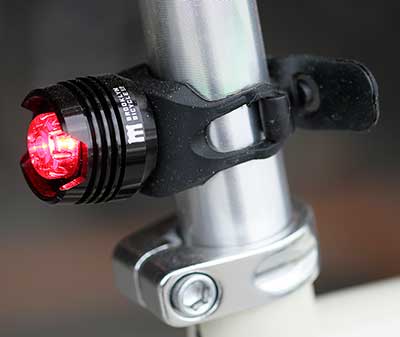 Most of our riding is done on a bike path, but I do ride on the streets, sometimes later than I should. And that’s when I use this light set. While no output is listed, the front is bright enough that I can see it reflected off stop signs from more than 100 feet away. Despite the super quiet stealthiness of my Brooklyn Bicycle Co. Bedford 3, a group of kids watched me approach from a distance. I thought that was odd, until I realized that the white LED probably stood out long before they could see I was on a bike. As far as run time, I’ve used them for many evenings over the last several months, and have not had to change the batteries yet.

For $19.99, this light set is perfect for casual cyclists. Even better, the set shows as being on sale for $15.99 as I was preparing to publish this review. Although you could buy them separately for $11.99 each, it doesn’t make sense to. Just get the pair. Check them out at BrooklynBicycleCo.com.

A special thanks to Brooklyn Bicycle Co. for providing this set of lights for review. They are a much-appreciated accessory.