Got a 10/22? Then you’ll want to check out the 22LR Rotary Mag Charger from Caldwell. If you love shooting rimfire ammo, but hate loading magazines, it’s your new best friend. Before I get into the review, let me explain why I wanted one. For most range trips, we go through a 550 round carton of bulk ammo. So I bought enough 10, 15, 25, and 110 round (drum) magazines to hold that exact amount. While this is perfectly sound logic, it’s also a pain to load all of them. I was gifted a different mag loader, but all it really offered was frustration. Thankfully, Caldwell provides a solution to that.

Find the best price on Amazon!

Most .22 magazine loaders follow the same basic design. A polycarbonate shell with a groove for the rounds to drop in to.That groove is a bit wider than a .22 round, but narrower than the rim. Which leaves the rounds hanging, primer up. Then a lever of some sort pushes them into the magazine. Caldwell took that concept, and improved on it in a few ways. In doing so, they created a pretty handy charger that works well, saving you time loading. Which can mean more time shooting.

As mentioned, the 22LR Rotary Mag Charger is made of tough polycarbonate. Don’t fear this fancy plastic, as it has the ideal qualities for this application. First, it’s light, yet sufficiently strong. Second, it’s smooth enough to keep the friction low, for reliable loading. Finally, it keeps the manufacturing costs down. This loader may not last forever, but with a modest $30.99 MSRP, you’ll certainly get your money’s worth.

For simplicity, there are minimal moving parts. The hopper lid is hinged. There’s a mag lock/release lever. And of course the handle that you twist to load ammo. The base has a molded honeycomb design for strength and stability without much added weight. Not a lot to go wrong here.

How to use it

Pop open the hopper, and dump in up to 100 rounds of your favorite ammo. I recommend bulk ammo. If you’ve got the budget for expensive target ammo, it should load just fine too. Although I suspect that the paper punching crowd prefers to load their mags by hand anyway. Either way, once your ammo is in there, shake it up a bit. This will cause the rounds to drop into that groove.

Next step is to push in a mag. Make sure it’s oriented correctly. Then twist that handle. Each full rotation loads two rounds. Five twists, and your ten round mag is done. Press the release to remove your magazine. Repeat as necessary. If a round jams, a little shake usually causes it to fall out the hole between the crank and the mag. It’s that simple.

For this test, I used Federal and American Eagle bulk ammo. My magazines included 10, 15, and 25 round factory Ruger magazines, as well as Butler Creek 25 round ones, with the metal feed lips. Ammo shouldn’t make any difference, while it’s obvious that some mags may perform better than others. My results surprised me.

First up was a brand new Ruger 10 round. Overcoming the factory fresh spring didn’t go well. So I set it aside, and tried a broken-in magazine. That took ten rounds in just a few seconds, with little effort. Same with the 15 and 25 round ones. While I’ll admit I had lower expectations for the aftermarket magazine, it worked just as well. Overall, I loaded up several hundred rounds, with maybe one in 50 hanging up and ejecting out the port for the jams. Not bad. 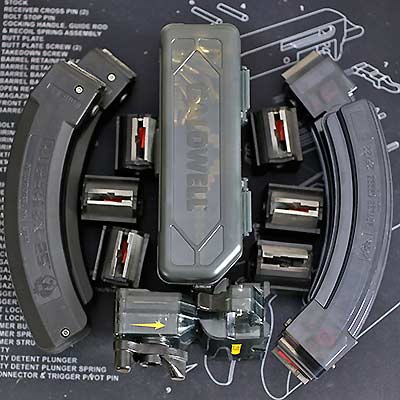 Caldwell 22LR Rotary Mag Charger with some of my test magazines

Although I didn’t have any Thompson magazines on hand to test, I noted they have a certain requirement. The first round must be manually loaded. Taking that logic a step further, I loaded a single round into my new Ruger magazines. The ones that didn’t load well at all. From there, I had much more success. A bit more testing confirmed that this is a viable workaround. Note that it won’t work with the GSG drum, due to the way the drum is designed.

Nothing about rimfire is ever perfect, and this loader is no exception. It had a few jams, which was expected. Over time, I think that I’ll get used to shaking it just right to get the rounds to drop quickly. And maybe as I find my cadence with the lever, I’ll have less jams. Do I need to do a long-term test to see if it holds up well? Oh yeah. But did it save me time? Absolutely! Does that make it worth the modest cost? Definitely.

For the very casual shooter, this may not make a good deal of sense. And for someone shooting the really good stuff, they may not want it banging around in a hopper, then have a lever push it into the magazine. But if you’re like me, and burn through bulk ammo, you’ll want this. As the fastest 10/22 (and T/CR22) magazine loader currently available, it belongs in your range bag. Find it and a whole bunch of other shooting gear at Caldwellshooting.com.

Caldwell was kind enough to provide their 22LR Mag Charger for our testing and evaluation. As with all our reviews, I’ve made every effort to provide an honest opinion, including overall quality, function, and durability. If it’s not something I would buy myself, or recommend to friends, I’m not sharing it on this site. It’s that simple.

Comments? Questions? Have any of our readers tried out the CST receivers? Feel free to share below.