When I first saw the Tack Driver X Bag from Caldwell, I knew I was going to have to try it out. As a long-time user of their gear, I’ve always been happy with Caldwell’s support products. This 8x8x8 bean bag-style rest is designed for competition use, hunting, or casual fun. While it looks very different from the usual green bag sets familiar to Caldwell fans, it’s actually a clever design. 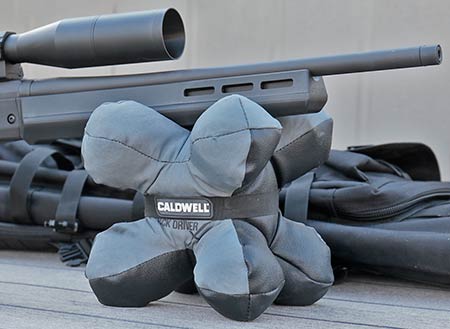 What’s with the crazy shape?

Rather than a simple V-shape, the Tack Driver X Bag has 8 “legs”. At first glance, this might seem odd. But when it’s time to rest it on a fence, tree branch, barrel, or other odd shape, it makes perfect sense. As Caldwell notes in their product description, PRS matches involve barricades and rooftops as well as window and port openings. For all the places where your bipod won’t work, this is the solution.

I couldn’t find the specs on the material, but it seems to be a durable nylon. On the bottom, it’s rubberized for traction. Set this bag down, and it stays in place. Inside, there are plastic pellets. They give it that bit of movement needed, but also don’t absorb water. It’s hard to tell from the photos, but it’s not exactly symmetrical. Turning it on its side provides wider or narrower rest options. That can be changed up even more with the strap around the middle. Loosen or tighten the strap to make it taller or wider.

At 2.5 pounds, it’s not something I would want to carry in the field all day. But it’s not a huge burden for competition, or an afternoon at the range. The same strap that allows you to adjust the height and width makes it easy to transport. Since we mostly used it shooting from a table or bench, it was no big deal.

It would be great if I could share a story about running a PRS match with my centerfire rifle and the Tack Driver X Bag. But nearly all of what we did with it involved shooting rimfire rifles off a table. And for that, it worked great. Being able to make small height adjustments was a bonus, since we usually have adult and children shooters.

On one outing, I brought my .308, and we used the Tack Driver X Bag to shoot from a truck bed. It performed well resting on the side of the bed, the tailgate, and hood. Maybe not the most likely use case, but I found that it’s clearly a flexible rest. More importantly, it’s pretty stable under a heavy rifle, and didn’t slide around, even under recoil. I also tried it as a rest under a variety of uneven surfaces (a fence, a railing, and an actual window opening) but didn’t fire my rifle, as my immediate neighbors would frown on that.

This is a product with a single moving part – the strap. So describing it is a bit of a challenge. And being a rifle rest, it’s really just a fancy bean bag. Despite the simple design and construction, I can see where it would be a versatile rest for a variety of conditions. It retails between about $40 and $50, which seems pretty fair, given that it should last for many years. After using it all summer, it still looks new, if maybe a little dirty.

If you’re one of those shooters with an aversion to bipods, or just likes to shoot from a bag, this might be what you’re looking for. It’s already replaced my classic green rest as I find it more versatile. Check it out at Caldwellshooting.com.

A special thanks to Caldwell for sending their Tack Driver X Bag for this review. We certainly put it to good use over the summer, and look forward to another season with it.

← SOG Scout 24 Backpack
My First Suppressor – a Tale of Money and Waiting. Lots of Waiting. →