At first, I wasn’t sure how to review the PX100 flashlight from Coast. After all, a UV LED flashlight isn’t the first thing I reach for, before heading outdoors. Then I did a little research, and realized it can be an invaluable tool for outdoor enthusiasts.

Yeah, we all know that a UV (also called a “black light”) light is great for certain tasks. Like uncovering those fake $100 bills. Except who carries cash these days? Sure, they’re also great for detecting leaks in the engine compartment of your vehicle. But home mechanics are becoming scarce too. Of course, it’s still a great tool for mechanics, no question there. Also, they can detect bodily fluids. Eww, no thanks. You may never stay in another hotel room. So what is it good for? Detecting scorpions! 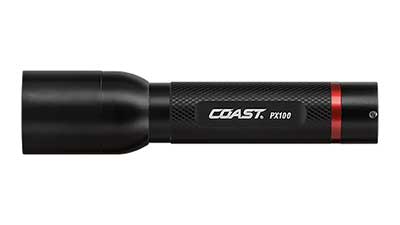 In the state of Utah, we have a mere nine types of scorpions. But neighboring Arizona has 55 varieties! Between the two states, there is only one really worrisome scorpion. Our bark scorpion has a sting that can affect humans. And like many dangerous critters, they hide during the day, and come out at night to feed. Oddly enough, there is a component to their shell that causes them to fluoresce under UV light. Yes, scorpions are naturally all-night ravers. So you can use the PX100 to either locate them, or help you avoid them. Either way, it’s plenty bright to see by.

Sadly, our weather has not been conducive to scorpion hunting. We went from 100 degree days filled with the smoke of wildfires (keeping us out of the mountains), to rain. And lots of it. With flash flood warnings. So I haven’t been able to go try out the PX100 on scorpions. But I do see some photographic potential here. If that’s successful, you can be sure I’ll share that on my Instragram.

Since my car has no leaks (I checked, then found out you need a dye too), that didn’t leave much else to try it out on. But we do have a cat and three rescued dogs, all of whom have misbehaved at one point or another. After turning out all the lights in the house, I decided to do an inspection. All the pets have access to the main floor, and only the cat goes upstairs. Let’s just say that I’ll be taking the steam cleaner to the carpets soon, and giving the stink eye to the cat. Because the PX100 brought out certain indiscretions in great detail. Actually, I’m not even sure it was our cat. It’s entirely possible it was from the previous owner. Well, their pet. Or child.

If you think you may have a misbehaving pet, the PX100 is the perfect diagnostic tool. Of course, you may find out things you don’t want to know. On the bright side, the MSRP is only $25, so it won’t cost much to find out. That $25 gets you a durable aluminum flashlight that runs on a single included AA battery. It’s 4.2 inches long, and only weighs 2 ounces. It’s got light knurling on the body, and a recessed switch in the tail cap. Oh, it’s also weatherproof, with an IPX4 rating. So take it outdoors. Output is 400NM, which is a wavelength, not a measure of quantity like lumens. But as mentioned, it’s bright enough to light your path, although the beam is somewhat narrow.

I would like to thank Coast Portland for providing their PX100 for this review. My favorite reviews are fun and informative, and this one was definitely both. In the case of the PX100, I got to learn something new about scorpions. Actually, I learned quite a bit about our local scorpions. Now I just need to find some. If you want to find the PX100, head over to the Coast website at coastportland.com.