To celebrate the 77th birthday of Chuck Norris, we’re sharing our reviews of the TX395 knife and TX7R flashlight from Coast Portland. That’s right, no cake, no candles. Just a knife and flashlight. Because they are two of the toughest, manliest pieces of gear available from Coast. They’re built for hard work, under the kind of conditions seen by military and law enforcement officers. Indeed, the kind of roles played by Chuck Norris himself.

First up is the Coast TX395 Double Lock Folder. Surely, the TX is for Texas. As in, Walker, Texas Ranger. Or not. Anyway, this knife is a 7.7 ounce handful of nylon-wrapped steel. That’s right, it’s nearly a half pound. This thing is A Force of One. Closed, it’s 5 inches long. That thick slab of steel used for the 3.9 inch blade brings it to 8.9 inches when open. Besides holding an edge well, the 9CR18MOV blade is easy to sharpen. Serrations on the bottom inch or so of the blade will require extra time though. Speedy opening is accomplished with a thumbhole in the blade, which also saves a bit of weight. 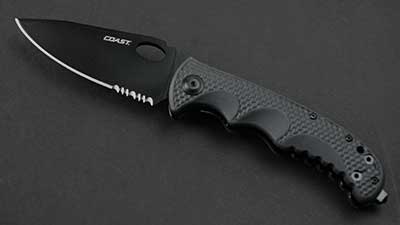 In addition to the features above, the TX395 has a few more tricks up its sleeve. The three position pocket clip allows you to carry it tip up or down, with the clip on either side when tip-up. Locking is via the liner lock, and there is the secondary lock on the back, where the blade and handle meet. Extra security is always appreciated. On the base is a handy glass breaker. Naturally the grip and blade are both finished in a matte black. Because Good Guys Wear Black.

Overall, I really like this knife. Regardless of your occupation, it’s going to make a bold statement when you use it. For cutting and prying, it’s big, and lets you get some leverage. Honestly, if you had to use it to defend yourself, it would be intimidating too. Forget the argument about which steel is the best. It’s sharp, and will cut. And I don’t care who you are, I wouldn’t want to be on the wrong end of it. Despite all the features, plus the lifetime warranty, it can generally be found for around $60. While not exactly cheap, it’s not the end of the world, should it become Missing in Action. (I found it for under $40 here).

Next, we have the TX7R Flashlight. This is the Top Dog when it comes to easy to carry, duty-style flashlights from Coast. Unlike some of their other models, this packs all my favorite features into a single light. With an overall length of 6.125 inches, and a weight of 7.5 ounces, it’s compact and light. Yet it packs 325 lumens and a Long Range Optic System with Slide Focus. That gives the beam a max distance of 1200 feet. Push or pull on the rubber ring around the lens to go from wide to that long range spot. Incapacitate bad guys with the strobe option, activated by the tail cap switch. 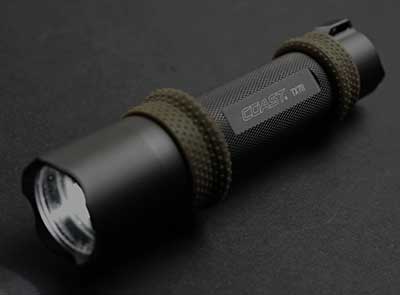 Inside, you’ll find the Flex Dual Charge Power system. While some might prefer the 18650 battery system, I think Coast has done one better. Each TX7R ships with two lithium-ion battery packs. These are charged via micro USB – no need for an external charger. You can charge them in the flashlight, or out. And each offers 7.5 hours of run time. Should you need it, there is also an insert for 4 AAA batteries, in a pinch.

When you need to see things far away at night, this light packs a big punch in a small package. More than that, it manages to feel lighter than it is. For a half pound light, I had no trouble carrying it on long walks. Finally, don’t let the $175 MSRP scare you off. I found it for a lot less here.

Together, the TX395 and TX7R make great Sidekicks for your next outdoor adventure, or every day use. And they both embody the things we admire about Chuck Norris: they’re tough, and won’t let you down. I don’t know if they’re used by The Delta Force, but I would go into a Silent Rage if someone stole either one from me. For that, they would feel my Forced Vengeance.

I’d like to thank Coast Portland for providing their products for this review. As well, I’d like to wish Chuck Norris a happy birthday, and thank him for his contributions to martial arts, movies, television, and internet memes. Because without him, the internet would be dominated by cats.

So what do you think? Are they as tough as Chuck? Leave your comments below.