Ruger 10/22 Takedown owners now have even more options with the new Crazy Ivan Takedown chassis. Available as a chassis only, or with a choice of two different M-LOK compatible handguards, it’s got a lot going for it. In addition to the handguard options, there are plenty of stocks and braces available. Plus there are nine color choices. Here’s some details, along with a couple of builds I did with my sample chassis. I no longer have a Charger Takedown, but the chassis works with them too.

I have to spell out the full name for a reason. Unlike some other chassis systems, the Crazy Ivan works with genuine Ruger and most aftermarket receivers. I’ve got one Ruger, and one Brownells, both fit fine. There shouldn’t be any issues with Tactical Innovations or Tactical Solutions receivers either. With limited availability of genuine Ruger products, it’s nice to know you can still go aftermarket without fitment issues.

Taking that a step further, the optional 1.45 ounce skeletonized pistol grip has options too. First, it’s available with two different grip angles. Either standard 25 degree, or a 15 degree option (shown) for shooters who tuck in their elbows. Included with the chassis is a matching insert to go between the grip and trigger. Buyers can request (at no extra charge) an insert that matches the contour of the Volquartsen trigger group housing. That’s a nice touch, where some manufacturers just state that they can’t guarantee compatibility. Of course, just about any AR-compatible grip will work too.

Each chassis (and handguard) is machined from billet 6061-T6 hardened aluminum. Then they either get anodized or Cerakoted. Colors include anodized black, Satin Aluminum, Gun Metal Grey, Burnt Bronze, Desert Sand, OD Green, Habanero Red, NRA Blue, and Flat Dark Earth (AKA “Tactical Peantbutter”, as pictured). All tolerances are held pretty tight too. I’ve never had an issue fitting any receiver, and there’s no slop. For those not liking the lightening cuts on the 7.9 ounce Lite version, there is an 8.3 ounce Slick-Side version. All necessary mounting hardware and instructions are included.

This takedown chassis obviously works with the matching handguard. But by design, it’s compatible with other factory or aftermarket handguards. That’s one of the nicer features of the takedown’s modular design. Although I’m not sure why anyone would want to use a different chassis. At 7.9 ounces, there probably isn’t a lighter one out there. Add the 7″, 4.1 ounce handguard, or the 10″, 6.1 ounce version, and you have a very lightweight base for your build.

Compatibility is the same for the handguard options. They will work with the factory chassis, or aftermarket ones. While I really like the way the Magpul Backpacker combines both halves, I can see the advantage of adding some M-LOK slots. Plus they have anti-rotation QD sling swivel holes, which are super handy. If there is a downside, it’s that color matching might be an issue. Another reason why some of us stick with black components.

Maximum stock and brace compatibility too

My first choice for a stock is the Crazy Ivan Carbon Fiber Stock Kit (top photo), which I covered here. It’s very versatile, offering plenty of adjustment, at a very low weight penalty. For my lightweight SB-X barreled takedown, this is a great match. With a compact scope, the whole rifle weighs 4.55 pounds. Add a suppressor, and it’s still under 5 pounds, which is less than a factory fixed-barrel 10/22.

By accepting a standard AR receiver extension (buffer tube), the chassis can also utilize nearly unlimited stock and brace options. The only thing I haven’t personally tried is a Picatinny adapter, simply because I can’t find one. That would be ideal for a folding brace on a Charger. Speaking of Chargers, the Crazy Ivan Carbon Fiber Tailhook Adapter Kit is another lightweight brace option.

In addition to the grip insert for Ruger or Volquartsen trigger groups, there are other small details which speak to the continuous refinement of the chassis. An included set screw in the back of the chassis ensures a solid fit without the need for a rear tang. This gets set before the stock or buffer tube is installed, and needs no further attention. It holds the receiver in place at the rear, yet the receiver is still removed and installed without any extra effort. It’s a simple feature that can help increase consistency with groups. 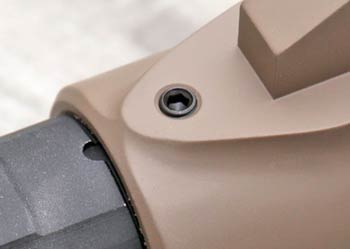 Another set screw goes in the underside of the chassis. This locks the buffer tube or stock adapter in place. In the case of a buffer tube, no lock ring is required, for simplicity of assembly and further weight savings. And then there’s even a little nylon retainer for the chassis takedown screw. Its only purpose is to keep the screw from falling out of the chassis when taking it apart. It might not seem like a big deal, but since the chassis uses a screw that is different from the Ruger OEM one, it’s nice to not lose it. 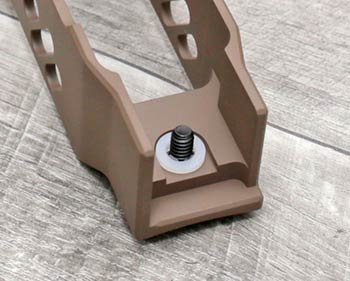 Receiver and barrel installation is the same as any other takedown. There is a screw for the chassis, and one included with the handguard as well. Stock or brace installation should be done in a specific order though. First, the set screw for the receiver needs to be installed in the back. It should hold the receiver in, but still allow removal. I recommend getting it as snug as possible without going too tight. 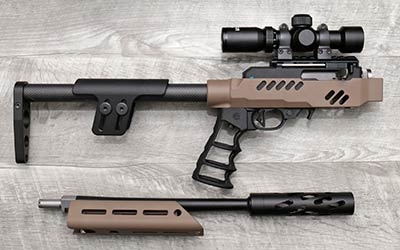 Exercising those options even more

The day after the chassis arrived, I assembled it with my two takedowns, to see if I had a preference. The heavy Tac-Hammer barrel with a red dot and adjustable stock is nice. At 6+ pounds, it’s not exactly light though. Add a suppressor, and it’s 6 ounces heavier, along with 6″ longer. The SB-X barrel build is more than a pound lighter, even with the scope. And as I type this out, I see just how backwards this actually is.

If my wallet can stand the extra expense, there is a logical solution. Adding the Magpul optic mount to the SB-X build would allow me to mount the reflex sight on the barrel. That would get me back down to around 4.5 pounds with the suppressor. Installing the scope on the Tac-Hammer would add about a half pound, but would make better use of the heavier barrel. All I need is another Crazy Ivan handguard. Maybe the longer version, with a bipod up front. That would give me the ability to go from light and fast to slightly heavier, but with more precision. And with both optics being barrel-mounted, I wouldn’t have to worry about losing zero when switching between them.

No range report. Yet. And a conclusion

Both barreled actions have been fired plenty already. So there shouldn’t be any surprises. And I’ve already used the Crazy Ivan carbon fiber stock with great results. The only really new thing for me is the 15 degree grip, which I’m anxious to try out. I’ll probably end up making some changes, based on my comments above, and then come back with a full range report. In the meantime, this was meant to be an overview of the chassis and handguard, along with the versatility of options offered. Hopefully, I didn’t miss anything.

I’d like to thank Karl from Crazy Ivan for providing his products for my testing and evaluation. And I appreciate his “Performance Boosting Innovation”. If you’re building a lightweight competition rifle, or just want a custom build with a lot of features and options, definitely check out crazyivanllc.com.