When I first handled the Amicus™ from CRKT®, I was surprised by the heft. With a weight of 6.7 ounces, it’s no lightweight. But once I opened the blade, I found it to be nicely balanced. For a knife that’s all steel, that’s no easy task. Of course, with a name like Amicus, which means friend or comrade, I was expecting it to become an every day carry companion.

Columbia River Knife and Tool® has been around since 1994. While that might make them a relative newcomer to the industry, they’ve certainly come a long way in a short time. Their path to success is a result of two things. First, they make good use of all the technology available to knife builders today. Second, they have partnered with some outstanding designers and knife makers. Together, CRKT offers attractive products that stand up to day-to-day use and abuse. They don’t sell anything they wouldn’t be proud to carry themselves. 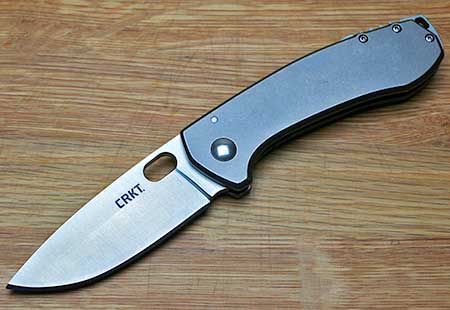 Which brings us back to their Amicus knife. Designed for outdoor use, this knife is clearly built to last. Let’s start with the 3.4″ blade. It’s a robust 0.154″ (3.91mm) thick. That’s where some of the extra heft comes from, but also why it balances so well with the stonewashed stainless steel handles. And those handles have nice smooth edges, so they don’t tear up your pocket. For simplicity, a frame lock keeps the blade open, while reducing the weight a bit. A small lanyard hole, thumb slot in the blade, and reversible clip round out the features.

Made from 8Cr13Mov steel, the blade will take an edge, and is easy to sharpen. It’s a good balance between holding an edge, and price. Yes, there are better steels out there (not at $59.99 though), but they cost more, and usually require more skill to sharpen. Keep this blade clean, give it a little light oil once in a while, and you can hand it down to your grandson (or daughter).

Since Jesper tests his designs in the fjords and forests of Denmark, I feel like the Amicus should hold up to my less demanding use. That consists of cutting chores around the house and yard. For outdoor use, rope, twine, and small branches didn’t stand a chance. I also cut cloth and sliced some chicken and vegetables, to give it a proper workout. Honestly, I felt like I was driving a sports car in Los Angeles traffic. This knife is a lot tougher than my testing. It won’t let you down.

After a week of carrying the Amicus, I hardly noticed the weight. One thing I did need to do was reverse the clip, so I could carry tip down, which seems more natural to me. Overall, the Amicus has been a great knife in every way. Its price is very attractive too. This would be perfect for someone stepping up from “disposable” (sub-$30) knives that have cheaper blades. Yet it’s not as pricey as some of the more exotic steels, and still gets the job done. I’d say CRKT and Jesper nailed it on this one. crkt.com

I’d like to thank CRKT for providing their Amicus for this review. It’s a quality knife that performs better than expected, given the very reasonable price.