It shouldn’t surprise any of my regular readers that I’m reviewing the CST Centrix-22 receiver for 10/22-compatible rifles. As I’ve learned the hard way, you need to start with a quality receiver if you want good results. And my last non-Ruger receiver project didn’t go well. So I reached out to Mike Irwin, of Custom Shooting Technologies, Inc. for help with my “do-over”. This time, I’d use a proven design from the start. And I combined his receiver with some other top brands. To say it worked out well is an understatement.

If I mentioned it was CNC machined from aerospace-grade 6061-T6 aluminum, no one would be surprised. That it’s available with a clear or black hard anodize finish wouldn’t raise many eyebrows either. Even the cleaning hole in the back and integral rail are probably pretty commonplace at this point. But it’s definitely not like every other aftermarket receiver. And I’m not just saying that because the machine work includes some extra cuts that make it flow gracefully into the stock. No, it’s not just another pretty chunk of machined aluminum. 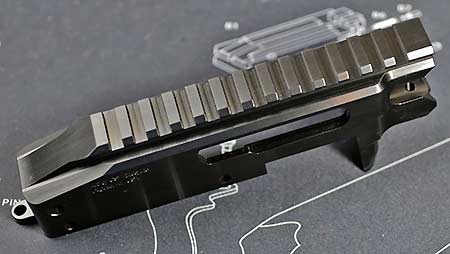 At the rear of the receiver is a removable rear tab. Without the tab, you can drop it into any stock. With the tab in place, you have a rear anchor point for bedding your action. A rear pillar kit is required, and the CST website has detailed instructions for installation. But for the very reasonable price of $169.95, this receiver comes ready to install in a factory birch stock, aftermarket laminate, or anything in between. In my case, I mixed things up by installing it in a factory laminate stock (not currently bedded, but more on that later). 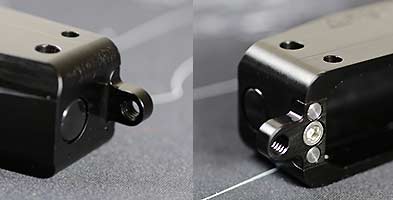 CST claims their receiver is fully compatible with factory and aftermarket stocks, barrels, triggers, bolts, and other components. Now, I couldn’t possibly test this out with every product out there. But I did have a JWH Custom bolt and Timney trigger group that didn’t work with my last receiver. They went right together with the CST. And my aftermarket barrel (from KIDD) slipped in with just enough resistance that I didn’t need to heat the receiver, freeze the barrel, or anything else. A light tap on the back to set it was all it took. A little custom shop provided my stainless v-block and screws, and I was set. Dropped it all into a Ruger factory laminated stock, and went looking for a scope.

There are a couple of noteworthy reasons I like their integrated rail. First, it includes a reinforced tang built right in. Extra rigidity without added weight is nice. And it looks great too. From a functional standpoint, the second reason is even better. No need to buy a rail, either factory or aftermarket. No need to deal with torquing screws, or worrying that they might loosen. And certainly no need to ever wonder about alignment. The integral rail allows you to lock your scope down solid, with confidence in its alignment. 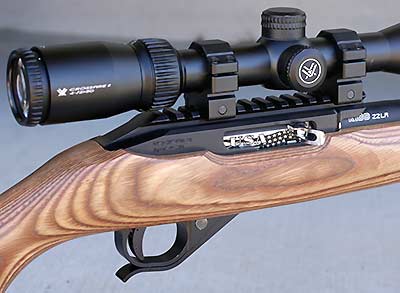 If you can picture a drunk in a sporting goods store, sweeping armloads of scopes into a shopping cart, you can get an idea of me at a Vortex sale. Maybe that’s a bit extreme, but I’m partial to Vortex, and grab them when I see a good price. So I usually have a few on hand. I chose the 4-12×50 to match my wife’s rifle, despite the fact that our “matching rifles” don’t match. But now is not the time to get hung up on semantics.

It’s kind of funny, but the receiver’s ability to do its job isn’t easily quantified. No moving parts, it just sort of “sits there”. Except, as mentioned, this isn’t my first aftermarket receiver. “Stringent tolerances” and “hand deburred and polished” make a difference. The bolt travel is smooth, and the only resistance is from the spring – no drag. So the receiver’s job is really the base. It holds all the other parts together. 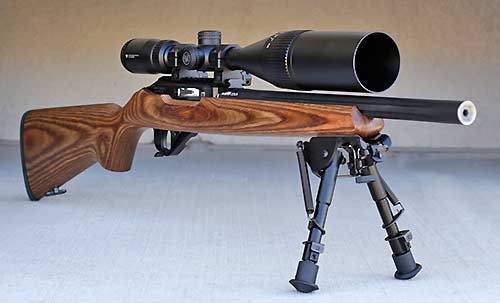 My complete build with a CST Centrix-22 receiver

Now, this isn’t the first time all these bits and pieces have gotten together. But it’s the first time they’ve been successfully assembled into a working firearm. Some of them came from a failed (sort of) project. So they’re like a group of Special Forces operators that haven’t ever met. They all have proven backgrounds, but this is their first team effort. As expected, they ended up performing well together.

At the indoor range, I attempted to sight in the scope with the barrel already broken in. First five shot group at 25 yards, and something’s not right. Bring the target closer. One hole, 0.259″ across. Shoot another group, almost the same. This brought a smile to my face. All I could do was adjust the scope a bit, and wait for the weather to cooperate. Because this rifle won’t break a sweat at 25 yards.

Outdoors, I had the same narrow window as my other project rifle. Along with the Federal bulk, I used some Aguila .22 Target Competition 40 grain ammo. The Aguila did a bit better than the Federal, which was to be expected. Out of 100 rounds at 50 yards, I had some groups come in around a 1/2 inch, and most not too much bigger. More important, they were far more consistent than my usual groups ruined by flyers.

Was it the receiver, the trigger, the bolt, or the barrel? No, it’s all of them together. And the CST Centrix-22 laid a solid foundation for the rest of the quality components. This rifle is a joy to shoot. Because it makes even a mediocre enthusiast like me look good, when I do my part. Do I need to bed the action? Probably not. It’s already beyond my skill to shoot this rifle any better. But it’s certainly nice to have that option. This may be my first rifle where I actually start shooting for groups, instead of just hitting steel targets.

If you’d like more info on CST products, or to get your own Centrix-22 receiver, head over to cstmtech.com.

Other components of this rifle:

Comments? Questions? Have any of our readers tried out the CST receivers? Feel free to share below.