Building a custom Ruger 10/22 has never been easier (or more fun). Now, Deadshot Arms lets you take it another step further. They offer match grade bolts, with all the usual touches, plus either KG Gun Kote, or a Cerakote finish. This is both a functional and cosmetic upgrade. So not only does your 10/22 run better, it looks better too. They’re only available on eBay right now, but that also means you get all the usual buyer protections, plus a lower price, since they have neither a physical store nor a website to maintain. They pass that lower overhead on to their customers in the form of lower costs.

They were kind enough to provide a bolt for review. My plan was simple enough: run the bolt for several hundred rounds with no cleaning, and see what happens. Pretty sure that the kids I take shooting thought this was solid plan. I literally handed them a 10/22 and asked them to shoot up a brick of ammo for me. Of course, I took before and after photos, and notes on how it functioned.

The bolt itself is your typical match bolt. Nice CNC machine work from a billet, rather than the standard Ruger casting. It’s cross-drilled and pinned over the firing pin, to prevent the firing pin from bouncing. Both the firing pin and extractor have also been upgraded. At the front, it’s cut for the correct headspace. Out back, it’s been radiused and polished. Basically, it’s the same as every other match bolt. Except for the coating. 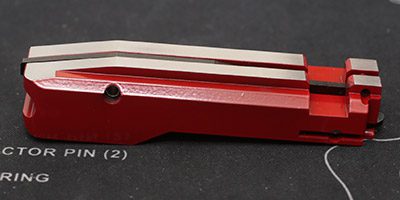 Deadshot uses KG Gun Kote on some of their bolts. It’s a spray on, heat-cured treatment. And it’s not just for looks. The main benefit in this application is lubricity. It should run smoother than metal on metal, which reduces friction. That should equate to better cycling and easier cleaning too. Other properties include heat dissipation and corrosion resistance, which are less critical in a rimfire firearm. Mine came in a nice shade of red. 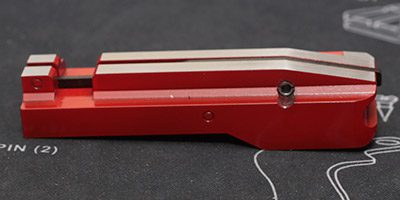 The only extra step I took in installation was to take some photos of the bolt before installing it.

Shoot. Then shoot some more

Our first range trip, we ran 100 rounds of bulk ammo without a hitch. This was expected, since it’s hard to mess up something as simple as a bolt. On our second trip, it had at least 250 rounds through it, and two failures to fire. The rim had a good dent each time, so it wasn’t due to light strikes. For the third outing, I put it in a Charger, and we used some different bulk ammo, and BX-25 magazines instead of the 10-round ones. At that point, it wouldn’t cycle. One bang, but no extraction. So I pried out the empty, cycled the bolt, and tried again. Same thing.

I was a bit concerned at this point, but it wasn’t the first time I had issues with BX-25 magazines. And that ammo didn’t seem to cycle consistently in the other .22 autos we brought that day. So I did what I should have done a while ago, and bought a used 10/22. Bone stock, and shamefully dirty, but with a smooth action. I swapped the Deadshot Arms bolt into it, and took it to the range. It ran non-stop for almost 200 rounds more. I still need to figure out what’s up with my Charger. But by using the bolt in a stock rifle, I eliminated any other variables. And I have another 10/22.

This bolt took a beating. Through 500+ rounds and three firearms, the closest it got to a cleaning was when it was swapped from one receiver to another. The hammer took some Gun Kote off the back. While in the stock rifle, the steel buffer also removed a bit. You can see clearly where the bolt face struck the barrel. There’s also some wear along the back edges. On the side that faces out, the top is missing some color. And that I attribute to the Brownells receiver it was in for a while. Overall, though, it still looks pretty good. 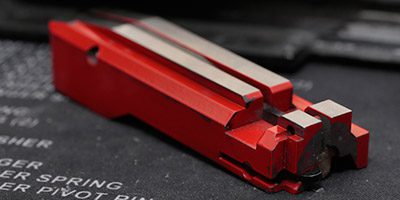 Is 500 or so rounds a comprehensive test of any firearms part? Probably not. But that many rounds of rimfire, with no lubricant, is a fair trial. I wouldn’t normally do that. Some people might. Other than the issues which were not related to the bolt itself, there were zero failures. The firing pin made solid strikes, and the extractor pulled every empty except for the few that were uncharacteristically stuck. Would I use one of these Deadshot Arms bolts in an actual match? Yes, because it should go bang every time with good ammo. Would I use them in custom build, or a plinker? Definitely. Based on my limited, but harsh test, it worked as well as any other bolt. And it looked better doing it. 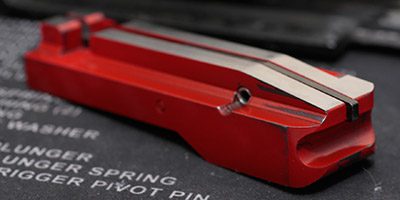 As mentioned, Deadshot Arms doesn’t have an online presence outside of eBay. But you can find their products here. Their bolts start at $79.99, with $7.75 shipping. That puts them a little under typical retail for a match bolt, but with the added benefits of the Gun Kote. They also offer Cerakote. Color options vary, so if you don’t see what you want, it might be worth asking. I’ve seen red, OD green, black, and even camo. As they get more of a presence, I’m sure they’ll add more colors. In the meantime, they won’t know what folks want unless they ask. I’m all for supporting the independent outfits that innovate and improve upon products to make them better. If you’re building a 10/22, or just customizing one, give them a look.