In researching chassis options for the 10/22, I came across the Engineered Silence website. Digging in a little bit, I was intrigued by their design. It seems that most manufacturers only make a single chassis for both the rifle and pistol (Charger) variants. At least one company makes two versions so you can get one for your Takedown as well. But Engineered Silence offers one chassis that works with both fixed barrels and Takedown models, via an inexpensive adapter. Owning multiples of both, this obviously caught my interest. So I reached out to Jon Fettig, the engineer behind Engineered Silence, for more info.

Not surprisingly, Jon is an engineer by profession. He’s also a fan of the 10/22 platform, and machine guns. And he holds a Type 07 FFL, allowing him to manufacture firearms. So while some of us feel like a kid in a candy store when we go to the gun shop, it’s different for Jon. Not satisfied with what was available, he started making his own parts and accessories. That includes his chassis and a suppressor, along with a few other clever pieces. He might be the Willy Wonka of 10/22s – he’s manufacturing the goodies. And though we can’t get our hands on his full-auto 10/22s, he’s made the rest available to us.

Each chassis starts as 6061-T6 billet, and finishes with a Type III Hard Coat anodizing treatment. This is an extremely hard, abrasion-resistant Mil-Spec treatment. It’s much more durable than a simple Type II anodized color treatment. When you’re paying for a premium chassis, details like this count. From the initial design, to the final machine work, everything is proudly done in America.

At 1.56″, the chassis maintains the slim profile of the 10/22. But inside and out, it’s fat with features. Some are pretty standard, others are quite innovative. For example, there are two anti-rotation QD sling swivel sockets. And it takes any AR-15 style grip. Both of those are fairly common these days. Less common is the tension screw to help lock your receiver in place. The threading on the back to accept a receiver extension is also not unusual. An optional thread-in 1913 adapter is available to add a 1913 rail section to the tail. But it integrates nicely, rather than looking like a bolt-on part. That makes for a secure attachment point for your folding brace or stock.

In addition to the stock adapter, there are a few other noteworthy accessories. First up is the M-Lok® handguard. It goes through the same 6061-T6 billet to Type III Hard Coat process. Weighing only 6 ounces, this 8-3/16″ two-piece free-float handguard offers plenty of mounting options. It includes all the necessary hardware, along with the correct IP15 Torx wrench for installation. The one feature that I appreciate the most is the mounting surface. On a takedown 10/22, the takedown latch block is attached to the barrel, and that is in turn attached to the handguard here. Which is where things get even cooler… 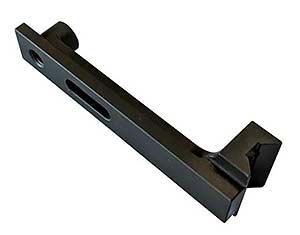 For owners of non-takedown rifles or pistols, the Non-Takedown V-Block adapter allows you to use this chassis and handguard. It installs just like a standard v-block. And the extension on it fits into the handguard, where the takedown latch block would go. For added strength, this part is billet steel, with a manganese phosphate Parkerized finish. So it looks great, even if you can’t really see it once it’s installed.

Your choices just got easier. Or maybe more difficult

In my collection of 10/22 variants are Chargers and rifles in both standard and Takedown configurations. That includes a braced Charger, and rifle with an adjustable stock. This one chassis from Engineered Silence can accommodate all of them. Fixed, Takedown, pistol, braced pistol, rifle, folding brace/stock, adjustable stock. Doesn’t matter how you want to build it, you can. Any stock, any brace, any grip, and just about any M-Lok® accessory. If you want options with your build, start here. 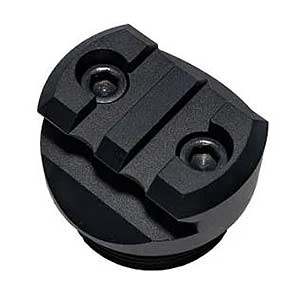 I’ve been a 10/22 enthusiast since I got my first one (right when I turned 18) over 30 years ago. And I have many of them (I can’t say exactly how many, because my wife does read my articles, but it’s more than a few). During that time, I’ve seen plenty of cool stuff, and some really innovative products. The Engineered Silence chassis and accessories certainly rates near the top of that list. Also, if you’re wondering why I didn’t list prices, it’s simple. No, it’s not one of those “If you have to ask, you can’t afford it” things. Sure, they are a premium product. But if you visit their site, you can view their current pricing. Then get on their mailing list, so that Jon can let you know when stuff goes on sale. Because he runs some pretty sweet sales. And if you’re ordering one, tell him you read about it here.