Introduced in 2007, the Ruger 10/22 Charger is the pistol version of America’s favorite .22 rifle. Out of the box, it’s not the greatest design though. It can definitely benefit from a pistol brace. There are some adapters for the factory nylon stock, which is isn’t very rigid to begin with. It also lacks options for attaching any accessories, and the overall length doesn’t accommodate a short barrel with a suppressor. Which makes the Deep Six chassis from Enoch Industries an ideal solution for a custom Charger. It’s got all the features you could ask for in a chassis

Machined from a block of 6061-T6 aluminum, the Deep Six weighs only 13 ounces. Overall length is 15.25 inches, and it’s 1.5 inches wide and 1.5 inches tall. The exterior surface has some shallow relief work as well. On the left side is an engraved Enoch Industries logo. It looks like quite a bit of machine time goes into each chassis. Inside and out, the finish is smooth and flawless. Anodizing options are the same price for either black or PEWter – $245. Blems are offered at $210.

Compared to their Odin chassis, the Deep Six offers more length and rail space, and more width. Want to run a 4″ barrel and fat can for “Hollywood” quiet? That’s easy enough with the extra width. It’s got a full 1.310″  inner barrel channel. I’m not sure there’s a rimfire suppressor out there big enough to be an issue with all the roominess. Any AR grip without a beavertail will fit the grip adapter. You might be able to modify one with a beavertail to fit as well. Both sides offer nitrided steel QD inserts, for anyone wanting to run a sling. And with a total of nine MLOK slots on the underside and sides, it’s got multiple accessory mounting options too. If you’ve got something you want to hang off your Charger, there’s certainly a place to hang it.

Unlike other chassis systems for the 10/22, the Deep Six is really designed with the Charger in mind. So it’s probably not the first choice for a rifle build. The rear Picatinny rail accepts the SB Tactical and Sig folding braces. While I tried the Sig brace, I really wanted a solid non-folding setup, and went with the KAK Shockwave. This required a Thorsden adapter to add a receiver extenstion. So yes, I have added an adapter to replace what is currently the hottest trend.

Although I don’t begrudge anyone their choice of brace, I am one of the few people who thinks a Charger doesn’t have to fold. It’s really compact already. I felt the SB Tactical braces were too flimsy, even the aluminum version. And they don’t lock up as solidly as I would like. So I tried the $200 Sig brace. Yes, it locked up great, open or folded. But I had no plans to shoot my Charger while folded, and it transports fine with a fixed brace. Plus, the clamp had to be mounted upside down, or it hit the back of my hand. In the end, that was $200 I didn’t need to spend. With a KAK, I get a repeatable cheek weld, and it works well with a red dot or scope. The fact that I’ve been using them on other firearms for about four years helped my decision as well.

My original build was done using a factory Charger receiver from S&P Outfitters. Once I realized how much I had into it, I figured it was best to upgrade to a Tactical Innovations Elite22 receiver. Well worth the extra money, in my opinion. Build sheet is as follows:

Per the manufacturer, note that “Tactical Solutions and TG2000 triggers may require gunsmithing for proper fitment“. 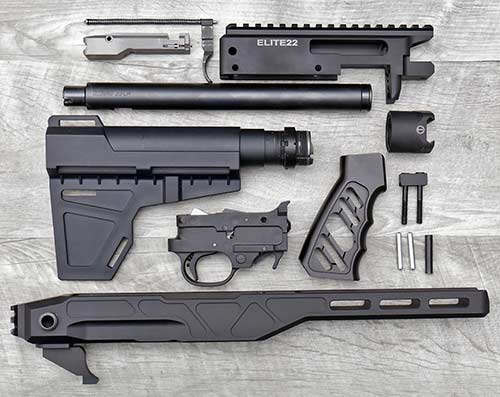 Installing the barrel action into the Deep Six is like any other 10/22 install. A single proprietary screw (it’s shorter) holds everything in place. What surprised me was how tight and solid the fit was. I guess that’s expected, but this is definitely a wiggle-free platform.

I’ve tried a Vortex Viper red dot, and a couple of different scopes. Had I built this with a lighter barrel, I’d probably stick with the red dot. Although I like the speed of the Viper, this barrel just begs to be used for some more precision shooting. We have some 1″ and 2″ steel spinners, and a braced Charger seems to be the perfect size to keep things fun and challenging.

At two full pounds for the barrel alone, I’ve got a compact, but not light pistol. The Enoch Industries Sixer (6″) and Niner (9″) barrels weigh less than an ounce per inch, which would save 23-26 ounces. Taking a pound and a half, or more, off the front of any pistol is going to make a difference in how it handles. One of the reasons I went with the KIDD is that I can have it cut down and threaded to whatever length I want. But that machine time isn’t free. So I’m almost certain that this barreled action will end up in some other project.

Enoch Industries provides some suggestions on barrels as well:

In use, the Deep Six makes for nice handling. Even with the heavy barrel, it balances nicely. I found that my hand rests naturally right where it tapers, just past the receiver. And a ten-round magazine with the TandemKross Companion magazine bumper installed is ideal for me. My fingers rest right on the magazine base. An extended magazine release that wraps around the trigger guard is definitely on my shopping list.

The only shooting I got to do was plinking with the red dot on there. Swinging from target to target, that heavy barrel can be felt. But with my support hand just forward of the receiver, and therefore the bolt, the weight is distributed well. It’s also offset a bit by the chassis. Turns out the factory nylon stock with grip and buffer adapter is three ounces heavier. Either way, it’s fun to shoot.

Everything about the Deep Six speaks to the engineering and quality that went into it. There are curves, bevels, and curved bevels. Just about every surface has some sort of machining, and it’s all done with a purpose. From the bottom of the handguard, to the reliefs in the sides, to the area just above the grip, it’s all functional. The photos don’t do it justice – you need to spend some time shooting it to really appreciate it.

There are probably more than a few reviews out there of the Deep Six with a shorter, lighter barrel, and a folding brace. So I guess this may be helpful for someone planning something a bit different. And yet, I am almost certain that I want to order another receiver, and start this build over with a lighter barrel. Enoch Industries offers more than one very high quality chassis, and the best way to take advantage of one is with a lighter build. Whether dropping a stock action in, or going full custom, this is a very solid base to start.

I’d like to thank Enoch Industries for supplying their chassis for this review. If you’d like more info on their products, or to get your own chassis, head over to enoch-industries.com.

Comments? Questions? Have any of our readers tried out either of the Enoch Industries chassis’? Feel free to share below.