It’s been a few weeks and a couple of hundred miles since I purchased my Wolftrax fatbike by Framed. Now that I have had some quality time with it, I have been inspired to name it “Odin.”

When I set out to buy a fatbike, I was told by riders and a few shops that my budget of around $1,000 would be an issue. If I wanted a solid bike with good components, I’d be hard-pressed to find a used bike, let alone a new one at that price. Retail for most fatbikes starts at around $1,300 and just goes up from there. However, there are companies like Framed Bikes who aim to challenge that trend with their full spectrum of fatbike models and prices reasonable enough to pique the interest of the “fat curious.” 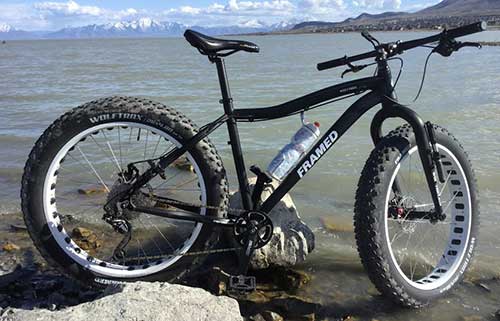 I test rode a few fatbikes and spent a lot of time researching many brands in order to make a good decision. One major thing I wanted to do was support my local bike shop. I figured that I would be spending more time with them once I had my bike, and there are just some things you can’t get from an online retailer.

A wise friend of mine counseled me to focus on the bike’s frame more than the components on it. His logic was that components can be upgraded over time, but the frame needed to be spot on. The Wolftrax features a TIG welded aluminum alloy frame (6061). The frame has a tapered headtube meaning that I can upgrade the fork to carbon or a suspension fork. A replaceable derailleur hanger rounds out some of the nicer features of this frame.

Framed Bikes offers the Wolftrax in many different configurations and they have an a-la-carte option too. Based on my budget, I decided on the Wolftrax SRAM X5 version which has an MSRP of $1,099. I headed down to my LBS and placed my order. Specifically, I wanted a black frame and white wheels. A few excruciatingly long days later, I received the call that my bike was in.

I picked up my bike faster than a seagull swoops on an abandoned sandwich. The black frame with the white accents was just stunning. Make no mistake, the Wolftrax is a sexy beast. It was  then that I was told that Framed had upgraded my bike to the Deore version for free. I was floored. Seriously, nowadays who does that? Framed Bikes does, that’s who.

I was really happy that Framed included a set of Wellgo composite pedals. This allowed me to put some miles on it while I researched which style of pedals I wanted to run with. However, about two weeks after I picked up my bike, I discovered that both of my composite pedals had developed cracks. I have not yet contacted Framed about this issue. 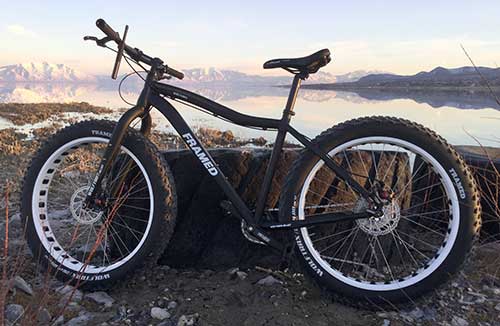 The Wolftrax Deore Alloy is a 1×10. It features Truvativ 32T, 175mm alloy cranks and Shimano Deore 10-speed, 11-36T cassette. I am used to a 3×9 setup, so I was concerned about a 1×10 setup. I was surprised that it only took me a couple of rides to get comfortable with the 1×10. The Avid BB5 brakes with 160mm rotors do their job well and are able stop the bike without issue.

The big question is, how does the Wolftrax ride? I feel that the geometry of the frame is more aggressive than the others I tried out and I like it more. It has a more sporty feel and has a spacious cockpit. The lock-on grips stay securely attached to the bar and are comfortable. The size Large bike weighs in at 34lb 4oz, which is average for a fatbike. I had no difficulty navigating through sand, mud, single-tracks, and crusty snow. It is really a blast to float over sand effortlessly. Sadly, I ended up getting my bike just at the end of the snow season, so my snow experience is limited. While I am stoked for summer, I’m looking forward to winter already. Riding a fatbike takes some getting used to. I found that on some tighter switchbacks, my tires didn’t dig in as much and I floated through them.

The Wolftrax’s 4” tires have some serious rolling resistance on paved roads. It makes sense; the more contact area from the tire, the more friction. It takes a lot more energy to roll on pavement. It actually is a workout. This brings me to another super cool feature from Framed Bikes. They offer additional wheelsets especially designed for their fatbikes. They’re called Fattie Slims. The Fattie Slims allow you to swap out your 80mm wide fat wheels for either a set of trail ready 29ers or a set of 29” road tires. With these optional wheelsets, I am able to make my Wolftrax a truly year-round bike. I am going to start scraping my money together for the trail ones.

One suggestion I have is to increase the number of cage brazeons on the frame. The standard alloy fork has three pairs of brazeons, offering lots of mounting options while the frame itself has just one pair. With the standard alloy fork, this is not a big deal. However, if I upgrade to a suspension fork, I will lose those brazeons on the fork and only have one set. Another set on the seat tube or top tube would offer me more mounting options for gear.

In anticipation for my Wolftrax, I purchased a set of pogies that included a pair of bar ends. When I brought it home, I tried to install the pogies and had issues with the bar ends not fitting right. I reached out to Framed and was left in awe by how amazing they are. After a short email exchange with a rep from Framed, they sent me out a new bar and everything fit perfectly.

Now, just so we are all on the up and up, I have never mentioned anything about writing a  review of this bike or anything to Framed. In fact, I was just starting to discuss the possibility of me writing for Industry Outsider after I ordered my bike. My treatment is just how they take care of their regular customers. Mad props to Framed.

I cannot recommend Framed Bikes enough. If you are looking for your first or your fifth fatbike, do yourself a favor and check them out. You can easily tell that they have passion for what they do. They make a killer bike for every level of rider and every budget. They put lots of thought into their designs and sell them at a fair price. I guarantee when it comes time for me to upgrade to carbon, I will be ordering from Framed.