It’s no secret that I really like the Tac-Hammer barrels from Adaptive Tactical. I’ve got one on my Charger Takedown, and it has not disappointed. When you’re building a rifle for accuracy, a rigid barrel helps. But even fluted, an all steel .920 barrel is heavy. This may not be a concern when shooting from a bench or rest. Since many of our rifles are used offhand, by adults and kids, weight is a factor. And so is overall balance. Which is why I like the steel barrel/aluminum sleeve design of the Tac-Hammer.

Adaptive Tactical’s Tac-Hammer’s Rigid-Core Barrel for the Ruger 10/22 (RCB-22) provides the rigidity and stiffness of a bull barrel, at a weight savings of about 40%. So they deliver greater accuracy and repeatability than a factory taper, with no weight penalty. Their rigid-core, stepped P4140 Chromoly barrel is encased inside a post-tension, aluminum shroud. This offers the rigidity of a .920 bull barrel with less weight.

The Tac-Hammer comes threaded for 1/2 x 28 compensators or suppressors, and includes a matching compensator. Overall length of the barrel is 16″, with the compensator adding another 1.25″, to bring it to 17.25″. It only weighs 30.68 ounces, or 870 grams for my metric friends. It’s got a 1:16 twist, and Bentz chamber, so I can expect good performance with standard ammo weights. Of course, it’s made in the U.S. of A. 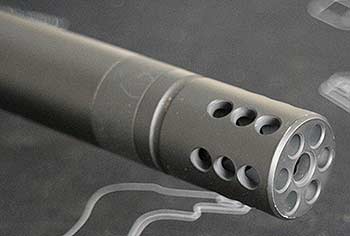 This is a really well done barrel. It’s got a nice matte finish, and towards the receiver, it’s very anti-reflective. Overally, it’s a ligher color, and not as shiny as the Ruger receiver, but it pairs well. As mentioned, I have the same one on my Charger. They both look great. Although it’s gotten beaten up a bit already, it seems like it should hold up well over time. My Charger doesn’t get babied, and it’s not showing many battle scars. Before anyone mentions that looks aren’t as important as accuracy, my experience has been that this barrel delivers in that area too.

One potential issue with a takedown rifle is the loss of zero when the barrel is removed and replaced. Adaptive Tactical solves this by offering their Tac-Hammer barrels with a cantilevered rail. By mounting the scope or other optic to the barrel, rather than receiver, this issue is eliminated. Of course, the rail can be removed, but ideally, it’s the best way to mount your optic.

That’s the good news. The bad news is that I wanted to use the Advantage charging handle from TandemKross on this rifle. It adds an extra charging handle to the left side of the receiver, which is pretty handy. Except that it includes a built-in Picatinny rail, making the integrated rail of the Tac-Hammer redundant. I’m going to do some accuracy tests to see if there is an issue with the receiver-mounted optic. If there is, I’ll look for a machinist to mill down the Advantage, to provide clearance for the rail. Because I really want to keep the left-side charging handle, but not at the expense of accuracy.

Installing a new barrel on a standard 10/22 can sometimes be a challenge. It’s no secret that barrel shanks and receiver dimensions are not always the same spec. There’s no such issue with a takedown, it’s just a matter of attaching the latch mechanism to the barrel. A little extra care should be taken to make sure it’s properly aligned, and that’s it. From there, it got bolted to the PMACA chassis forend. Again, I checked the gap on either side for alignment. If it’s not centered, it has to be taken apart and adjusted. It’s a critical step, which is less critical when using the rail mounted on the barrel. Just something to consider.

With the barrel installed, all that’s left is to mount the scope, and go break in the barrel. Once it’s broken in, I can start shooting for groups. Although I have a variety of ammo on hand, I prefer to see how much accuracy I can wring out of bulk ammo. Because that’s mostly what we shoot. (When you’re shooting for fun with friends, it’s easy to go through 1,000 rounds) So we’ll see how well it does with cheap stuff, before deciding if we’re going to try the expensive ammo. In the meantime, if you have any questions or comments, feel free to share them below.