GSI Outdoors had made a name for themselves by providing great outdoor gear. Their latest venture into the insulated bottle market is another addition to their product line. The Glacier Stainless Microlite 500 is a great grab and go bottle. I’ve been using the Microlite for a few weeks now and it really is a nice, light bottle. The Microlite is stainless and weighs in around 8 ounces. What I have really enjoyed is the size of the bottle. Just enough to hold a pint of water or tea. Most of the disposable, plastic bottles we get at the store or at outdoor events are the same size and easily fit in the Microlite without wasted space. 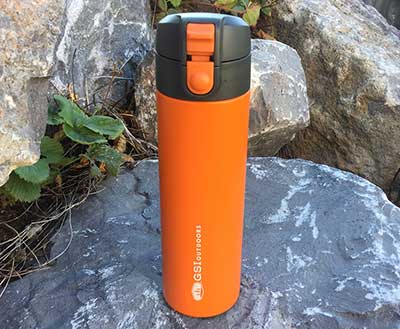 The Microlite is a vacuum bottle and can keep drinks warm for most of the day. I have been able to enjoy warm tea in the afternoon that I made in the morning. It also does a good job keeping my water nice and cool. GSI added a rubber foot to the bottle to make it extra grippy on slippery surfaces. It would be great to have the bottle itself have a strip of rubber or other grippy material to help when holding it, particularly with wet hands.

The lid is spring loaded. When the button is pressed on the bottle, the lid swings open. I really like that the button also has a lock to prevent it from being accidentally pressed.

One thing that annoys me with many bottles is when they have a straw. With a straw, when I really want to just down water, I get just a pittance of water for my efforts. There isn’t a straw in this bottle. I just have to pop the top and chug. The cap has a generous mouth and an air opening to let air in as fast as I can pour the water out. It is also dished to prevent spilling. 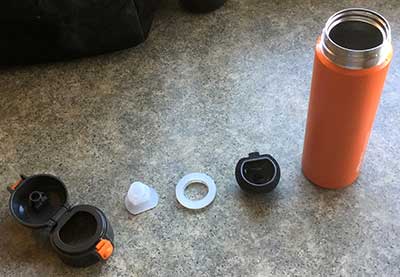 Another great feature of the Microlite is that it can be completely cleaned. The entire cap can easily be taken down and each part can be inspected and washed.

While a cool bottle, there are some things that should be mentioned. GSI markets this bottle as ⅓ lighter than other bottles on the market. However, it is also smaller than other bottles. Most bottles are 24 ounce bottles, the Microlite is 17 ounces. The Microlite bottle does not fit in a standard bike cage, but fit into every car cup holder I tried it with.

My biggest disappointment is the durability of it. It was bumped off of a table and fell around 3 feet onto the wood floor. The cap’s lock snapped and now the lid won’t close.

Overall, I really like the Microlite 500. Its design lets my drinks flow freely and it’s a great carry-around bottle. And the size is a nice compromise with portability and hydration needs. I just wish that it was more durable. It carries an MSRP of $25.95. For more info on the Micolite 500 visit GSIOutdoors.

I’d like to thank GSI Outdoors for providing their Microlite 500 for this review.

Follow up to this article: GSI sent me out a new lid and I immediately recreated the drop that broke it before and it took the fall like a champ. No issues and works great. Maybe I should avoid Vegas with my luck…