Tom Hennessy is an early pioneer of camping hammocks and his company is still going strong for good reason.  Hennessy makes well thought out, easy to use, durable, and most importantly, comfortable hammocks.  The Hennessy Deluxe Explorer Asym Zip is exactly that. 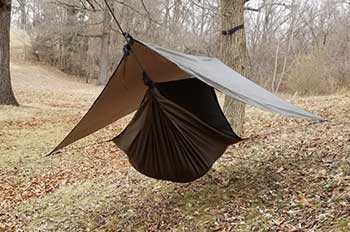 The Hennessy Deluxe Explorer Asym Zip is a single layer, gathered end hammock with an integrated bug net.  A heavy-duty zipper opens one side of the bug net from the hammock body and allows entry into the hammock.  Strong cordage at both ends of the hammock is used for the suspension.  Hennessy goes old school to secure the suspension with a figure 8 lashing.  This is a simple sort of knot to tie but you must get the hang of it.  There are lots of great tutorial videos for this lashing, including one made by Hennessy.  When done right, the lashing holds extremely well, and I like using it.

A structural ridgeline overhead both holds up and bug net and makes for consistent hammock setup.  A structural ridgeline is a piece of smaller cordage that connects one end of the hammock to the other.  Since the ridgeline won’t stretch, the hammock sags or hangs the same every time.  You get consistent, quick setup and Hennessy includes a ridgeline organizer with the hammock.  The organizer is big enough to hold, a headlamp, cell phone, gloves, or other small to medium sized things you might need through the night.

The Hennessy Deluxe Explorer Asym Zip comes with an asymmetrical tarp.  The shape of the tarp is sort of a skewed diamond shape.  Since the most comfortable way to sleep in a hammock is laying diagonally, the tarp is shaped to cover the head and feet and save weight by trimming excess in other areas.  The Hennessy tarp can attach right to the hammock suspension.  This feature makes for quick and easy setup but limits the setup options.  Regular tie outs are on the tarp in case you’d like to set it up higher or lower than the ridgeline allows.  The tarp gives enough coverage for milder weather or times when blowing wind and rain aren’t an issue.  You can upgrade to a larger tarp and I’d recommend that if more severe weather is expected. 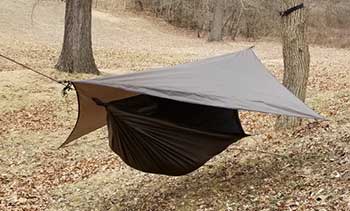 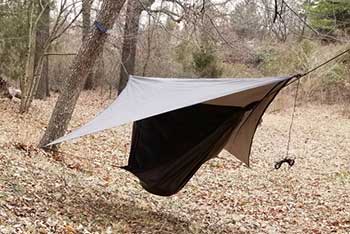 The Hennessy Deluxe Explorer Asym Zip system in the stuff sack weighs 3.9 pounds on my scales and it packs down to the size of a gallon of milk roughly.  This isn’t the lightest hammock system on the market, but it is tough for sure.  The hammock is rated to hold a 300-pound occupant and I overloaded it on purpose.  The hammock never flinched, and it handled high wind, thunderstorms, my dog with ease.  If you are a bigger camper this hammock will do the job for you.  I do have to say to never put more than the recommended weight in a hammock.  I took steps to make sure everyone was safe during testing.

The Hennessy Deluxe Explorer Asym Zip sells for $199.95 on the Hennessy website.  Since the hammock, suspension, rain fly, and tree huggers come in the package, I think this is a good value especially for a hammock newbie or someone needing the weight rating.  This is a tough, comfortable, great hammock.  Click HERE to check out the Hennessy website.

Thanks to Hennessy for sending out the hammock system for testing and review.  We have to live on a budget too and being able to write these honest reviews hopefully benefits everyone.