You don’t have to be a prepper to appreciate the Henry Repeating Arms U.S. Survival Pack. Even though ammo prices haven’t come back down to dirt cheap levels, who doesn’t love a .22 rifle? And the AR-7 is ideal as a truck, ATV, cabin, or camp gun. Packing inside its floating stock, this lightweight rifle takes up little room. So you can always have it with. For 2018, Henry decided to bundle it into a kit with some useful emergency gear. And I can’t think of a better day to share this all-American rifle (and accessories) than July 4th.

Henry’s AR-7 is one of the most beloved .22 rifles around. Well, some love it, some maybe not so much. But it’s been refined over the years for accuracy and reliability, and I have no complaints. I’d rate the current model accurate enough for small game, so it gets the job done. Plus, it’s fun to shoot, so empty soda cans should fear it too. Originally built for stowing in a plane, the two eight shot magazines, action, and 16″ barrel all fit in the plastic stock. At only 16.5″ for the entire 3.5 pound package, you’ve got no excuse not to pack it with you. That low weight is due to an aluminum receiver and steel barrel with plastic sleeve. Sights are a blade front and aperture rear, with some adjustability.

After prying the rear of the stock off, take out the barrel, and set it down. If not, you’ll eventually drop it, as nothing, not even friction, holds it in the stock. Then remove the action, and place it in its groove in the stock. Tighten the screw running through the grip to secure the action. Once the action is in place, line up the barrel, and use the collar to thread it into the action. Reverse that to disassemble it. With very little practice, the AR-7 can be ready to fire in under a minute.

Since they only hold 8 rounds, the magazines load quickly and easily. Slide them into the receiver, rack the slide with the tiny lever, and chamber a round. Note that there is a safety on the receiver. Push back for safe and forward to fire. After years of shooting a target .22 that weighs at least twice as much as the AR-7, my first shot was a bit of a surprise. No one expects recoil from a .22, but there is so little weight, it does move. Not at all unpleasant, but still caught me off guard. Rapid fire at 15 yards resulted in a group about the size of a quarter. Slow fire at 25 yards yielded somewhat better results. Certainly good enough for making meals out of small animals, even with my poor vision. 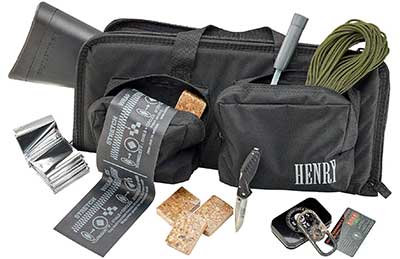 Everything in the Survival Pack, plus the Allen brand pack itself, is made in America. That’s because Henry states “Made in America, or not at all”. Food, shelter, fire, and water are emergency essentials. So the pack includes a mylar blanket for warmth and signaling. Plus an Esse fire starter. And Aquamira’s Frontier Straw water filter. Providing 1,000 calories is a Datrex food packet. Rounding it out is a Buck knife, SWAT-T tourniquet, and 100 feet of 550 paracord. It may not be everything you need, but it’s certainly more than a good start. And there is plenty of room for a box or three of ammo. 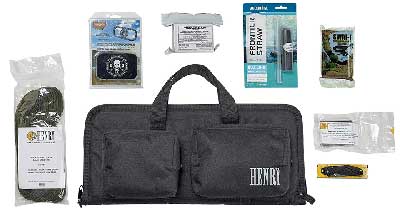 I didn’t give each item in the Survival Pack a full test. That is to say, I didn’t go looking for bad water to test the Aquamira Frontier Straw water filter – it’s known to be effective. Same with the Esse fire starter, mylar blanket and paracord. Pretty standard items, so expect no surprises there. And even though I used the Buck knife, I didn’t get an opportunity to try out the SWAT-T tourniquet. The Datrex food packet is made from wheat flour, vegetable shortening, cane sugar, water and coconut flavor. It’s also free of peanut products and non-GMO. Overall, the Survival Pack is a great start. I’d add some basic first aid items too, and a few more palatable food items.

By itself, the Henry AR-7 retails for around $250, depending on where you shop. Their MSRP for the full kit is $550, but I’ve seen it advertised around $400. At that price, it makes sense for a couple of reasons. First, you get the perfect size bag, and a good collection of survival necessities. If you’re putting together your own kit, it’s a solid base to start with. Second, it’s got enough of the basics that even if you don’t add to it, you’re still covered for most emergencies. So get one for your cabin, four-wheeler, or give one as a gift. In an emergency, it will be appreciated. And for plinking, you still can’t beat a .22 for fun. Of all the firearms we take the range, my kids certianly enjoy it the most. Check it out, along with the rest of the Henry line, at HenryUSA.com.

I’d like to thank Henry Repeating Arms for providing their Survival Pack AR-7 rifle kit for this review. It’s been on my list of firearms to try out for a long time, and certainly didn’t disappoint.