Just when I thought I was set for magazine couplers, High Tower Armory sent me some of theirs. And that changed my opinion of what constitutes the best design. As a recap, couplers are nothing more than a way to attach a pair of factory Ruger 10/22 magazines together, base to base. They provide more capacity, in a compact manner.

Although at 0.9 ounces, it’s twice the weight of the competition, they make better use of that weight. The plastic center portion is full-length, and has more solid contact. In the center of the clamp is a steel internal hex bolt. Thanks to the full-length body, there is an included hex key that fits neatly inside. It’s the same size as the factory bolt, making it handy for magazine service. 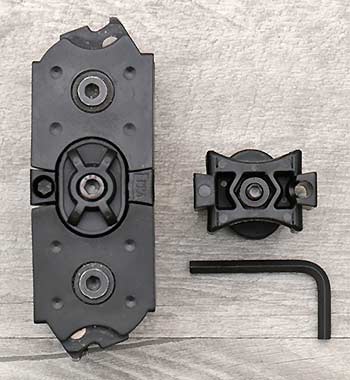 Since the wrench is already included, all you need is two BX-1 magazines, and less than a minute of time. The center piece fits very snugly into the base of each magazine. Because of that, it’s not a “sloppy drop-in part”. It’s not exactly time-consuming either, but the parts need to be lined up well. From there, just install the clamp on the front and tighten it down a bit. As always, be sure to stop when it’s snug. Overdoing it will break the clamp.

As expected, I used the coupler with every 10/22 variant I could get my hands on. I had to borrow a Ruger polymer stock to check fitment for those with factory furniture.  As far as aftermarket setups, I tried a Magpul Backpacker*, Fab Defense UAS, and Hogue Overmold. And then my chassis collection, which includes a Crazy Ivan Comp Lite, PMACA takedown, PMACA multi, Midwest Industries, and Enoch Industries Deep Six chassis. If a Ruger 10/22 factory mag fits, this will work. 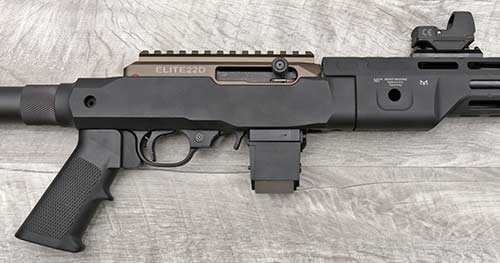 A pair of empty coupled magazines weighs 4.8 ounces on my scale, so it’s still not affecting balance with that small amount of added weight just in front of the trigger. Nothing changes are far as loading the magazines as well. Push in ten rounds, flip it over, and push in ten more. Inserting them is no different, although it may actually be a little easier, with the extra length working as a handle of sort. When it’s time for a reload, the extra weight helps it to drop free. A quick flip, and you’re ready to shoot ten more rounds. There’s no clearance issues with my extended magazine releases, which are the short paddle style.

I’ve read about issues with higher capacity magazines not seating properly, and causing feeding issues. Again, the bit of added weight didn’t cause any for me. I’ll consider that an advantage. For the record, the coupler with two magazines weighs the same as an empty BX-15  magazine, and a little less than the 6.8 ounce BX-25.

Previously, I covered the advantages to coupled magazines. Obviously, the main one is doubling capacity. But it does that far more efficiently than the larger factory magazines do. Looking at the image below, you’ll see a BX-25, BX-15, the coupled BX-1s, and then a solo BX-1. Note that it’s half the size of the BX-25, while offering 80% of the capacity. And it’s more compact than the BX-15, while still having an extra 1/3 additional capacity. When seated in the magwell, it’s even less space too. Flipping it over may be a small inconvenience, but the reliability of the BX-1 over larger magazines should make up for that. 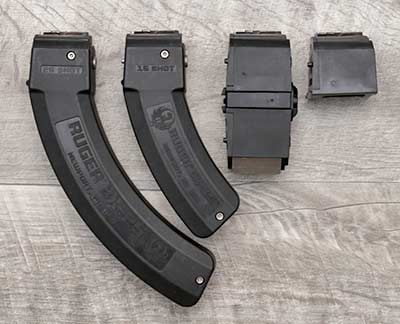 When shooting offhand, it can make magazine changes faster, especially if you have a snug magwell. It won’t hit the bench or your rest when shooting at the range. Living in Utah, we have no “high capacity” .22 rimfire magazine limits. But if your state does, move. If that’s not an option, then this is. Other benefits include being able to carry hollow points or round nose ammo at the same time. And switching from subsonic to supersonic with a flip of the magazine. I’ve also noticed that this makes magazines easier to locate in my overstuffed range bag. When it comes time to service your magazines, it removes easily with the included wrench.

For most 10/22 owners, the itch to accessorize comes on strong at some point. And that can get expensive. No so with these magazine couplers. They’re on sale for $9.99 at the time of this writing. That’s makes it easy to buy up a few. Which I highly recommend, as magazine couplers make my list of favorite 10/22 accessories. And I prefer these for their slightly lower profile. The hex head bolt is nicely integrated into the design, and looks less “tacked on”. This may be a small detail, but when viewed side by side, this model clearly looks better. And of course, they are made right here in America.

*Although they work fine with the Magpul Backpacker stock, in the “stored” position these don’t quite clear the .920 barrel. If I’m able to test them with a standard taper barrel, I’ll update this review.

The High Tower Armory couplers used in this review were provided by the manufacturer. For those not aware, they also make some of the best 10/22-compatible magazines, as well as other great accessories, including the 90/22 kit as pictured below. Check them out at HighTowerArmory.com.

Comments? Questions? Have any of our readers tried out the High Tower Armory magazine couplers? Feel free to share below.