For quite some time now, I have followed HomeGunsmithUnger on Instagram. It’s run by Sebastian Unger, of Austria. He’s a firearms enthusiast who took the unusual step of creating his own 10/22-compatible receiver from scratch. At home, in his spare time, on an old mill. His “OpenTop” receiver is designed with a forward rail, and an easily removable top cover. The logic behind the sliding top cover is simple. Every other 10/22 receiver needs to be removed from the stock/chassis to service the bolt. This allows the bolt to be removed via the top, simplifying maintenance in the field. It’s a very innovative design, which I will try to cover in more detail in a later article. For now, the photos tell most of the story. 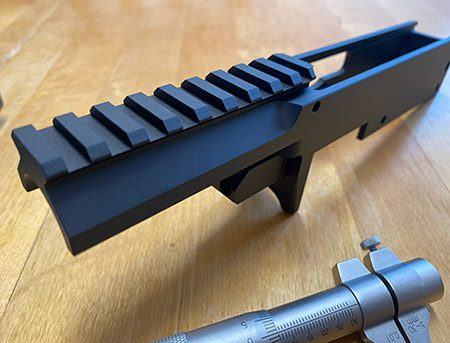 I’ve been following along for close to two of the three years he’s spent bringing it to market. And now that it’s available in Europe, I figured an interview was in order. While my plan was to simply email him a list of questions, that changed in an unusual way. We met last week for a chat over Instagram, a medium I never expected to be used for interviews. But it worked out very well, although the questions were interspersed into our conversation. Below is a reformatted version of that conversation, minus some unrelated banter. 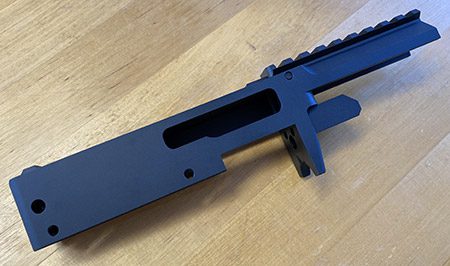 Q: How long have you been interested in firearms?

A: 2009 I bought my first gun. a Mosin Nagant because Karabiner 98k were out of stock

Q: So which came first, the design process, firearms interest, or working with metal?

A: I was always interested in firearms, I started with 14 years old building an AKSU with 45 RPS (rounds per second) ROF (rate of fire). Some day I became interested in how those things are made, which lead to working with metal and studying it in depth. It took me approximately 11 years to reach a point where I can build everything including the tools. Building a cut rifling machine won’t be a big deal anymore. Overall my firearms projects forced me to learn all those things.

Q: Is your receiver your the first product you’ve designed from the ground up? If so, what compelled you to create this new design?

A: Yes, it was one of the first things I have designed and milled from complete scratch. I thought it has some potential so I didn’t want to show it to somebody before I have applied for the patent. I have sold my 10/22 because I hated to clean it and one day it came to my mind it would be great if it could be opened from the top. So I have built it. I consider the 10/22 as the superior semiautomatic rimfire rifle design so it was worth the effort for me. The rifle is affordable, reliable, the trigger is nice and there are many pieces sold, so there are a lot of potential customers for the idea/product

Q: What is the typical time from the lightbulb going off, to finished product?

A: In this case it was 3 years, I have lost a few months waiting for companies that promised things but overall it was good to take this time. I have analysed the comments and always improved the product to the final version, it a different design compared to the very first prototype. It holds zero 100%, is CNC machinable, easy to assemble but also durable and and at this point I can say that I am satisfied with the product and it was worth those 3 years

Q: How many versions of the receiver did you go through before you were satisfied with the design?

A: It is hard to count, I would say 6-7 versions. but from version 5 to 6 I made thirty little improvements. From 6 to 7 only five. After I got the first CNC prototypes I started to improve all the little details and test them. Just an example: the magazine hole had some wear on the anodizing after several 100 mag changes, so the anodizing thickness was increased to 0.05mm. I have also added a slight angle that is not even visible so the 10 round magazine slips better into the hole in the front of the receiver. I never had any functional issues but I wanted a really satisfying product, so I worked on all this things. Now it’s time to see what the customers will say (the first ones are super happy with the product). 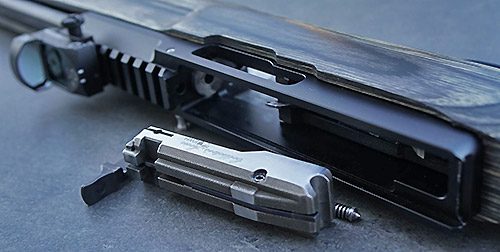 Q: Tell us about the receiver. The features, and what sets it apart from the competition

A: It offers a functional advantage, easy fieldstrip in seconds without any tools, cleaning of the barrel the bolt and the trigger group. It”s not marketing voodoo B.S., its function. The first customer told me that every 10/22 should be delivered like that, that this is like 10/22 2.0. I am still 100% sure that this would be a complete success if a big US manufacturer would produce it in license.

Q:Was there ever a point where you had a product failure, or red tape, or something in the patent process that made you want to give up?

A: No, not a single prototype ever failed, even with CCI Stinger, I thought I could maybe crack it but it was never possible. Several 1000 rounds CCI Stinger with the original steel (buffer) made nothing. The patent process was flawless but ridiculous expensive ($17-18k USD). I made some kind of pre-patent because I thought I could sell the idea early, that raised the costs, but the lawyers did a great job. Some manufacturers told me that they want to produce it but quit on the project without any reason, that was disappointing, but I never was at a point were I considered giving up. on a point.

Q: Which European countries is it currently available in?

A: I can ship it everywhere its legal if the customers have the necessary permissions.

Q: How are the prospects looking for availability in America? Any ETA?

A: I am in contact with some US manufacturers that showed interested, they also have the 3D files and critical tolerances to get prototypes done, but there is no offer at the moment so I cannot tell you an ETA. Getting the patent and having happy customer changes the situation. I am optimistic and my goal is 2021 for the US market. I could export the receivers to the USA but they need to be ATF approved and I would need somebody to import them, which is also not so easy.

Q: With your receiver now in production, what are you going to tackle next?

A: At the moment I am designing a barrel tuner to see to which level of accuracy a Ruger 10/22 can be improved. At the moment I am also working on new videos about the receiver. I have a new innovative project after this project, but I cant speak about it at the moment.

Q: Thank you again for taking the time to chat. Is there anything else you’d like to share with our readers?

A: Stay focused, believe in your dreams and never give up.

At that point, we went back to chatting about Austria, and other non-firearm-related topics. There’s no US distributor at this time, but as he mentioned, that’s something which he is working towards. His website is still under construction, and I will update this post when it’s ready. In the meantime, you can find him on Instagram, as well as Facebook and YouTube. For European sales, email office@ungerarms.com.

Comments? Questions? Have any of our readers been following him on Instagram? What do you think of this receiver design? Feel free to share below.