The Lowa Aerox GTX Mid Surround boots arrived at the house for testing late last winter.  We at Industry Outsider are big fans of Lowa footwear, so I was looking forward to trying these on.  Lowa has been making boots for something like 95 years, and they’ve learned a thing or two about making boots in that time. These boots felt incredible on my feet right away. They’re like comfortable house shoes going on, but they are plenty tough on the outside.

Lately, I head over to the local park and try to knock out about 4 miles of walking on my lunch hour.  The Aerox GTX Mid boots are a great choice for those brisk walks and they worked great on slower paced, longer day hikes with the family.  At my day job, I sometimes go on all-day outdoor inspections that require lots of standing around, squatting, and climbing on equipment.  These boots haven’t let me down yet.

A friend and I did an overnight 16-mile backpacking trip and I wore the boots on that outing as well.  Heavy rains just before and light rain during the hike made for a wide range of trail conditions.  We walked across dry, rocky ridges and through slippery rock fields in drainage areas.  At one point, the trail went straight up a rock formation that had become a waterfall.  The Aerox GTX boots kept my feet dry and gave good traction all the way up.  I had a little trouble getting a good footing to start the climb but that is no fault of the boots.  I think I’ll stick with a boot like the Lowa Sesto for most backpacking trips, but if you are part of the light and fast crowd, these may work great. 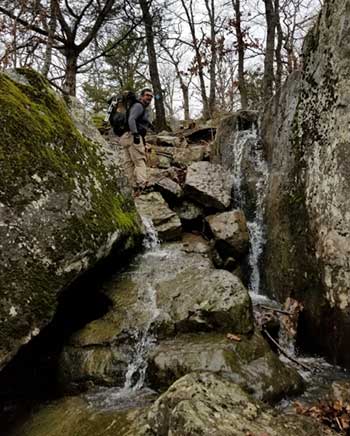 The Aerox GTX Mid Surround boots use Lowa’s Monowrap support frame, and the frame of the lower extends onto the upper of the boot.  I don’t design footwear for a living, but I appreciate the stability of these boots.  My weak ankles did well, and my sometimes-sore arches were fine too.  Those holes on the mid-sole of the boots are not just for looks.  They work with the GTX surround membrane to vent heat and moisture out from under the foot.  I have no way to really test how much they work but I can say that my feet stayed dry and cool while wearing the boots. 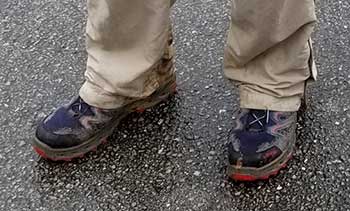 Fit and Final Thoughts on the Aerox GTX Mid Surround

I wear size 11 shoes generally and that’s the size of the test boots.  The Aerox boots fit my feet perfectly, and the toe box seems a bit roomier than some other Lowa models.  The arch support worked well for me and I did just fine with the included insoles.  The soles protected my feet from stone bruising, and they don’t roll out from under my feet.  This pair of boots weighs a bit over 33 ounces on my scales with a little dirt and trail crud on them.

The Lowa Aerox GTX Mid Surround boots are hand crafted in Slovakia, and the Lowa quality is there.  The upper of the boot is microfiber and synthetic material.  I like the styling, and the color choices are bright and bold without going crazy with it.  Fabric loops and one open hook handle the shoe strings.  All Lowa boots use a PU midsole which lasts longer and is more environmentally friendly.

The Lowa Aerox GTX Mid Surround boots have an MSRP of $240 and they are available in a few colors.  Lowa says these boots are “an extremely breathable/waterproof, lightweight, do-it-all outdoor athletic shoe” and I agree with them.  Lowa footwear is top quality gear and yes, high quality costs more up front.  Considering how long the boots will last and how they protect the feet, I think they bring good value.  Check them out at lowaboots.com to see the full lineup from Lowa.

I’d like to thank LOWA for providing the Aerox GTX Mid Surround boots out for testing and review.