Lowa offered to send out a pair of Sesto GTX Mid boots for testing and I could hardly wait for them to arrive.  Knowing the quality and comfort of Lowa boots, I was excited to give them a try.  The Lowa Sesto boots felt great on my feet right out of the box and they only got better with a little break in.  Lowa has been making boots since 1923 so they really know how to make great footwear.

After wearing the Lowa Sesto boots on several 3 to 4 mile fitness walks, to work, and on a few short hikes, I got the chance to visit the ruins at Devil’s Chasm in Arizona.  The trail to the old ruins is a little less than 3 miles one way and the change in elevation is around 2400 feet.  Three miles doesn’t sound like a lot but this is a pretty challenging hike.  The trail covered all sorts of terrain from a dry waterfall rock bed to steep loose climbs to narrow slippery sections.  The Lowa Sesto boots kept my ankles stable and supported my feet through it all. 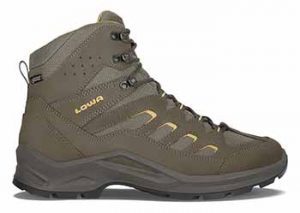 At the end of long hikes when my legs are tired, the Sesto boots still manage to provide stability and comfort.  The boots use Lowa’s Monowrap support frame.  The frame of the lower extends onto the upper of the boot and while I’m not a shoe designer, I can definitely appreciate the stability of these boots.

My shoe size changed a bit lately and I wear size 11 shoes now.  The size 11 Sesto boots fit my feet perfectly.  My feet are not narrow, but the foot box might be a bit tight for some folks, so take that into consideration if you have wider feet.  The included insoles have a nice arch support and I did not find myself wanting to replace them.  Plantar fasciitis reared its ugly head for me lately but never became a problem while wearing the Lowa Sesto boots. 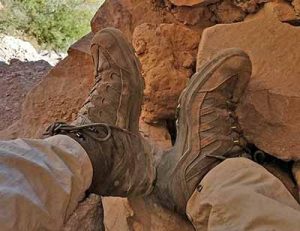 The construction of the Lowa Sesto GTX Mid is superb.  These boots are hand crafted in Slovakia so you know everything is done the right way.  The upper of the boot is split leather and fabric and waterproofing is handled with a GORE-TEX lining.  Fabric loops and open hooks take care of the shoe strings.  The Lowa Multicross Evo soles gave great traction wherever I went.  All Lowa boots use a PU mid sole which lasts longer and is more environmentally friendly.  Click HERE to see what Lowa has to say about it.

I can’t find anything to not like about the Lowa Sesto GTX Mid boots.  From day one, I’ve had no discomfort when wearing them.  They haven’t caused any blisters and they protect the feet from stone bruises well.  On our Devil’s Chasm hike, I wasn’t kind to these boots.  They were scraped on rocks, dragged through sand and dirt, and scrubbed on cactus. And they still look great.  Aside from being dirty, the Sesto’s are as good as new.  My size 11 boots weigh just over two pounds, so they don’t feel too heavy on the feet.

The Lowa Sesto GTX Mid boots have an MSRP of $185 and they are available in a couple colors.  Their price is in line with top notch boots but given the toughness and reputation of Lowa footwear, you’ll get your money’s worth.  Check them out at HERE or go to lowaboots.com to see the full lineup from Lowa.

Thanks to LOWA for sending the Sesto boots out for review.