My Lowa Vantage GTX Mid boots arrived just in time for fall backpacking. I’ve owned one other pair of Lowa boots so I knew what to expect in terms of quality. After walking many miles in these shoes, I can say that my expectations have been fully met. These boots have been worn to work many days, taken on an 8 to 10 mile overnight hike and were used to complete a 26 to 27 mile hike of the Buffalo River Trail. I haven’t had a single blister while wearing them, and they have protected my ankles well.

Lowa lists the Vantage GTX Mid as a trekking boot and says trekking boots are “Ideal for extended treks, moderate hikes over mountain terrain, easy hut walks and demanding single-day hikes.” During the trip on the BRT, I carried a 40 pound pack for about 3 days total. We pretty much broke camp by mid-morning and walked all day. The trail was varied with some steep ascents/descents, stream crossings and muddy sections, and lots of rocks and obstacles to test toughness. The Vantage boots performed like a champ. My feet stayed dry with no stone bruises from pounding them on the rocks, and except for a couple hot spots, again no blisters, they felt great. The Vantage GTX Mid boots provided great support for both feet and ankles. 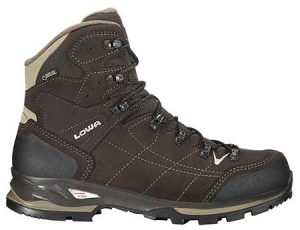 Like all quality boots, the Lowa Vantage GTX Mid boots felt really good on the feet right out of the box. Very little break in was required. There was a bit of an issue with the inside of the ankle on my right foot. Perhaps I’ve got bony ankles, but if I laced the boot too tightly, some pressure was applied to my ankle. Adjusting the laces pretty much solved the problem and now the boots have formed to my feet. Size 10 ½ to 11 shoes are what I wear. Since my old pair of Lowa boots were size 10 ½, I chose that size. While the Vantage boots felt fine at first, I did notice my toes at the end of the boot once in a while. Taking the boots on the long trip on the BRT caused no problems with sore toes but you might consider going with a size up if your feet are in between sizes like mine. 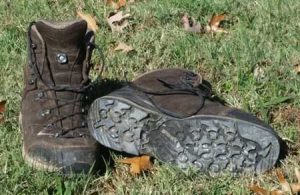 Find them on Amazon!

It almost goes without saying that construction of the Lowa Vantage GTX Mid is top notch. Lowa has been making footwear for almost a century now, and these guys know what they are doing. Split leather and CORDURA® are used on the upper of the boot with GORE-TEX® in the lining for water proofing. TPU toe and heel guards add to the toughness of the boots. Lowa’s X-lacing system is used on the tongue to hold it in place. I’ve always been annoyed by the tongue of my boots sliding to one side or the other but not with these boots. The Trac® Lite II outsole provides great traction. I normally replace the insole of any shoes right away but the Balance Comfort footbeds of these boots were just fine for me.

In short, I really like the Lowa Vantage GTX Mid boots. There isn’t anything to complain about. So far they have been tough as nails and very comfortable. Perhaps I should have gotten a half size bigger but there have been no problems with sore toes so far. The weight of the boots is 1130 grams, so they don’t feel too heavy on the feet and those grams are used wisely to provide a lot of comfort and support.

The Lowa Vantage GTX Mid boots have an MSRP of $245 and they are available in 3 colors. Check them out here or go to lowaboots.com to see the full lineup from Lowa.

Thanks to LOWA for sending the Vantage boots out for review. Like most people, we have limited budgets for gear and it is nice to be able to pay it forward by passing along information that benefits everyone.

← NiteRider Lumina OLED 800
Nite Ize: Give the Gift of Innovation →