The Morakniv Kansbol is a great all-around knife. It does an impressive job of balancing form and function, tradition and modernity, and quality and affordability. It passes the Mick Dundee test (big enough to get you in trouble for open carrying it in some states), but probably isn’t quite big enough to be a serious bushcraft knife. That’s not to say it’s not capable, however.

The Kansbol is named after a fäbod (a small collection of cottages and barns in the woods where a village would traditionally summer their cattle) near Mora. Lovingly printed on the box are the actual coordinates to this location. The companies that would eventually conglomerate into Mora of Sweden in 2005 (renamed Morakniv in 2016) have been making knives in the same village in Dalarna County in the heartland of Sweden since 1891. But the heritage of knife making in Mora goes back over 400 years.

All Morakniv knives are manufactured start to finish at their headquarters in Mora. Swedish steel hardened using a proprietary and closely guarded heat treating process brings the Sandvik 12C27 stainless steel in the Kansbol to 57-58Rc. It offers good durability and tight microstructure that can take and hold a very sharp edge. 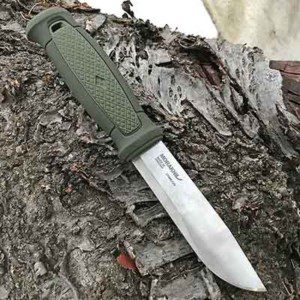 The Kansbol is essentially an update on the Mora 2000. This capable outdoor knife has become ubiquitous in the forests of Sweden since its introduction in the early 90’s. The blades of the two knives are essentially identical, at 4.3”. A profile grind on the front half provides precision along with the famous Scandi grind edge. This makes it easier to sharpen and keep sharp.

Along with the Scandi and profile grinds, the Kansbol’s spine is ground with edges that can be used with a fire starter. The shape of the handle is evocative of the classic wooden Mora handle (their literature refers to it as a “coil” shape). But it integrates a drop guard in the front to protect your fingers a bit while improving grip and handling. The butt also has a drop flare on the bottom side, and a lanyard hole if you want to put a tether or rope on it.

The handle is similar/identical to the one on the Eldris and the full-tang Garberg. But the highlight of the Kansbol’s handle is the rubber polymer outer layer, which improves the grip significantly and reduces fatigue with extended use. The knife is also exceptionally light for its size, weighing only 4.7oz at 8.9” total length. That’s less than half the weight of the Garberg, which again helps with precision and fatigue. It almost feels ethereal to hold and use, being so light with the grip that is just the right amount of supple. The symmetrical design also makes this knife great for right or left handed use. And unlike many of their other outdoor knives, is well suited to forward and reverse handling.

One of my favorite things about this knife, though, is the modular sheath system. This is a pretty innovative design that almost surpasses the design of the knife itself. Like the knife, the polypropylene sheath is inspired by classic Mora designs, and is likewise symmetrical. There are two drain holes in the bottom for ventilation, and some neat traditional flairs like the Mora emblem and heart-shaped style lines. My wife’s favorite thing about the sheath is that the knife click locks into it. So you don’t have to worry about it slipping out when you bend over or leave it in a drawer or pack. 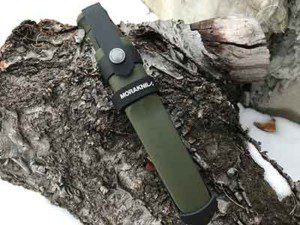 The Multi-mount version has an additional secondary lock that slide-clicks on to the outside of the sheath. Plus a leather strap that holds the knife in the sheath with a heavy-duty snap. Both versions of the Kansbol include a leather belt loop that snaps on to the outside of the sheath with the same kind of plastic ring as the secondary lock. The only thing I can think to complain about with this knife is that there is not a single ring with both the belt loop and the secondary lock on it, because you can’t really use both on the sheath simultaneously. Maybe that’s something they can work on.

Mora and me (a little history)

I was first exposed to Mora knives in the early summer of 2009, on a trip through Scandinavia that had already passed through the islands and rolling hills of Denmark and the crags and fjords of Norway. On a tourism day that took us to the 1000-year old copper mine in Falun and the historic Ornässtugan loft building in Borlänge, we stopped at Grannas A. Olssons Hemslöjd in Nusnäs. This is the oldest existing Dala horse manufacturer, which lies just 14km (8.7miles) down along the north shore of the great lake Siljan from the knife factory in Mora.

These little painted wooden horses, like the Mora knives often used to carve them, are a living artifact of Swedish history and culture. Both have been manufactured locally in the region for over 100 years. And both are based on much more ancient local traditions. I purchased a few horses to distribute among family at the gift shop. But the real gems I got were across the street in the wood shop. Here they sold tools of the trade, I assume mostly for the locals who carve and paint the horses. There I purchased two red-painted birch handled Mora of Sweden knives with laminated steel blades.  One was for my dad and one for myself. I was immediately impressed by the quality and the affordability, as well as the traditional aesthetic of these carving/utility knives. It is one of my favorite souvenirs, and one of my favorite knives. Its got durability and style, as well as an uncanny ability to take and hold a near-razor edge. 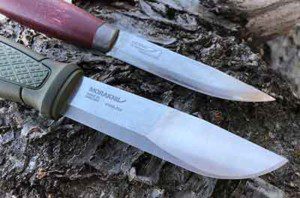 Morakniv Kansbol with a vintage Mora

At the risk of making generalizations, the Swedes (and Scandinavians in general) are obsessed with this idea of balancing form, function, and value. It’s probably why the Nordic countries’ primary exports are finished goods, be they furniture, cars, audio equipment, toys, or telecom. Morakniv also applies this concept of balance to their manufacturing process. Mixing modern automation with traditional handcraft works to keep costs down and quality high while keeping everything in-house.

I’d been anxious for some time to try Mora’s stainless or carbon steel knives. I wasn’t keen on most of their other outdoor knives, with their plastic, angled one-way handles. When I saw the Kansbol, though, my interest was piqued.

So how did it do?

For testing, I put this knife through its paces in a few traditional ways, as well as some unorthodox methods for an outdoor knife. The first test was a matter of circumstance. I was installing a bathroom fan, and couldn’t find my drywall saw. I wasn’t making a lot of headway with the utility knife. Then I remembered that the knife still sitting in its box had a cool profile grind that makes the tip nice and thin. Turns out the Kansbol does a pretty decent job of poking neat, clean holes in drywall. And an equally good job slicing edges off. After a good cleaning, I was still able to cleave cherry tomatoes without even honing it.

I also tried making a feather stick, which went fine. Then I did some basic whittling of some apple and cherry branches that I had laying around. The combination of the size, lightness, grip, and sharpness of the Kansbol provided an amazing amount of control which takes a little getting used to, honestly. This knife can be readily used both for broader tasks like cutting rope and prepping kindling, as well as for fine woodcarving and precision food prep. Perhaps the most impressive test I used, though, was slicing open those annoying plastic blister packs. The blade slid through like it was cutting through the air. Unlike many knives that will easily lose control and cut dangerously wild.

I’ve also used it for opening packages and breaking down cardboard boxes for the last 3 weeks or so (I have 2 kids still in diapers, so we go through a lot of boxes). And I haven’t yet needed to do more than a light honing to bring the edge back to paper-slicing effectiveness.

Overall, the Kansbol is a high quality, exceptionally durable and capable knife, especially for its surprisingly low price. Again, it doesn’t quite fill the role of a serious bushcraft knife, but it’ll do the job in a pinch. As light and useful as it is, I almost want to use it as my daily carry knife instead of a folding knife in my pocket, but I’m not sure if I’m ready for the stares I’d get.

MSRP is $39.99 for the basic knife & sheath, or $59.99 with the Multi-mount system. The Morakniv Kansbol is available through their official U.S. distributor, Industrial Revolution. Please note that they generously supplied the knife for this review.

← White River Knife’s Unique Survival Sheath
Since 2007, and still without a logo →