Last month, I shared an article about the TandemKoss modifications I made to my wife’s pistol. It’s a Ruger Mark IV 22/45 Lite, with the purple barrel. The process had a few ups and downs from the beginning. First, I wasn’t sure if she’d like it or not. It’s not that she wasn’t enthusiastic about the black one I had already bought, I just think she felt it was really for me. But this one was clearly bought just for her, and she knew that. Her first words were “I’d shoot that”. So that’s a win. Once I started customizing it, there were some concerns about whether she would like it more, or if I missed the mark (no pun intended) with the direction I took. And here’s how that went, broken down by each change I made.

She likes the red, but not the sharp edge. Where this wasn’t a concern for me, it was for her. I have large hands, and when my finger is flat on the trigger, it’s fine. My wife has tiny hands. It’s not so easy for her to reach the trigger. She can, but it’s not ideal, as her finger needs to be a bit straighter, whereas mine is bent. A little polishing of the edge of the trigger may be in order. As far as the takeup, break, and overtravel, it’s great. We’ll put this one in the “win” column, as we both agree it’s an improvement over the factory trigger. 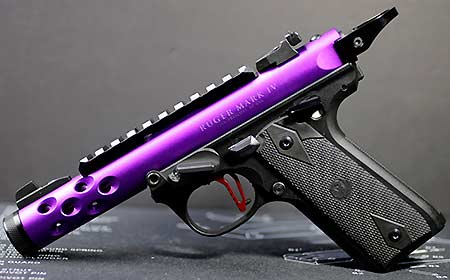 Of the two parts that make up this combo, she definitely likes the Cornerstone Safety Thumb Ledge more. It feels natural, and she likes that it makes the safety easier to manipulate. At the same time, there’s no worry of accidentally engaging the safety when your thumb is on top of it. Shooting with a big honkin’ gas pedal is new to her, so the Striplin Custom Guns Thumb Rest may take some getting used to.

I like the combo, but oddly enough, I’ve noticed it exaggerates a minor issue I have with the 22/45 grip frame. It doesn’t point naturally for me. There is something about the shape of the grip that makes it point slightly left when I first pick it up. And it’s more noticeable when actively using the Cornerstone Safety Thumb Ledge. If this was a defensive firearm, that would be a dealbreaker. Otherwise, it’s just something I need to be aware of. Because even if I’m just competing with friends, it’s still competing. Another win, which will become more natural over time.

We both agree that the texture and traction of this grip is great. But it’s just too much for her little hands. When comparing it to the stock grips, she has a clear preference for the factory version. Of course, it fits me perfectly. We’re not calling this one a tie though. There’s nothing wrong with the grip, and I get to use it on one of my other pistols, so definitely a win. As a side note, I’m toying with the idea of just using some traction tape for her, like Tractiongrips.

Easily one of the biggest surprises to me. When I first saw photos of the halo, I thought “I don’t want that hanging off my pistol”. Now I want one on each pistol. As mentioned in the original article, my wife has had some hand and wrist surgeries. So the pinching action of pulling back the bolt is not comfortable. I can relate, and I’ve gotten pinched enough times that I quickly saw the value in it. Using one finger to rack the bolt is easy enough that even a child can do it. I know, because we had some kids at the range try it. It looks good. More importantly, it works. Another win. 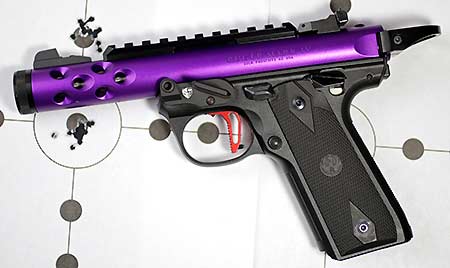 My wife really loves her new pistol, and even more so after a few modifications. We don’t have any before and after comparisons, because she didn’t get a chance to shoot it before we changed it up. But the functionality has been improved a great deal. We’re going to stick with the narrow grips for a slimmer profile. This makes it ideal for shooters with small hands. Other than that, everything else is staying the way it is. Next step is to upgrade the sights, or add an optic. We haven’t decided which yet. As always, if you have any questions or comments, feel free to share them below.

We’d like to extend a sincere thank you to TandemKross for providing some of the parts that made her good pistol great.