The Lumina Dual 1800 from NiteRider is a powerful LED headlight. How powerful? Daylight Visible Flash powerful. That’s right, this light isn’t just for nighttime trail or low light use. With it, you’ll be seen during the day. While it may be the hot ticket for MTB riding at night, it’s also at home on the bars of a commuter bike.

LED emitter and battery technology have been advancing at a pretty solid pace. About four years ago, I reviewed a similar light with an output of only 800 lumens. At the same price point, the Lumina Dual 1800 is putting out more than twice the light. Yes, it does this with two LEDs, but the runtimes remain almost equal. So it’s gotten quite a bit more efficient. 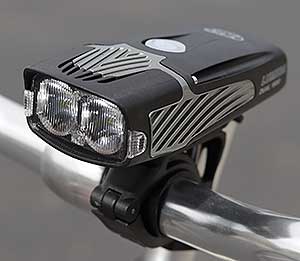 Here’s a breakdown of the output options:

For continuous light, you’ll get six hours at 350 lumens, three hours at 700, and ninety minutes at 1500. With a Boost (beast?) Mode that kicks it up to 1800 lumens, you’ll still get forty-five minutes. Then there are a couple of flash modes that provide ten or seventeen hours, and a walking mode good for twenty hours at 100 lumens. All modes are controlled through a single top-mounted button. Note that all run times are approximate, as battery state and ambient temperatures can cause them to vary.

What can you do with all that light?

Power is nothing if you can’t use it, right? Well, NiteRider didn’t just stuff in some bright LEDs and call it good. Instead, they used a reflector that gives you a focused center spot, with just the right amount of spill for your peripheral vision. That can equate to less drama in turns. For safety, the reflector wraps around the front edges, to offer some extra visibility from the sides too. Whether it’s a car or a tree, a dog or a deer, you’ll have fewer surprises. And even less when going straight at speed. I’ve only used the Lumina Dual 1800 on a commuter bike, but even with steep hills, I haven’t been able to outrun this light. When the weather cools off, I’ll test it on some trails. But with 1,000 lumens more than my current light, I know it’s going to turn night into day. 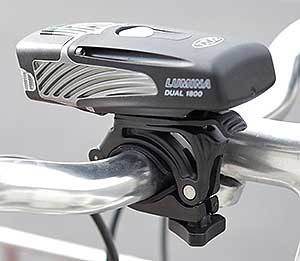 First, the styling is pretty sleek, and less industrial than some lights. Cooling fins are both functional and provide visual appeal. And the clamp is cool. It’s a simple oval with a rubber gripper insert. A decent thumbwheel makes it easy to tighten it, even with gloves. It locks down solid, and the light itself slides on and off with ease. But it stays in place when it’s on. That makes it commuter and MTB-friendly, regardless of bar size (up to 35mm). The bottom charging port and top button are both sealed, giving it an IP64 rating (it fears no rain, but cannot swim). Speaking of the top button, I love the simplicity of it. That one button allows you to cycle through all the modes, turn it on and off, lock it, or enable the boost. Simple = reliable. Usually.

But it’s not all rainbows and unicorns, is it?

With great power comes… small compromises? Put simply, you can’t get this output and runtime with a USB charger. Well, not with a three hour charge time. To that end, NiteRider includes an AC charger, which is a small price to pay. Also, that light is heat, which can be dangerous in your backpack, duffel, or other bag. So there is a lock mode, which prevents it from being turned on accidentally. And the light plus mount weighs 258 grams. Yes, that’s a bit over a half-pound. Again, that’s basically for a portable sun, so really, don’t complain.

Once mounted, I took the Lumina Dual 1800 for a spin. It goes without saying that you should take the time to adjust the angle when on the street. The last thing you want to do is shine it into anyone’s eyes. Once I got the angle right, I took off for a quick loop on a local bike path. Doing so takes me through neighborhoods, under tree cover, and even through a tunnel. At the lower settings, there is more than enough output. Honestly, I think I caught a few other cyclists by surprise. They were probably expecting to be passed by a very quiet motorcycle. If you’re more about speed, the higher settings will not disappoint. Again, the beam pattern really reflects NiteRider’s experience with lights. Since my evening rides are only about 30-60 minutes, I could go days between charges, by varying the output during use.

I found it nearly impossible to shoot decent video of the Daylight Visible Flash mode from a car, with the bike moving. Well, at least not safely. So the video below is static. But you get the idea. First half is the continuous/flash, the second half is just flashing. This was shot between 5 and 6 PM (commuter ride home time) on a sunny evening with high clouds.

So who is it for?

With the massive output, this is just the ticket for MTB riders. But the long runtimes should also appeal to commuters. Or vice-versa. In other words, anyone looking for plenty of lumens and/or runtime will not be disappointed. NiteRider makes quality lights that last, and this one should be no exception. MSRP is $159.99, or click here for a better price on Amazon.

A special thanks to NiteRider for sending their Lumina Dual 1800 for this review. And check out the Sentry Aero 260 taillight review (coming 7/24), which complements this light perfectly.