The second article in this series sees me getting in the “wayback machine”. Ten years ago, my wife’s brother and I bought matching bolt action Savage MK II FV-SR .22 rimfire rifles. They even have consecutive serial numbers. But his is factory stock, save for an inexpensive scope. Mine’s had a few modifications since I bought it. They include a Boyd’s “Tacticool” stock, Vortex Crossfire II 4-16×44 scope, and a bipod. Trigger smoothing and bolt polishing was done the old school way – by shooting brick after brick of ammo. 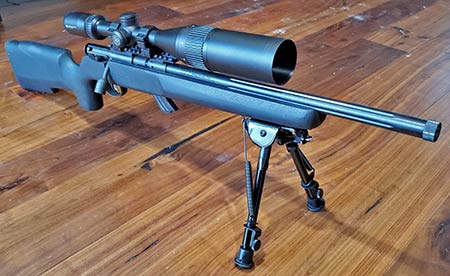 I’ve retained the original 16.5″ carbon steel button rifled, fluted and threaded barrel. It matches the matte blue carbon steel receiver. This is topped with a factory scope base. A narrow slot under the receiver accepts a 5 round box magazine. Of course, I have since acquired some ten round magazines as well. Overall length with the flimsy synthetic stock was 35.25 inches. Weight was a mere 5.5 pounds. Length of pull was a short (for me) 13.9 inches. Oh, and it had the AccuTrigger, which was one of the reasons I bought it. MSRP today is $275, but I recall paying under $200 back in the day.

First thing to be added was a cheap $40 scope. I don’t recall the brand, but it was only used until my BSA Sweet 22 scope arrived. That was the 3-9×40, if I remember correctly. Not a great scope, but at the time it did the job. Along the way, I also scrounged up a Harris bipod knock-off. Not sure where it came from, but it’s been on there for ten years and hasn’t let me down.

In December of 2012, I upgraded to the Boyd’s “Tacticool” stock. This laminate stock has a black textured finish, and only cost $92 back then. With a new trigger guard and floor plate plus shipping, I was another $128 into my rifle. But it was worth it. The stock was designed to mimic centerfire bolt action rifles. So it was something like a trainer, back when a brick of ammo was well under $20. And it stayed in this configuration up until a few years ago.

As I swapped scopes across different rifles, I ended up with a spare Vortex. This Crossfire II had greater magnification (4-16) along with a brighter objective (44mm). So on to the MK II FV-SR it went. 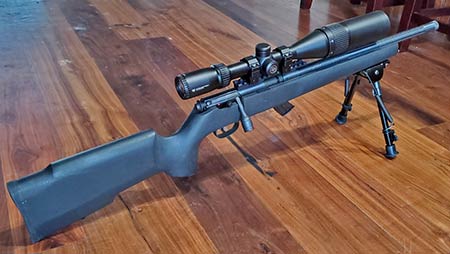 With few exceptions, most owners of the older versions of this rifle found them to be quite accurate. Mine certainly is good enough, in the context of what it was used for. We’d head to the indoor range with a carton of bulk ammo, and sheet of little orange stickers. After pasting a handful of those dime-sized stickers to a target, we’d run them back to the end of the 25 yard range. Sure, five-shot groups measuring around 1/4″ at 25 yards isn’t really that impressive. But it was cheap fun at the time.

Outdoors, hollow points blew up crabapples at 40-50 yards. And our 2″ steel spinners took a beating. Ringing a little 2″ steel spinner at 50 yards may not be a big deal for a lot of shooters. Yet it brought a smile to the face of every new shooter who’s tried it with this rifle. I’ve never taken the time to see if this rifle has a preference for a certain ammo, it just eats everything, and rarely disappoints. Maybe I just have low expectations.

For a sub-$200 rifle, the MK II FV-SR has not disappointed. Even though I’ve probably got around $500 into it now, it’s still one of my least expensive .22s. As a bolt action, it’s never had a feeding or ejecting issue. Goes bang every time, which might even be surprising for rimfire. Whenever I see a lightly used one for $200, I have to remind myself that I don’t need another. But I might grab one up as a project rifle anyway. It’s just been a great little rifle to own. And Savage customer service was great when I realized I was missing a trigger guard screw. They sent one out at no charge.

As my first bolt action rimfire, I’ve always really liked this rifle. It’s been fun to shoot, and great for training new shooters. There’s some decent aftermarket support for it too. I can’t speak for the latest production, but if you get a chance to pick up a used one at a fair price, it’s worth your consideration. Despite the fact that I recently got a precision bolt action rimfire in chassis last year, I still won’t part with this one. If you’re interested in reading more, check out the official Savage website.

Comments? Questions? Do any of our readers have the Savage MK II FV-SR, or one of the many similar models? Feel free to share below.

← My First Suppressor – a Tale of Money and Waiting. Lots of Waiting.
Olight Baton 3 Premium Edition →