One of the best parts of growing up is being able to afford things that were out of reach when I was younger. My S&W Model 617 is one of those things. At 21, I owned a single inexpensive stainless revolver. I’m a few years older now, and have a small collection of stainless S&W revolvers, the first of which is my Model 617. The sale price of $659 was a fair bit lower than the $853 MSRP, but still not inexpensive for a .22 handgun. Certainly not an expense I could justify back when I was newer to the workforce, and had limited income.

Well, not quite. But Smith & Wesson started producing the original K-frame back in 1899, for their .38 S&W Special ammo. And this frame size is still available today, in .38 S&W Special, .357 Magnum, and of course, .22LR. So it’s a stout revolver frame, with a teeny little bore. And instead of five or six shots, it holds ten rounds. It’s big, it’s beautiful, and it’s totally overbuilt for rimfire. Though I probably won’t be around to teach them to shoot it, I expect that my son’s grandkids will enjoy it.

The frame, cylinder, and 6″ barrel are all stainless steel with a satin finish. That contributes to the 44.1 ounce overall weight of this 11.1″ long revolver. To put that into perspective, the little model 642 in .38 I used to carry weighs just a hair over 14 ounces. The action is single or double, making it a fine choice for some serious plinking. It should surprise no one who knows me that one of the first things I did was replace the synthetic grips with a set of Hogue’s. There is really nothing wrong with the factory grips, I just like Hogue a little better.

It comes with a Patridge front sight, adjustable rear sight, both in a nice matte black, as they should be. In addition to the full underlug, the barrel gets some extra attention on top. For most of the generous 7-1/8″ sight radius, there are grooves cut running parallel to the barrel. These continue in the rear sight as well. Overall, this makes the sight picture glare-free.

With a ten-round swing out cylinder instead of a loading gate, ammo goes quickly. Shooting double action isn’t too bad for closer targets, or big steel ones. If more precision is required, thumb the hammer back, and the pull is light enough to help with accuracy. At the same time, the weight is nearly perfect. Not so heavy that it takes two hands, yet not so light that it’s hard to hold steady. The Model 617 is easy to keep on target as you fire off ten shots without fatigue. Then just swing out the cylinder, eject the empties, and repeat as necessary.

In the four years or so that I have owned this particular revolver, I have taken it on uncountable outings. And never once have I shot a measured group. It’s punched thousands of holes in paper and empty soda and soup cans. But I have never measured a single group. Although I’ve read that some folks have competed with the Model 617, I don’t think of it as a competition firearm. This is my plinker, it’s made for fun. Cans out at 25 yards aren’t all that difficult, with some practice. At closer distances, it’s fun to make them dance, even shooting double action. 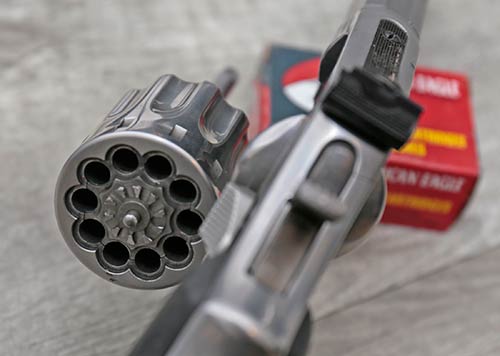 Not all revolvers are “six shooters”. This Smith & Wesson Model 617 holds ten rounds of .22LR

In case it’s not obvious by now, this revolver fills a niche or two very well. For anyone wanting to practice shooting their .38/.357 with slightly less expensive ammo, it’s not a bad choice. It has neither the noise nor recoil of .38s out of my 686+, but the weight and trigger are pretty dang close. Maybe not the ideal trainer, but certainly an option, once you get past the initial cost.

When it comes to introducing new shooters to the sport, the Model 617 really shines. The lack of noise and recoil means it won’t scare anyone. I’m certain that some people are just intimidated by a semi-auto as well. Loading rounds into a magazine, sliding it into the magwell properly, racking the slide, and manipulating a safety can all be a bit much for a first-timer. A single action/double action revolver with a swing-out cylinder requires a lot less explanation. Just about everyone understands how a revolver works. And it’s usually a lot more fun when it’s less complicated.

As far as I’m concerned, the only thing keeping the Model 617 from being the ideal choice for a first handgun is the price. At the same time, it actually makes more sense than its much less expensive “competition”. It’s made in the America, and backed by a lifetime service policy. Overall construction is far better – it’s durable enough to be handed down through generations. Should you want to improve the trigger, any competent gunsmith can handle that. Being a K-frame, there are plenty of grip options too. Even the sights can be upgraded, although I see no need to.

The only downside I can think of is cleaning. While not a big deal, there are ten holes in the cylinder, which takes a little extra time. But I find gun cleaning relaxing – time well spent. And being stainless, I can polish as much (or as little) as I want, with no fear of ruining the finish. Can’t say the same for blued firearms. Overall, it’s a sharp looking revolver that shoots well. Plus, they hold their value. Not that anyone would want to part with one. I know I wouldn’t. Check it out at Smith-Wesson.com.

Comments? Questions? Have any of our readers owned or shot the S&W Model 617? Feel free to share below.

← New Magazine Base Pads for the Ruger® MK IV™ from Volquartsen
Rimfire Madness- Let’s Stick Together, Not Stick it to Each Other →