(COLORADO SPRINGS, Colorado) — In observance of its 20th Anniversary in 2017, Henry Repeating Arms created a superb, highly collectible “One of Twenty” Edition of its highly popular Big Boy .44 magnum lever action rifle.  You can help support America’s Shooting by bidding on this rifle, with custom serial number 20HENRY17, through February 18 only on Gunbroker.com 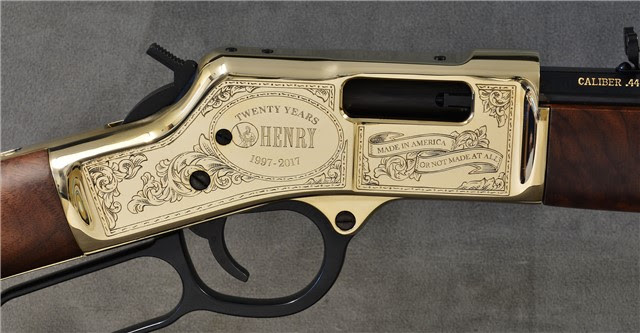 Each of the “One of Twenty” Big Boys has been donated by Henry to an organization working in support of America’s hunting and shooting sports heritage. Each will be auctioned to provide important funding in support of hunting, shooting and conservation in America.

USA Shooting (USAS) is a leader in Olympic Sports with the mission to prepare athletes to win Olympic and Paralympic medals, promote the shooting sports through grassroots initiatives and partnerships, and to govern the conduct of international shooting in the United States.  USA Shooting has a proud history as one of the most decorated Olympic sports in the United States.

USA Shooting represents the best of American sportsmen and women and they carry on the proud tradition of medal-winning success and shooting skill unlike any other country in the world, exemplifying the greatest defense possible for protecting, preserving and promoting the shooting sports legacy of this country.

This handsome serial number 20HENRY17 is fully hand engraved just like the hand-engraved 20HENRY01 which recently auctioned on GunBroker.com for $25,225.00

The engraving on this rifle is by the internationally-known and award-winning Baron Engraving of Trumbull, Connecticut. Baron has provided custom engraving services for most of America’s major firearm manufacturers and hunting and conservation organizations including the Ducks Unlimited, the National Wild Turkey Federation, the Rocky Mountain Elk Foundation, National Rifle Association, U.S. Military Academy at West Point and many others. Baron also just designed and engraved more than 25 one-of-a-kind firearms for the official SHOT Show Auction.

“Over the past two decades, I’ve come to realize that it’s our customers that make Henry the brand it is today,” said Anthony Imperato, President and owner of Henry Repeating Arms. “Henry is a brand that represents many different things for customers from all walks of life. It’s their stories, their passion for Henry and shooting sports that continue to push us to be the best possible firearms manufacturer we can be.”

Supporting the shooting sports has always been at the core of Henry Repeating Arms’ DNA, so Imperato felt it would be fitting to continue that tradition as the company marks its 20th anniversary. Henry has partnered with the Hunting Heritage Trust to auction the “One of Twenty” Anniversary Edition Big Boy .44 Magnum rifles with 100% of the proceeds going to non-profit organizations working to support hunting, shooting and wildlife conservation in America.

“The incredible, positive impact that these organizations have had on the shooting sports industry is immeasurable and we’re proud to have the opportunity to help fund their work for years to come,” added Imperato. “Collectors and Henry enthusiasts alike will be drawn to the intricate, hand-engraved details these rifles will feature, along with their extraordinary AAA grade American Walnut and special “One of Twenty” Edition serial numbers.”

“Anthony Imperato, Henry Repeating Arms and Hunting Heritage Trust continue to demonstrate their support and believe in America’s Shooting Team and we can’t thank them enough for allowing us to be a part of this anniversary celebration,” said Kevin Neuendorf, Director of Marketing Communications for USA Shooting.  “We congratulate Henry Repeating Arms for 20 years of exceptional service and quality as well as their dedication to American values and pride.”

All rifles in the “One of Twenty” Edition come with the custom Henry Walnut Wall Display as shown in the listing photographs plus a custom-fitted hard case with handsome blue lining.

The High Bidder for each “One of Twenty” rifle receives a signed “Certificate of Authenticity” from Henry Repeating Arms President Anthony Imperato certifying that the rifle was one of only 20 produced in recognition of the company’s 20Th Anniversary was auctioned to raise funds in support of America’s hunting and shooting sports heritage and highlighting the organization that benefited from the auction.

Henry collectors estimate that the “One of Twenty” edition will raise in excess of $100,000.00 for programs in support of America’s hunting and shooting sports heritage.