While not a “traditional” outdoor knife, the Opinel N⁰08 Outdoor Knife is a quirky quality tool.

Opinel then and now

Joseph Opinel invented the now famous Opinel folding knife in 1890 in Savoie, France. And they’ve been making essentially the same knife ever since. They offer it in more sizes, and in more materials, but the knife design is pretty much unchanged. Opinel has had a lot of exposure recently on various article sites. Usually under headings like, “20 things on Amazon that you’ll only have to buy once” or “15 items for dad that he’ll love”, etc. And they’re not wrong. Opinel makes a quality product at a pretty reasonable price, even if it’s a little quirky.

This is a decidedly French company and a decidedly French product. It’s a bit of a metaphor for French culture in that it fiercely maintains tradition with a “You don’t like it? Oh well, we’ll keep doing it this way” sort of attitude. 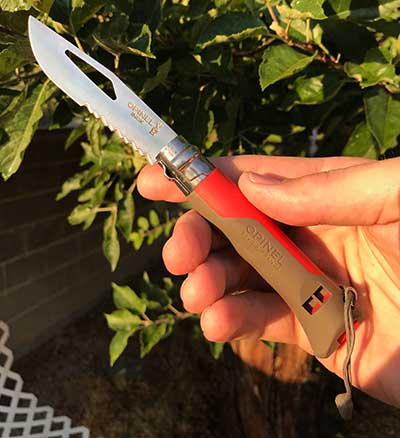 Which brings us to the locking ring. This definitely feels like a late 19th century solution, even if it was introduced in 1955. It’s just a shaped strip of metal bent around the neck of the handle with a small gap. When it is turned away from the handle cutout it locks the blade in place, either closed or opened. Certainly sturdier than a slip joint, clasp lock, or lever lock. It’s a lot simpler design than these or frame locks or lockbacks. It’s also a bit more cumbersome, and in a brand new knife, it takes a bit of force and learning to engage and disengage it one-handed. But that’s okay, because this is an Opinel. This is not a knife for flicking open off of a belt clip with a spring release. 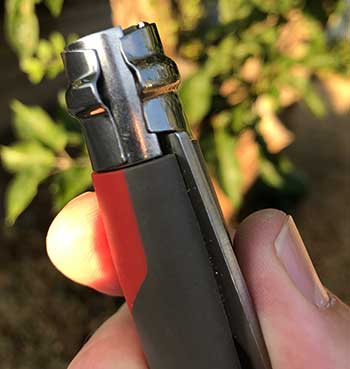 The Opinel Outdoor Knife only comes in the No. 8 size (8.5cm/3.35in blade). This was a little small for me, but still useable. Their traditional pocket knives range in size from 1.38in to 4.72in. The blade is Sandvik 12C27 modified stainless steel which is a great balanced alloy. It’s strong, holds a good edge, and doesn’t require special maintenance. The blade is thick enough to be sturdy, but not heavy. It wasn’t super sharp when I got the knife, but it took a pretty fine edge.  Even after a fair bit of general use, and a little abuse, it kept it well.

The outdoor model differs from their traditional pocket knife line by sporting a fiberglass-reinforced polyamide handle. It’s also got a built-in whistle and tether. Additional features include a shackle wrench cut into the blade, and a rope cutting serration in the lower blade edge. These seemed to be oddly specific features at first glance, and it really threw me off for a while. I happened to have a small shackle at home, and found the in-blade wrench to work just fine for that task. Certainly better than having to take an adjustable end wrench with you.

I didn’t have any proper climbing rope handy around the house, but the rope cutting serration was smooth enough to rip freely through some old hemp rope I did have laying around in the garage. I’d say this is actually a great feature that makes the knife quite useful, even if it does take up a fair bit of real estate on the blade.

This is certainly not a “bush knife”, and by American standards, it’s not really much of an outdoor or camping knife. It is quality designed and manufactured, if a bit quirky. But it’s about as useful for camping as any other moderately sized folding knife. Still, I kept getting hung up on it being called specifically an “outdoor” knife.

Then I recalled a conversation that I had with a friend in Denmark about the differences between how Americans and Europeans do “wilderness activity”. He told me that the idea of hiking up into the mountains and setting up a tent by a lake, etc. was a bit of a foreign idea to a European. By and large, they go out into nature more casually.

This is, I suppose, partially because they don’t necessarily have a lot of “distant” wilderness to go to.  And because what wilderness they have is very close to civilization. So you go for a hike through green space in or near town after work or on the weekend. Or you holiday in the Alps and do mountainous activities. Or you take a small sailboat out on the fjord for a few hours. Then you overnight at home or in a hotel or something.

There are certainly hardcores that go hunting in the woods of Sweden or go on long overland treks following Hadrian’s wall across northern England. But they’re not really doing much bushwhacking or wilderness survival. So the more I thought about it, the more I embraced the idea that this knife was decidedly French. And learning more about the company and where they came from, I realized this is a little bit different idea of an outdoor knife than what we’re used to in the U.S. In a way, it’s a bit of an allegory for differences between French and American culture. It’s particular, and a little bit different than what we’re used to, but that’s not a bad thing.

The Opinel N⁰08 Outdoor Knife is available on their website for $39. It comes in 4 colors, Blue, Orange, Earth-Green, and Earth-Red.

Merci beaucoup to Opinel for providing the N⁰08 Outdoor Knife for me to review.