My first Ruger MKIV currently sports a matte black Pac-Lite IV 6″ fluted barrel from Tactical Solutions. But that’s not how it left the factory. In my quest to get the least expensive base firearm, I started with the 5.5″ bull barrel. It shot very well, and I was quite happy with it. Until I handled one of the Lite models. So I bought a Lite (all black) and tried to convince my wife it was for her. That didn’t work, so I bought a purple Lite, which she loves. At that point, my wife and daughter each had a Lite to shoot, leaving me with my heavy barrel model. And as much as I liked it, I really wanted a lighter barrel. Not wanting to compromise, I went all-in, and bought the Pac-Lite.

Despite being a half inch longer than the barrel it replaced, the Pac-Lite is much lighter. Machined from 6061-T6 aluminum, it weighs a mere 9.4 ounces. That’s just under half the weight of the 18.9 ounce factory Ruger barrel. Losing that much weight from the front of a pistol is a dramatic change. Even with a reflex sight mounted, that would still be about a half pound lighter. I’m sure the flutes help a little there, but I got them for the looks too. Anyway, this 1″ diameter barrel is threaded 1/2 x 28, perfect for the suppressor I have on order. Inside is a chromoly steel bore with a 1:16 twist, and a target crown. Although it’s drilled and tapped for a rail, I haven’t gotten around to ordering one.

Well, it’s the Mark IV 22/45, so installation requires almost no skill. Once I verified that my pistol was unloaded, I cocked it, put it on safe, and pressed the button at the back of the grip module. After tipping off the old barrel, I swapped the bolt into the new barrel, pointed it down, latched it and locked it in place. Done.

Once I finished checking to make sure it cycled, I impatiently waited for my next chance to go shooting. I ended up breaking it in at the indoor range. Twenty rounds, a bore snake, and twenty more, through the first hundred rounds. Everything cycled fine, and I was reminded that I’m not much of a paper-puncher. Outdoors, I used the same steel spinners that I used with the factory barrel. They are 2″ and usually placed around 25 yards for handgun shooting. Hitting them was easy enough, but there was room for improvement. 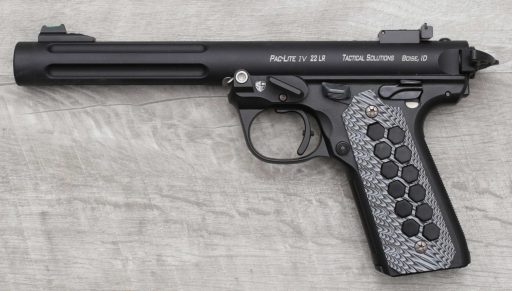 This pistol has a very nice Volquartsen trigger upgrade. Between that and the new barrel, I had higher expectations for it. The addition of a fiber optic front sight raised my hit rate to “almost every time”. That’s not the say the front sight was bad. My eyes are 50 years old. I’m certain that in more capable hands, someone could get some tight groups on paper out of this barrel. But it allows me to ring steel all afternoon, without the the extra weight of that factory barrel. And that’s all I was after. I’d already read plenty of reviews of the barrel myself, and it’s gotten enough praise for accuracy. After well over 500 rounds, I have yet to have any cycling issues with any ammo, but I avoid the cheapest stuff.

I have three different Mark IV pistols to choose from now. All are light weight, with two of them being factory Lite models. But this one with the Pac-Lite barrel is my favorite. Sure, the trigger helps. And it looks the best, in my opinion. If I had to choose just one, I’d keep this one. If I ever get to compete in some sort of Steel Challenge, I’ll add a rail and a reflex sight. For now, it’s just fun to shoot with friends.

A note on purchasing the Pac-Lite IV

If I have one complaint, it’s that Ruger made the barrel the serialized part of the Mark IV 22/45. That’s not a big deal, until you want to replace the barrel. My Ruger model 40107 has a suggested retail price of $409. Actual price paid for one shipped to my FFL was $317. Not bad at all. MSRP on the Pac-Lite IV is $355, and actual selling price is probably closer to around $270. Plus shipping (unless you find one locally) and a transfer fee. Because it has to be transferred via FFL on a form 4473. Just like an actual firearm. Ouch. So be prepared to just about double your investment in your pistol. 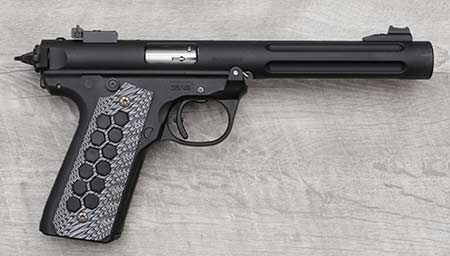 Worth it? Yes. There’s nothing I don’t like about the Lite models, but this certainly looks better. It’s just that if the barrel wasn’t the serialized part, they would probably cost a lot less. There would be less paperwork for the manufacturer, retailers, and end users. Would less paperwork to comply with the government lower the cost of production?  Would that lead to lower retail prices, and more in circulation? Economies of scale, or something like that? Maybe. The barrel is awesome, but I did pay for shipping twice, and two transfers. To build a .22 pistol. If you have a steel barrel, it’s a viable option. If you have a Lite, then it’s a much tougher call.

Comments? Questions? Have any of our readers tried out the Pac-Lite IV Pistol Barrel? Feel free to share below.