Building on the success of their original design, Pocket Shot has released the Pocket Shot Junior. Instead of firing steel shot or marbles, the Pocket Shot Junior has its own ammo. These small rubber balls are more appropriate than heavy ammo for the backyard or campsite. And they are just the ticket for introducing your kids to slingshot fun and safety.

First, a brief introduction is in order. Pocket Shot slingshots use a latex pouch and plastic ring to launch a projectile. This makes them much more compact than the typical “Y” frame with elastic bands. With a velocity of 300-350 fps, they are not toys. While still not a toy, the Pocket Shot Junior is less likely to break a window or cause serious injury. I can shoot it in my yard, and a stray shot won’t upset my neighbors. 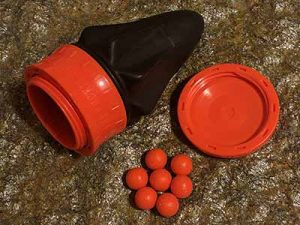 For $12, the Pocket Shot Junior comes with about 25 orange rubber balls. They are the only recommended ammo for it*, and the color makes them easy to locate in dirt or grass. I also like the fact that they don’t ricochet too much. Using my fence as a backstop, I set up a few empty soda cans, and took aim from ten feet or so. With a little practice, I could knock over the cans fairly regularly. And the balls would dent them, but not punch through. If you have giant dandelions in your yard, you’ll have even more fun. A direct hit to them makes an impressive explosion of seeds. This may upset your neighbors.

*Here it is in action, courtesy of Pocket Shot. Note that they do try some alternate ammo. But these users are trained professionals.

Pocket Shot states that none of their products should be used by anyone under 16 without supervision. And they also recommend eye protection. I’m going to agree on both counts, although the Pocket Shot Junior should be okay for responsible teens. Unlike a BB or pellet gun, it won’t result in dead birds or broken windows. And it’s not classified as a firearm, so it’s probably legal to use in your yard or at most campsites. I do suggest checking local laws first, just in case.

Today, kids get suspended from school for nibbling a pastry into the shape of a gun. So rather than teaching kids that firearms are mostly sporting goods, they are taught to view them as weapons. This is unfortunate, as it promotes an unfounded fear of inanimate objects. But we can turn that tide by introducing our kids to shooting sports at an early age. Familiarity can lead to safe, responsible use, rather than fear. And rubber balls out of a latex pouch is as good a place as any to start.

You can get your own Pocket Shot Junior for $12. When you wear out the pouch (which you will, because it’s fun), you can order replacements. For a 3-pack, it’s only $6.50. That’s inexpensive backyard fun. Check out the Junior, along with the rest of the product line, at thepocketshot.com.

I’d like to thank Pocket Shot for sending us their Junior for this review. It’s been a fun little slingshot, and I think I might just get the Pocket Shot next spring.