For many recreational firearms enthusiasts, Ruger’s 10/22 was their first rifle. They’re relatively inexpensive (my first one was $99, new), reliable, and pretty accurate out of the box. Of course, with 7 million sold, it’s not surprising that they are one of the most modified firearms as well. Although you could get a nice checkered walnut stock to go with your stainless heavy barrel, that’s not so common. What is common is laminate stocks, aluminum chassis’, and either heavy steel or aluminum sleeved bull barrels. From the factory, the 10/22 action has some shortcomings though. So it’s possible to buy an aftermarket receiver, or stuff your own with hundreds of dollars of “upgrades”. While I’m as guilty as anybody else of spending beyond my ability to shoot, I’m going to try something new with this build.

Having owned close to a dozen 10/22 variants, I know what I can expect as far as accuracy. But I don’t want another heavy laminate thumbhole stock, and heavy .920 steel barrel. I’ve already got a “one hole, all day long” rimfire. This time, we’re looking for the lightest weight, without going overboard on price. That means choosing each part wisely. And it might mean doing some work myself. In the end, it should be reproducible by you, the reader, if desired. So I will list the MSRP and/or actual price paid for each part. When I’m done (I know, a 10/22 is never really done), we’ll see what the total cost is. And if it’s worth if for the level of performance. Keep in mind that weight, not just accuracy, is one of the performance indicators for this build. 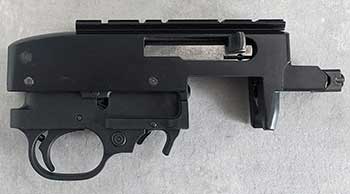 Where I live, the least expensive new 10/22 is right at $200. Oddly enough, used ones are rarely much less. When buying used, there are a couple of things to consider. Older rifles are considered “better” by some, due to the receiver finish and metal trigger guard. I won’t get into that debate. Keep in mind that the switch from metal to plastic came about around 2008. So if you’re buying one with a metal trigger guard, it’s more than ten years old. For this build, I wanted to save the two ounces or so, and go with a newer model. As luck would have it, a friend offered his with only 200 rounds through it for $180. After selling the stock and barrel for $60, I’m sitting at $120 for my receiver.

The stock and barrel

Right now, I’m on the fence between the Hogue Overmold and the Blackhawk Axiom. Price is close, and the difference is a few ounces. But I haven’t tried the Axiom, so I might just throw that on to start. Originally, I wanted another PMACA chassis, but the slight weight penalty also comes at about twice the price. Barrel choices are another story. For a quality lightweight barrel, prices start around $200, which is fine. Weights vary by a few ounces here as well, so the goal will be to find the best balance of price/weight. That said, spend a few minutes reading forums, and for every 3 good reviews, someone chimes in about a lemon. With every single brand. First step here will be to see what’s available locally, for two reasons. One, it’s important to support local businesses. Well, if they are good. And a couple of my local shops genuinely appreciate my business, so they take good care of me, and I spend my money there. Second, if I have a problem, it’s easier to deal locally than online. Also note that with many online retailers having to charge sales tax now, it’s starting to make more sense to shop local.

Who wouldn’t want a drop-in trigger, for $150-$200+? Or a new $120 bolt? Before I would even consider those items, I’ll do a standard polish of some of the trigger group components. That’s free. Another option is Ruger’s factory BX trigger, which can be had for $50 locally. From there, I’ll see where we are at as far as accuracy. Of course, as long as I have it all apart, there are a few things to replace, as I recommend on every 10/22, no matter the intended use. First, get the auto bolt release, because the stock Ruger one is garbage. For about $11, you can lock the bolt back as normal. And then a little tug to the rear releases it. No fumbling. I also replace the extractor, for another $10. Every aftermarket extractor seems to have a sharper edge, and is more reliable than the factory one. Finally, I do like an extended magazine release. Whether you get the one that runs along the trigger guard, or one that justs hangs down a bit, reloads are easier than with the stock one.

I’ve become partial to Vortex, for good reason. They offer quality optics, at fair prices, with the best warranty. Since I already have a few of their scopes lying around, that choice will be easy. Their Crossfire II line has plenty of options with adjustable objectives. Most focus down to 10-15 yards. Other scopes have parallax correction fixed at 100 yards, which isn’t ideal on a .22 rifle. At least, not for me. We generally shoot between 25 and 100 yards.

If anyone has any thoughts, criticism, or suggestions, please feel free to share them in the comments section. Even if they don’t directly apply to this project, I’ve got another couple of 10/22s, and a Charger Takedown. So I’m open to other ideas.