Installation and testing of the Go Gauge Light follower is the third installment of my project Shockwave. Click here to see previous articles. While many people are buying the Shockwave as a defensive weapon, for me it’s just another range toy. That’s not to say it wouldn’t serve well in a defensive role, but that’s not why I bought it. And when I went looking for a few upgrades, I found the Go Gauge. This replacement magazine follower is intended to help with reloading, but that’s not all it’s good for.

Originally designed to give a tactical edge, I saw two advantages for the recreational shooter as well. First, the Go Gauge is made from Dupont™ Delrin®. On every shotgun I own, the follower is one of the first things replaced. Upgrading the cheap metal follower to a high visibility polymer one is easy and inexpensive. This can provide smoother loading and feeding. Adding the “smart” LED light offers an even better visual indicator of an empty magazine too. Those two features will benefit shooters of all abilities and disciplines. 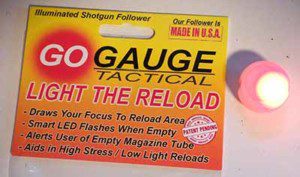 Installation took about two minutes. Clear your shotgun to make sure it’s unloaded. Check it again. Then unscrew the cap on the magazine tube, and carefully pry out the metal keeper atop the spring. I like to twist as I pry. Turn it over, and the steel follower should fall out. Drop the Go Gauge in, then the spring, and then replace the keeper. You might need to give it a few taps with a plastic screwdriver handle. Finally, thread the cap back on. Took more time to type this out than it did to actually replace the follower.

By itself, Delrin® is a great choice for a follower. Reduced friction and superior heat, impact, and chemical resistance make it ideal for this application. Although most hi-viz followers are orange or (zombie) green, the Go Gauge is white. It shows up well in the magazine tube. At a glance, you can tell it from the brass or aluminum bottom of a shell. As an added bonus, reloads are smoother and maybe even a bit quieter. 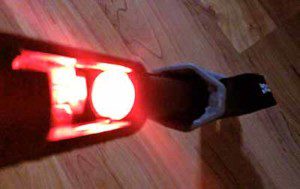 Go Gauge Light Follower, installed, and lighting up after last round ejected

Going beyond the basic polymer follower, Go Gauge added some red LED lights. When you fire your last shot, the module lights up the follower and flashes for a bit. Actually, it lights with each shot, but you won’t see it until you empty the last round. There is plenty of debate regarding the value of this from a tactical view. Most people agree that in a gunfight, you reload on the go, and never let your shotgun get empty. But most people haven’t been in an actual gunfight. Things don’t always go as planned, regardless of how much you practice. If Go Gauge provides an advantage, take it, as it won’t cost much. At their current sale prices, it’s only $6 more for the lighted version.

So, we’ll stay out of the tactical debate (although you are free to share your thoughts below). What I do like is that as I rack the slide after the last round, I can clearly see the Go Gauge lighting up the inside of the receiver. Whether you view that as a serious warning or a “game over” reminder is your call. But at my indoor range, it made it easy for me to tell when the Shockwave was empty. Not just when I’m shooting, but when I am letting a friend or another guest shoot. Standing a bit behind and to the right, I don’t have to count rounds. I can just watch the target, trigger finger, and the action.

To be clear, the Go Gauge doesn’t tell you the chamber is empty, only the magazine. But that’s still a handy feature. If you were shooting clays, I’m not sure it would be bright enough to see at mid-day, but the white follower would. And the rest of the time, whether at the range or on the job, it would alert you that your magazine is empty. Only you can decide if there’s any value in that.

Check out the Go Gauge followers, either with or without the LED module, at gogaugetactical.com. At the time of publication, the Light version was on sale for $21.95, the no light version was $15.95.

Special thanks to Go Gauge for providing their follower for this review.

*Click here to see all the articles in this series.