Despite ammo availability issues, the Ruger 22 Charger isn’t gathering any dust on dealer’s shelves. And for good reasons too. This pistol, based on the 10/22 rifle, is still inexpensive to buy and shoot. The model in this review has an MSRP of $349. Even at today’s ammo prices, it’s still affordable to spend an afternoon shooting a few hundred rounds. Plus, it’s really fun. Especially if you happen to have a suppressor available.

Rather than review yet another fully custom project gun, I set out to try a 22 Charger right out the box. So this review is based on a factory stock 22 Charger, with only an optic added, as it doesn’t include one. None of the 22 Chargers include sights or an optic. While that does add to the overall cost, small scopes and inexpensive reflex sights are becoming more common. So again, you don’t need to spend a fortune to create a fun plinker. 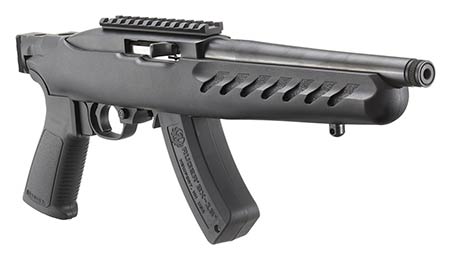 Resting inside a polymer stock is a Ruger Charger 10/22 receiver. The only difference between this receiver and the rifle versions is that it’s got “Charger” written on the side. That’s the 10/22 pistol designation. I chose this model for its 8″ cold hammer forged barrel. Of course, under the thread protector it’s threaded 1/2×28 for muzzle devices and suppressors. That barrel has a 1:16″ right hand twist rate for stabilizing most standard velocity ammo.

On top is a Picatinny rail for the optic of the buyer’s choosing. On the back is another Picatinny rail, for adding a side-folding brace. The grip is Ruger’s own, but any AR-style grip will fit, even with beaver tails. Overall length is just 17″, and it weighs just 52 ounces. A single BX-15 magazine is included, but all 10/22-compatible magazines will work. For bench or prone shooting, Ruger ships them with a little UTG rail-mount bipod as well. This nice touch includes an adapter for the sling stud. Just add an ammo and optic, and you’re ready for fun. 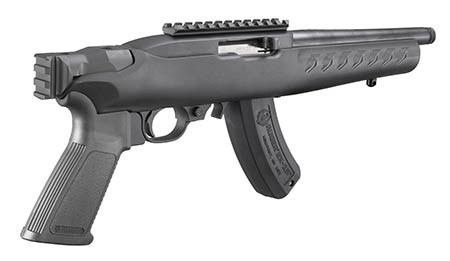 Okay, so it’s not really assembly, but I did install the bipod. It goes on easy enough with the adapter. Personally, I think that a stud mounted bipod would be better. Then again, Ruger has been forward-thinking a lot lately. Maybe they know how many of these Chargers end up in a chassis. At one time, I had six, each in an aluminum chassis. In that context, the bipod makes more sense.

With the bipod installed, I added my Vortex Spitfire on top. It’s probably larger and more bulky than what most would choose. But it doesn’t require a riser. I’ve noticed that with some low-profile reflex sights it’s not as easy to acquire the dot. To save my precious .22 ammo (not really) I used a Wheeler laser to sight in the optic. That done, I was ready to sling some tiny lead.

I recently scored a deal on some range ammo, at the old “normal” price of only 5 cents/round. So not all private party sales are at gouging prices. Anyway, with another 1,000 rounds on hand, I didn’t hold back. I brought 500 rounds of 36 gr copper HP Browning ammo, some cheap Winchester, and a single box of CCI Standard Velocity. Plus a pile of magazines. I was ready for fun, and the 22 Charger did not disappoint. My combined magazine capacity was 100 rounds, and they all got loaded at least 4 times.

Not sure how much was left in the Winchester box when I started, but I seem to have gone through about 450 rounds. During that time, there was a single failure to feed. This was due to a very dirty rotary magazine. I also had one stovepipe. Instead of stopping to take a photo, I quickly cleared it, and kept shooting. So I don’t recall whether it was with our without the suppressor. But it wasn’t the CCI, that I know. Either way, one out of 400+ is quite acceptable for a new, stock Charger. 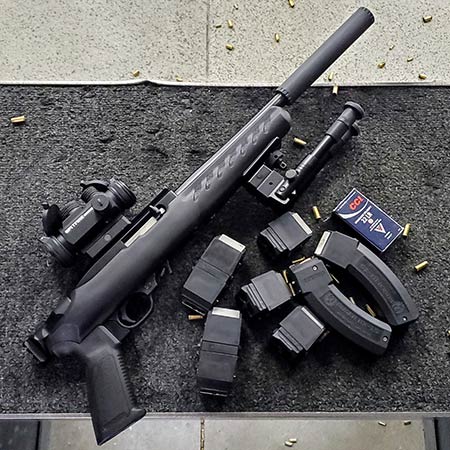 A 52 ounce pistol (before the bipod and optic) with a red dot sight and bulk ammo is an interesting setup. What kind of accuracy is expected? Well, that’s on the user. Because mechanically, it’s still a 10/22 with a very stiff 8″ barrel. With a scope, off a bench, I’ve read reviews of 2 MOA or better at 50 yards. Due to the weather, I was limited to the 25 yard indoor range. There, putting five rounds into an inch with just the red dot was easy enough. From a proper rest, with a good optic and the right ammo it will do much better. That accuracy is there if you want it.

Despite the accuracy potential, I don’t think that’s one of the bigger selling points of the 22 Charger. Most of the ones I see on different enthusiast websites don’t have scopes. Many have a brace, reflex sight, suppressor, and sometimes a binary trigger. They’re being used to hit steel plates at distance, which is something it easily excels at. It’s the compact size that holds the most appeal. Get a rifle if you want precision. For swinging from target to target, the 22 Charger is in its element.

I think it’s only fair that I cover all the things I usually do, but didn’t. And why. For quite a few of my 10/22 variants, I replaced the barrel, stock, trigger, bolt, and eventually the receiver too. Plus some internal items like an auto bolt release, aftermarket magazine release, and a non-steel buffer. Since this 22 Charger is on loan from Ruger, I did none of that. And yet, it ran as well as my custom Chargers that cost three times as much to assemble from aftermarket parts. That says something about Ruger’s quality today.

For those that do want to modify their 22 Charger, there is no shortage of options. Laminate target stocks and chassis options are plentiful. Although current aftermarket barrels are in high demand/limited supply, there are longer and shorter options. As well as lighter and heavier. Triggers? The only limit is budget. Competition light, or just smoother for field work, there is something for everyone. In a lot of color options too. Add a match bolt and charging handle from any of the big names for more reliable ignition and extraction. Finally, optics, braces and suppressors or other muzzle devices. If you want to go crazy, this is a great platform to do it with.

Going into this review, I wasn’t sure what to expect. Despite all my previous experience with the rifle and Charger platform, I haven’t owned a brand new, stock 22 Charger. The factory trigger was certainly good enough. My single stovepipe in a new firearm being shot rapidly is hardly a concern. Accuracy offhand or from the bench was more than acceptable, and I know it can be improved upon. A steel barrel and polymer furniture means you don’t have to worry about rough handling. Most important, it was just plain fun. Whether it’s kept stock, or is viewed as a platform for modifying, the Ruger 22 Charger will not disappoint.

I’d like to thank Ruger for loaning me their 22 Charger for this review. I’ve got a couple months left before it needs to go back, and will keep it around a bit longer. That 8″ barrel certainly makes it a compact suppressor host. I can’t get enough of that fun. Well, at least until I run out of quiet ammo.

Comments? Questions? Do any of our readers have a 22 Charger? Stock, or modified? Feel free to share below.