In October of last year, I shared my Ruger PC Charger review. At that time, it was on loan from Ruger. Before the loan period was up, I made the decision to keep it and turn it into a long term review. Since then, it got a few upgrades from TandemKross, and plenty of range use. I’ve made some small changes and tried a few different accessories too. Given the popularity of this firearm, I figured a follow-up was long overdue. I’m including some prices as well as my own opinions after about six months of use. 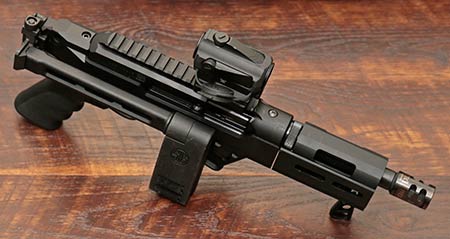 With the rear Picatinny rail, it’s a bit more involved to add something as simple as a KAK Shockwave Blade. Other SB Tactical offerings also require the same receiver extension (buffer tube), which won’t mount without an adapter. So far many, it’s either no brace, or a folder. And It seems that the SB Tactical FS1913 is one of the top choices for a brace. Expect to pay $160 or more for the polymer strut model, and about $200 for the aluminum strut model. If you can locate either.

I was able to get the polymer version, and was a bit disappointed. In my opinion, it’s great on the Ruger Charger (10/22 variant), but not so great on the PC Charger. Which is why I wasn’t surprised to see some other folks using the Sig brace instead. It’s called the Sig Sauer Folding PCB Kit for the MPX and MCX. Even though it can only fold to the right due to clamp design, I prefer the more solid lockup of the hinge mechanism. And I got mine via private party for $125, which was an added bonus.

Charging handles – which side?

Yes, every other firearm seems to have a right-side charging handle. But if you’re right handed, then using your support hand probably makes more sense. Luckily, Ruger makes it easy to switch from one side to the other. If you’re competing, or want to use the PC Charger as a defensive firearm, buy an aftermarket handle for one side, and leave the factory Ruger one on the other side. For me, it’s never been a question. But that’s because both my PC Carbines have their handles on the left side. 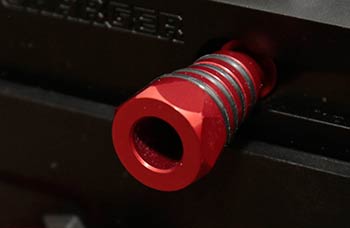 Magazine release – which side?

Like the charging handle, the magazine release is easily moved to either side. Unlike the charging handle, hitting the magazine release by accident can have serious consequences. The factory button is small and recessed for a reason. Oversized buttons are great, until you drop your magazine unintentionally. Currently, I have the TandemKross Titan on the left side. While it was on the right, I hit it too often. With the move to the left, I also adjusted my grip. Now, I can just palm the button and the magazine drops into my hand.

My logic, other than not liking dropped mags, was simple. As a right-handed person, I’d rather have both the release and charging handle on the same side. That’s what my support hand is for. In case anyone is wondering, my PC Carbines have a taller version of the stock button. I still haven’t settled on one style for all of them. 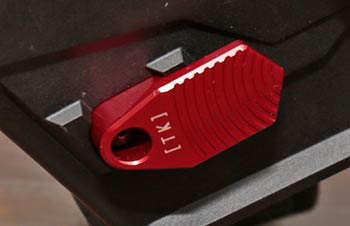 Like all three of my Mark IV pistols, and two of my 10/22s, I’ve got TandemKross Victory triggers in my PC Charger and PC Carbine. Well, I have a PC Carbine without one, but only because a friend has been asking nicely to take it off my hands. Familiarity is not the only reason though. It’s a genuinely nice upgrade at a reasonable price. Although the Volquartsen complete drop-in trigger unit certainly has piqued my interest. For now though, no change to the internals. Just a nice flat faced trigger that provides a little extra leverage, and reduced over-travel via an adjustment screw. 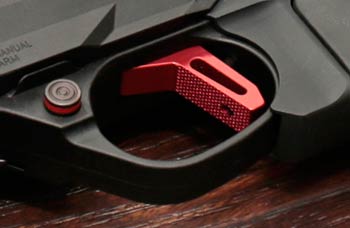 I don’t need a light on my PC Charger. That hasn’t stopped me from trying to mount one though, in the name of thorough testing. In the end, I gave up. There isn’t much real estate for mounting one to begin with. Ideally, I would like one under the barrel, but my support hand occupies that little space. I tried the left side, but activating it was awkward with my left hand, and using a pressure switch on the opposite side was not much better. Then I tried the right side, with a pressure switch on the left. Not a clean installation, but it might work. Also not a lot of room for tidy wire management. Luckily, I see no need for one. If you do, you’ll figure something out. Just realize it will probably be some sort of ergonomic compromise. 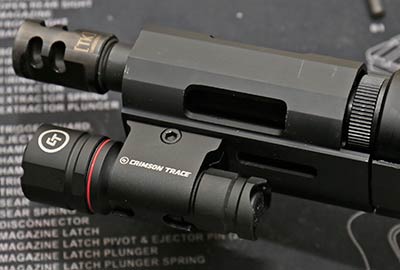 All four optics I tried were from Vortex. But Sig, Holosun, and Primary Arms, as well as others all make some with similar form factors. The micro-sized Venom is a favorite, but I didn’t like how low it sits. Next was a Strikefire II. Functionally, it worked. It’s not terribly attractive though, I don’t like the switches, and it’s got a lot of bulk. And the mount seems likely to damage the tube with rough handling. I sold it, as it just wasn’t working for me. My old standby, the Spitfire, doesn’t have enough eye relief. So I settled on the SPARC AR. Durable, simple controls, good eye relief. Liked it so much, I bought one for the PC Carbine as well.

I’m just going to offer one suggestion, and leave it at that. The Magpul MS4 Gen 2 sling. Can be used as a single point or two point sling. Quick and easy to adjust. If you have multiple firearms with QD sockets, this is the way. I keep one on the hat rack in my office. Works with the Ruger PC Carbine, PC Charger, my shotguns, ARs, and bolt action rifles. One sling for all the things. If you want to buy a sling for each firearm, go ahead. If you realize you can only shoot one at a time, and would rather spend the $60 or so elsewhere, that works too. I’ll eventually get a few more of this model, but if I could only have one, this would be my sling of choice. 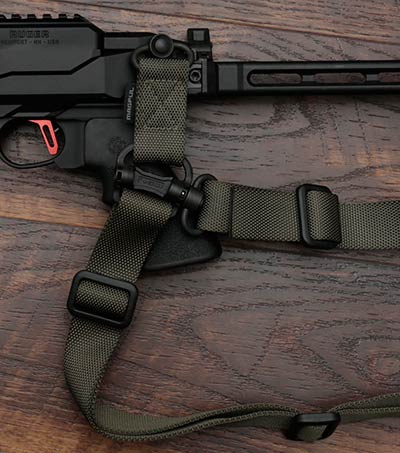 The PC Charger ships with a single magazine, which happens to be compatible with the Ruger Security 9. If you have a Security 9, and that compatibility matters to you, then run with it. If not, swap the installed magwell out for the included Glock compatible one. It only takes a few minutes to make the swap. Glock magazines may have gone up in price recently, but the Magpul versions I have been using have been just as reliable. Some users report mixed results with other aftermarket brands, which is why I’ve mostly stuck with Glock and Magpul. My favorite local gun shop has reported that the KCI 50 round drums seems to work pretty well too, so that’s another option. 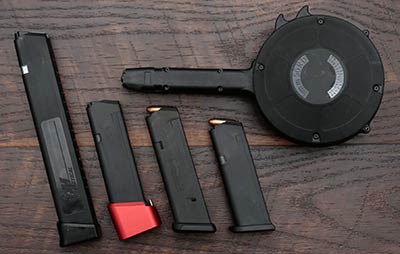 Some Glock and compatible magazine options for the Ruger PC Charger

Right now, I’ve got a TandemKross Game Changer Pro 9mm compensator. It probably helps a little bit, but this is a heavy 9mm “pistol” with a tungsten weighted bolt. There might be some felt recoil, but not a lot of muzzle rise. And despite my own lack of an appropriate one, the best muzzle device for this is a suppressor. In the words of Ferris Bueller, “If you have the means, I highly recommend picking one up”. 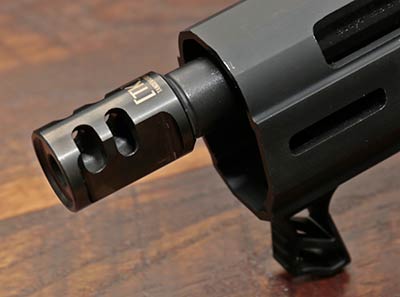 The sad truth is that for many people, ammo choice is a thing of the past. Now, you take what’s available and try not to think about it in terms of cost per round. I’ve run a steady supply of Browning, Winchester and dirty Magtech in 115, 124, and 147 grain, with no issues. What I have not tried is any steel-cased ammo. The last firearm I used steel ammo in required a trip back to the manufacturer for warranty work. Even when this PC Charger still belonged to Ruger, I couldn’t bear to abuse it in that way. Now that it’s mine, I’m even less inclined.

That one thing I did, which was free

In an effort to get the handling a little closer to my PC Carbine, I made a small change to the included hand stop, and moved it to the front of the tiny handguard. This gave my hand a little extra room, and it feels less cramped. I can still use a magwell grip if I want, but can also move my hand forward. Not being so cramped has also helped with the unintentional magazine drops. This is another personal preference setting, but it doesn’t cost anything to try it out.

That about wraps up what’s been going on with my PC Charger over the last several months. At the range, it gets a lot of attention. I let friends and strangers shoot it often (Pro tip: keep some magazines loaded with ten rounds for strangers) and they always have a smile when doing so. It continues to be boringly reliable, going bang every time without fail. As I’ve set it up to mimic my PC Carbine as closely as possible, I’ve found that most of the time, I do prefer this shorter version.

If I’ve forgotten something, or you have a question about any of the parts I have tried, either email me, or ask away via the comment section. For more details on the TandemKross upgrades, including installation notes, read my original article about them here. If you just want to see all the cool stuff they have to offer, click here for the TandemKross website.