Manufacturing a firearm like the Ruger PC Charger can be a tricky business. There’s a balance between making each part to the ideal spec, and making the firearm affordable. Which is why the aftermarket for firearms is so big. Brand new firearms often come with parts that are just “good enough”. They do the job, but they aren’t the “perfect” design. That’s because a little extra machine time, a little extra coating time, and a little extra fitting time all add up. So unless we’re going high-end or full custom, we get parts that work, not parts that work awesome. Thankfully, there is always someone out there offering something better. And it’s usually reasonably priced too.

TandemKross is one of those aftermarket suppliers. They design, produce, and sell upgrades for a variety of firearms. I’ve got plenty of their parts on my Ruger 10/22 rifles, and Mark IV pistols. Since they had already provided some internal parts for one of my PC Carbine projects, I figured we should try some others on the PC Charger. I already had their Game Changer Pro 9mm compensator, as I felt the Carbine didn’t need that so badly. So I requested a Victory trigger, Titan extended magazine release, and Challenger charging handle.

Although this was covered in the Carbine article, here’s a recap and update. It’s 1.5 inches long, and just under 1 inch wide (.99″). Machined from steel, it weighs 2.83 ounces. Having that weight hang off the front of the barrel, with holes designed to vent gases at 45 degrees helps the PC Charger shoot very flat. On my heavy carbine, it wasn’t as noticeable, but I love it on the PC Charger. I feel it makes a definite difference. Watching someone else shoot my Charger really confirmed that it keeps the muzzle on target. And it looks pretty sweet too. The only reason I’d remove it is to install a suppressor.

Speaking of installing, this is one of the easier upgrades. Just remove the factory thread protector, and carefully install this in its place. It includes an O-ring, rather than a crush washer, making it easy to time to the barrel. I seem to have a shortage of 9mm handguns with threaded barrels, but plan on testing it on a polymer pistol, where it should make a very noticeable difference. MSRP $59.99 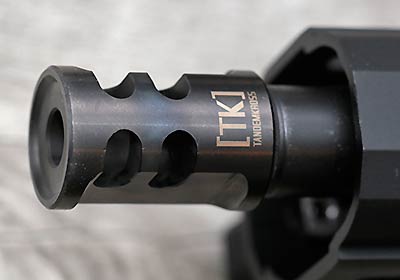 Here’s another part that is also on my PC Carbine. And all three of my Ruger Mark IV pistols. Plus at least two of my 10/22 rifles. While I was initially skeptical of flat-faced triggers, they have grown on me. Although the texture might be too aggressive for some, I don’t mind it. More importantly, the wide face allows for more consistent finger placement. Even better, I can keep my finger lower on the trigger for better leverage. It may not be marketed as an alternative to a trigger job, but for some users, it could just be all they need.

If you’ve ever worked on a Ruger 10/22 trigger, installation will seem familiar. If not, it’s still quite easy. It’s pretty much a drop-in replacement for the original factory part. The hardest part is fumbling with the pins, and TandemKross makes that easy with the included slave pin. Once it’s installed, the included wrench can be used to set the over-travel. Just don’t overdo it, as that may result in the trigger failing to reset. Due to the loose tolerances of the factory parts, you can’t completely remove the over-travel. But the result is still a much better trigger feel that’s perfect for typical range use. Available in black or red (+$5) anodized aluminum. MSRP $49.99 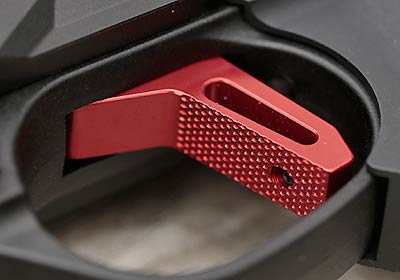 There are a lot of charging handle options for the PC Charger. And since it’s ambidextrous, you can even run one on each side. My preference is for left-side charging. And the Challenger fills that role nicely. It’s big enough to grab, but not so big it becomes a snag concern. The tapered design and rubber o-rings allow for a good grip, even with gloves on. I really appreciate when an inexpensive part can dress things up a little, but adds an equal amount of improved functionality.

This is another “unscrew the old one, screw on the new one” part. TandemKross includes the necessary screw, which is nice, because then you have the option of keeping the original handle on the opposite side. Just in case. Personally, I haven’t found a reason to have two charging handles. But it’s nice to know that if I wanted to, it would be easy enough. Like many of the other parts, it’s aluminum, and available in black or red (+$5) anodized finish. MSRP $19.99 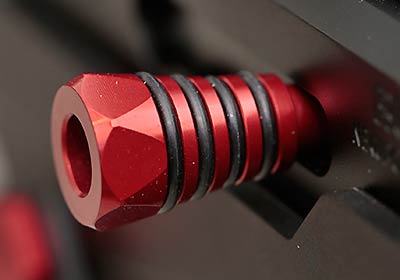 I saved the most controversial part for last. I’ve actually got this part in black, which I gave to my son for his PC Carbine. The red one seen here was ordered to match the other red bits. Time will tell whether I really love this part or not. The factory magazine release is too small, and doesn’t stand out beyond its recess very well. You’ll never hit it by accident, but it slows reloads. The Titan is the opposite. It stands out, and is much larger. This is either wonderful, or horrible, and a lot of either has to do with how the PC Charger is gripped.

With a magwell grip, installing the Titan on the right-hand side resulted in dropped magazines. One solution is not to use a magwell grip, but that’s something that’s been drilled into me for too long. When installed on the left-hand side, the same grip sometimes caused my palm to release the magazine. But not nearly as often. I even moved the handstop closer to the muzzle, to make more room for my hand. In the end, I think I will need to shoot my PC Carbine and PC Charger together in the same day, and see which hand position happens most naturally. Because I like the Titan in principle, but unintentional mag drops are not ideal.

On the bright side, installation is again super easy. Remove the factory unit, and replace with the Titan. Unlike other aftermarket magazine releases, this one uses the factory screw. If you’re planning on switching the release to the opposite side, consult the instructions provided by Ruger. Either way, it’s not at all difficult. This might be a good time to point out that none of the modifications I’ve made to either the PC Carbine or PC Charger have been particularly challenging. Ruger really did make them easy to modify. The Titan is available in the usual black and red, as well as silver. MSRP $29.99 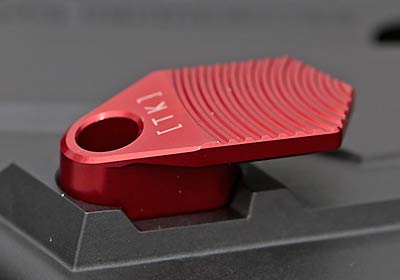 So what do they all add up to?

If your goal is to improve the overall function of your PC Charger (or PC Carbine), these are just some of the parts available. Yes, they do dress up the looks of the PC Charger a bit too. But they are much more than that. Charging is improved with or without gloves. The trigger has a nicer feel, and if used for competition, can probably help with more consistent shot placement. And reloads are faster. That’s really what it’s all about. When TandemKross sets out to design external parts, they are both visually and functionally better than their OEM counterparts.

As a side note, I need to point out why I almost always choose red parts for my reviews. There’s no question that the black parts look great (although I’d prefer a matte black myself). But the black parts simply don’t stand out as well for the photos.

I’d like to thank TandemKross for sending these parts for review, and for their continued support. As long as they keep making great parts and accessories, I’ll keep sharing them. Feel free to check out their other products at TandemKross.com.

Comments? Questions? Have any of our readers added any of these upgrades to their PC Carbine or PC Charger? Feel free to share below.