Ruger’s PC Carbine has been very popular, so they followed it up with a PC Charger. Is it better than the original? That’s a matter of personal preference. But it certainly seems to be more sought-after. And for good reason. It’s chambered in 9mm, has the option to use Ruger Security 9 or Glock magazines, and is highly customizable. Add a reflex sight and maybe a brace, and it’s an excellent range toy that would work well for home defense too. More compact than a rifle, yet able to score hits out beyond typical pistol range, it’s a lot of fun in a small package.

The PC Charger owes much of its existence not just to the PC Carbine, but to the Ruger 10/22 that they are both loosely based off. Neither is Ruger’s first effort at a centerfire rifle based on that 10/22 design. From 1996 to 2006, Ruger offered the PC9, a fixed-stock 9mm (And PC4 in .40 caliber) rifle. These were also based on the 10/22 design, and utilized Ruger’s P-series handgun magazines. Originally intended for law enforcement, they were available to civilians, but didn’t really catch on with either. At the very end of 2017, Ruger shared the news of their new PC Carbine, which many feel is an improvement over the PC9 in every possible way.

Now we’re going to step back to late 2007, when the 22 Charger was released. Although briefly discontinued, it returned again in 2014 with a Takedown option, which ended up being very successful. Seeing an opportunity (they already had a scaled-up 10/22 in the PC Carbine), Ruger gave us the PC Charger. Field strip the PC Charger, and the trigger group, safety, bolt release, and even the bolt will seem familiar to any 10/22 owner. They’re not the same, but close enough. Which is great, since it’s a design that works reliably. Of course, the 9mm round is much larger, and has a completely different recoil impulse. So a skinny little recoil spring wasn’t going to cut it. Ruger resolved that with a custom tungsten dead blow weight. It shortens bolt travel, which reduces felt recoil as well as muzzle rise.

The back half of the chassis, which holds the 7075-T6 aluminum Type III hardcoat receiver, is glass-filled polymer. It’s got a 7075-T6 Picatinny rail on the tail for attaching a brace, which has been a popular accessory. While the factory grip is fine, it can be swapped for just about any AR-style grip. Yes, even ones with a beaver tail. In front of the trigger group is a flared magwell. Ruger ships it with an insert that takes the included Security 9 magazine. But it’s a quick job to swap it out for the included Glock-compatible magwell. A third option, for Ruger American pistol magazines, is available directly from Ruger.

Up front is the tiniest M-LOK-compatible handguard I’ve ever seen. It’s CNC machined and given a durable Type III hardcoat. This contains the 6.5″ barrel, as well as the takedown mechanism. Why does a 16.5″ firearm need a detachable forend? It really doesn’t. But it did allow Ruger to design the PC Charger without spending a bunch on extra tooling. It’s all lifted off the PC Carbine, with the stock and 10″ of barrel cut off. Sure, there’s a bit more to it. My point is that Ruger didn’t need to invent an all new firearm with the PC Charger. They just made an existing one shorter. And cooler, in my opinion.

A pair of QD sling sockets at the rear make the PC Charger easy to carry, despite weighing 5.2 lbs before adding an optic and loaded magazine. The handguard’s M-LOK slots at 3, 6, and 9 o’clock let you mount lights, lasers, angled foregrips, or Skittles dispensers. Although there’s not much real estate for longer accessories. Ruger thoughtfully includes a handstop to keep your support hand from wandering towards the muzzle. Good call there. Looks great too. A thread protector hides a 1/2 x 28 threaded muzzle. This makes it easy to add a compensator or suppressor.

All the features I just listed are pretty standard. But Ruger didn’t stop there. The charging handle is easily moved from one side to the other. Heck, run two if you want. Then there is the magazine release. Again, it’s easily swapped from one side to the other. Of course you’ll find plenty of aftermarket options for both. More than one user has pointed out that Ruger has provided a platform that’s designed to be modified to the owner’s tastes and needs. You can even find aftermarket accessories for it on the Ruger website. So go ahead, make it your own. Although it’s just fine in stock form too.

Removing the forend assembly is actually super easy. Once the bolt is locked back, it’s a matter of grasping the rear of the Charger with one hand, while holding the front with the other. Using what amounts to a reverse c-clamp, put your fingers over the handguard, with the thumb underneath. Pull the lever hidden in the underside back with the thumb. About an eight of a rotation (downward if you’re right-handed), and the forend with the barrel will pull free. Installation is the reverse, and it only takes doing it few times to become pretty intuitive.

There are a few reasons to take it down. Storage or transport are pretty obvious. But it also makes cleaning simple. One thing to note is that there is a large lockring on the forend. This is what allows that connection to remain solid, even if there is some variance in manufacturing tolerances. Although I don’t think it’s possible to wear down the connection surfaces, that can easily be accounted for as well.

Ruger includes instructions and tools for replacing the magazine well. I kept the Security 9 well in the Charger, as it makes a great companion to that pistol. Though having replaced the magwell in my Carbine with the Glock version, I found it to be a simple process. Whether to have the charging handle on the right or left is another option. I definitely opt for left-handed charging. As for the magazine release button, I tried both sides. For me, left side seems to work best. Reaching around to the right side just didn’t seem very convenient. Neither option is terribly ergonomic with the low height of the factory button, which may explain the proliferation of aftermarket options. It’s not terrible, but I can see where it’s not ideal for competition-speed reloads. With that sorted out, a Vortex Spitfire was mounted. I ended up trying three different optics though. 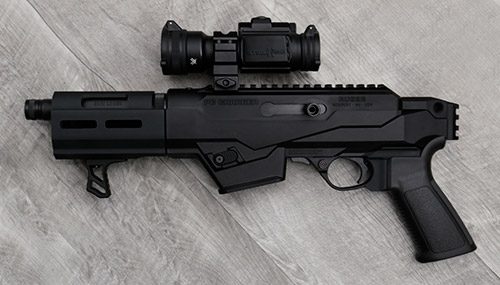 Shooting is always my favorite part of any review. The noise, the recoil, the sound of lead on steel, and the sweet smell of my hard-earned dollars going up in smoke. I really need an ammo sponsor. Since the PC Charger ships with a single 17-round Security 9 magazine, it at least took me a while to get through the first few boxes. Loading was easy with the flared magwell, and it was a smooth transition to the charging handle. 10/22 owners will be right at home with the safety in front of the trigger. As expected, there were zero malfunctions, even with a box of Blazer aluminum thrown into the mix. Blazer, Browning, and Magtech 9mm was used, in 115 and 124 grain.

From that first outing, I made a few changes. The Spitfire was replaced with a Vortex Venom, and finally a Strikefire II. I also added a Magpul MS4 Gen 2 sling. This helped steady it a bit over longer shooting strings. As much as I would like to add a brace, I felt it was only fair to evaluate it closer to the factory configuration. Also, where the heck have all the folding braces gone? Everyone I checked with was sold out. Through several range trips, and hundreds of rounds (millions of dollars in today’s firearm economy) there were zero failures. Can’t say I’m surprised, as I probably have close to 1,000 rounds through my PC Carbine with similar results.

Thanks to my wife’s penchant for shopping, I have a nearly unlimited supply of cardboard boxes for making our own IPSC/USPSA-style cardboard targets. Much has already been written of the accuracy of the braced Charger, and it’s clearly no slouch with just a sling. At ten and twenty yards, I had no trouble holding groups to 2-3 inches. That should extend out to 50 yards with a brace, but it’s certainly acceptable for home defense distances. We also set up a 10″ gong at around 40 yards, and that wasn’t much of a challenge either.

Contributing to that accuracy is Ruger’s 6.5″ cold hammer-forged barrel. Of course, the trigger can take some credit too. Based on the design of 10/22 trigger, it broke consistently in the 4 pound range according to my digital meter. Although bigger and heavier than a typical 9mm handgun, the PC Charger allows even new shooters to easily score more hits, which to me is one of the key benefits of the design. Whatever the shooting application or discipline, being able to keep your rounds on target is always important. 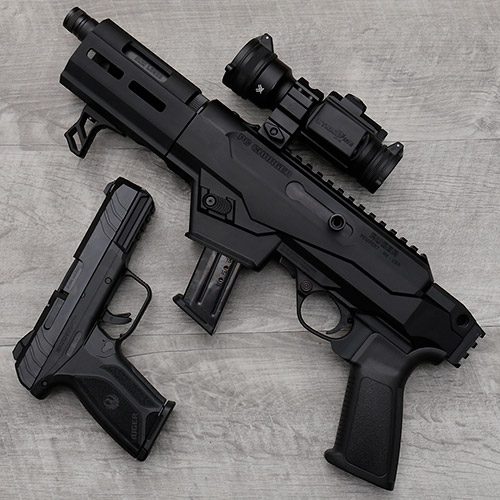 There’s not a lot that hasn’t already been said about Ruger’s PC Charger. It’s an iteration of successful designs going back to 1964. For new or experienced shooters, if offers potentially greater accuracy than a standard handgun, while being more compact than a rifle. If you like to tinker, customize, and “make it your own”, Ruger and the aftermarket are happy to oblige. Ruger Security 9 (and Glock 9mm) owners have the option of sharing magazines between the two platforms. Restricted states may be limited to a ten round magazine, while owners in free states can run a 50 round drum. So much potential fun in one small package. Grab one if you can find one.

I’d like to thank Ruger for loaning me their Ruger PC Charger for this review. Check it out at Ruger.com.

Comments? Questions? Do any of our readers own the PC Carbine and/or Charger? Is the sequel better than the original? Feel free to share below.