When I first saw the SB22 Fixed Kit from SB Tactical, there was no question that I’d need to get one. I’ve had a completely stock 22 Charger since last October. It’s the perfect “drop-in” barreled action for this lightweight polymer chassis. Although the SB22 Fixed Kit chassis can be used on either a pistol or rifle, the rear Picatinny rail makes it ideal for a Charger. Combining the 8″ barrel with a folding brace yields a compact little plinker that’s fun to shoot.

As the $124.99 MSRP might suggest, this chassis is polymer, not machined aluminum. It does have an aluminum insert though, which should aid in rigidity. Overall length is just 15 inches, and it’s 1.5 inches wide for most of that length. Weight is 17 ounces, putting it very close to the Ruger factory piece, but with some design improvements that certainly justify the price. 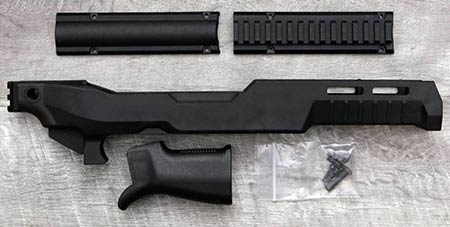 The chassis itself has a rear Picatinny rail section for attaching a brace or stock. Just ahead of that rail is an ambi sling QD sling socket. At the front, there is a nice recessed handguard molded in. It’s got 6 M-LOK rails, with two each at 3,6, and 9 o’clock. Two covers are included for the area over the handguard. Choose from a curved but smooth flat top cover or a Picatinny bridge mount when assembling the chassis. As an added bonus, SB Tactical even includes a Reptilia COG grip. Any AR-pattern grip should fit, even some with beavertails. 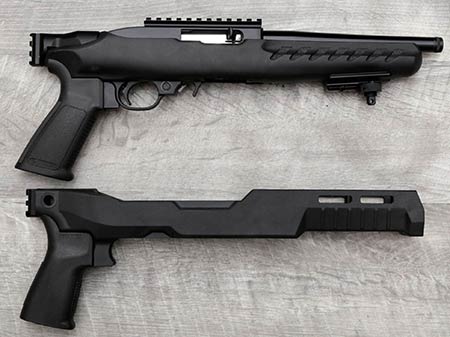 My factory receiver dropped right in with no surprises, and is held in place by a single screw, just like OEM. I chose the Picatinny bridge mount over the flat top cover, more for aesthetics than anything else. It’s attached with four small screws. Since the Reptilia grip is included, I went with that, even though it’s not my ideal grip. Completing the assembly was an SB Tactical SF1913 brace, which I will fully cover in a separate article. At that point, I topped it off with a Vortex Viper red dot, and after a quick laser zero, it was ready to go.

As mentioned, my OEM receiver dropped right in. There’s always a little bit of fiddling with the safety, but that’s normal. Any gaps around the action are tight and uniform, with no wiggling. Up front, the handguard cutout provided a good gripping area. Although the trigger guard to chassis, and grip to chassis fit were great, I did have one concern there. On the section that works as a spacer between the trigger guard and grip, the edge was a bit hard. I’d prefer to see that transition have a smoother radius, and may give it a little contouring at some point. It’s not terrible, but could be better. Otherwise, it’s very comfortable to carry and shoot.

The barrel was centered in the chassis laterally, but sits a bit high. It’s so high, the Picatinny bridge has a recess cut into it. That’s also why the “flat top” piece is actually curved as well. A .920″ would be a tight fit on the top, with more space underneath. That’s a concession that had to be made to fit the rail. A 10/22 patterned firearm has the barrel high in the receiver. So this is an issue with all chassis systems, as there is limited room when trying to design a rail over the barrel that lines up with the factory rail on the receiver. But SB Tactical made it work well for their SB22 Fixed Kit.

Because the bridge is held in place by four screws which thread into the polymer chassis, I do have some reservations about mounting an optic on it. Removing the rail for maintenance or cleaning could affect the zero. So I just mounted my optic on the receiver, as far forward as I could, which is where I usually place them. If you do a full takedown and cleaning after every outing, this is something to consider. The other issue is the M-LOK slots. They are probably fine for a rifle build. For a Charger, my hand covers all but the right side’s forward slot. I’ve got no need to mount any accessories, so it’s not an issue for me. Just something to keep in mind if you’re into handstops, lights, and lasers. 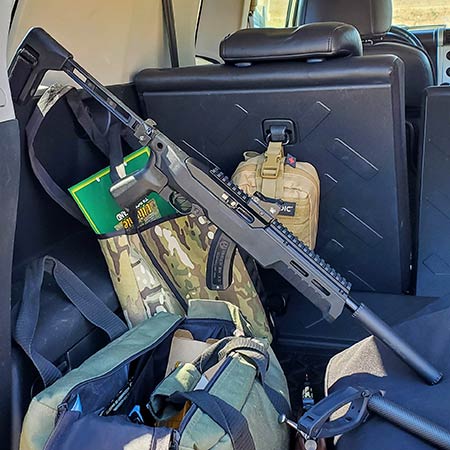 This certainly isn’t my first chassis, but even with the low MSRP, I had some high expectations. And the SB22 Fixed Kit did not disappoint. It maintains the same light weight of the factory chassis. And there’s a more natural gripping area for the support hand. In my opinion, it looks better too. With the brace providing a cheek weld, shooting was fun and comfortable. A slightly taller red dot, or small riser, might work better for some shooters, as I had to bring the brace up pretty high to get good alignment. Keeping empty cans dancing until they were out of range (or the magazine was empty) was certainly easy enough.

Note that with an 8″ barrel, my support hand’s thumb was less than an inch from the muzzle. This wouldn’t be a concern with a barrel of 10″ or more, but if you have a short barrel, then either a compensator or suppressor might be a good idea. Well, a suppressor on a .22 is always a good idea. Speaking of suppressors, I don’t see this setup working well with a shorter 4.5″-6″ barrel and suppressor. There just isn’t enough room inside. In other words, if you’re not using it on a rifle, then consider an 8-10″ barrel as the minimum for a Charger.

The whole notion of rimfire being “cheap fun” has been turned on its head. In my younger days, we’d grab an $8 brick of ammo for an afternoon of shooting. That brick is closer to $50 or more now. The 22 Charger can be hand for around $300. Budget at least another $100 for a simple reflex sight. From there, it’s easy to spend $250+ on an aluminum chassis system. And that doesn’t even include the grip, stock, or brace. So they’re anything but cheap. Yet SB Tactical managed to provide an alternative chassis at a reasonable price. I’ve seen the SB22 Fixed Kit sold for as low as $89.99, making it a really good deal. If you’re looking to upgrade your 22 Charger or 10/22, give it a look at sb-tactical.com. Note that they also make one for the Takedown models. That’s another win.

While a lot of the stuff I review is bought and paid for out of my pocket, some gear is provided for testing and evaluation. So I’d like to thank SB Tactical for sending their SB22 Fixed Kit for my review. I really enjoy the opportunity to try out innovative, American-made products that make shooting more fun.

Comments? Questions? Have any of our readers tried out either of the SB22 chassis’ yet? Feel free to share below.