If you’re like me and most other Americans, you’re stuck at home for a while. Working from home leaves me with a little extra free time, which is nice. Plus, I can skip the commute, which saves on gas (more money for firearms!). Luckily, I’ve got something besides Netflix to keep me occupied. I had previously purchased a couple of 10/22 receivers from S&P Outfitters, out of Fort Worth, Texas. And since the government determined that gun shops are essential, they’re still open. So I suggest purchasing a receiver, and building a new rifle or pistol. Hopefully, your local FFL is still open.

My first thought is, why not? But they have great prices on new, stripped 10/22 receivers. Actually, they have great prices on just about every factory 10/22 part you could want. I usually go with the blems, as a bit of missing paint that gets covered by the scope rail doesn’t bother me. By watching and waiting for sales, or using their email reminders, I got my standard receiver for $64.99, and blem Charger receiver for $59.99. Bargains. Even with a wholesale account, an aftermarket one is at least twice as much. Plus, orders over $75 ship free. Less than that, and it’s only $5 postage. (Read on to find out how to save an extra 5%)

Here’s the Charger I’m piecing together. Factory receiver, Pike Arms/Tactical Innovations match bolt and buffer, KIDD drop-in trigger, and KIDD 10″ barrel. Receiver pins are TandemKross KrossPins, the only ones I use now. It’s got their Guardian auto bolt release too. I’ve got a stock (actually a chassis) on the way, and just need to choose a brace option. It’s going to be a very compact tack-driver. 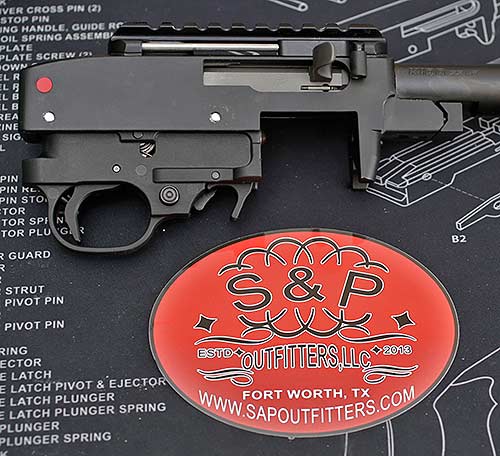 Charger project, based on a receiver from S&P Outfitters

Whenever possible, I recommend a Charger receiver over a standard one. This way, you can build it as a pistol or rifle. With the popularity of braced pistols, it just makes sense. If you consider that building an SBR requires a $200 tax stamp, for essentially the same thing, a Charger receiver can be a money-saving proposition. At least, that’s how I justify some of my projects.

Carbine project, based on a receiver from S&P Outfitters

While it’s got a KIDD trigger for the photo, the trigger group will be swapped out for a factory unit. And that’s going to be upgraded with a red Victory trigger from TandemKross. The rest of the trigger internals will get a bit of work as well. I had planned on using my 20″ WhistlePig GunBarrelCo barrel. After some thought, I decided to swap it for a 16″ I have. This black and red 10/22 is going to be part of a matched set, with one of my Tandemized Ruger MKIV 22/45 pistols.

You don’t have to spend a fortune. Pick a receiver, do some homework, and choose the rest of your parts. Many people who own 10/22s have more than one. And most of us probably already have a few spare pieces. So build another. Go mild, or go wild. Maybe cut down a birch take-off stock for your kid’s first rifle. Or find an adjustable stock so everyone can use it. Maybe you hate money, and want to build a really nice Takedown (personal experience) or target rifle. The options are endless. Just set a budget, and have some fun.

Between the research and ordering, it should keep you busy for a while. Not sure about a certain combination? Head over to Rimfirecentral.com, and ask. That’s also a great community of like-minded enthusiasts to occupy some time. Then you get to assemble all the parts. And “quarantine” doesn’t mean you can’t go shooting. If you’re fortunate enough to have an outdoor range, or at least a safe spot to shoot, go for it. We shoot behind our local landfill. There are “lanes” 100-150 yards long. No fees, no waiting. And right now, no people.

Even if you don’t have the budget for a complete build, now’s a good time to tear down your 10/22, and maybe do some maintenance or upgrades. And as promised, if you need to order from S&P Outfitters, they’ve offered our readers a little discount. Just enter “Industryoutsider” (no quotes) in the Coupon box at checkout. Instant 5% savings!

By the way, this article was not suggested in any way by S&P. I’ve actually been a customer since 2017, and was paying full price until recently. When I mentioned that we were using their parts in our projects, they offered the coupon code for our readers. So now you can get the same discount I get, and help support the industry. www.sapoutfitters.com

Comments? Questions? Have any of our readers bought from S&P? Feel free to share below.