Who needs a Strike Industries AR Carbine Flat Wire Spring? Well, possibly anyone that enjoys shooting modern sporting rifles. With so many caliber choices and configuration options, the AR platform is America’s favorite firearm. While some people treat them as defensive weapons, plenty are used for recreational shooting. Whether that’s at an indoor or outdoor range, I’d guess most of them punch little holes in paper. Sure, some of us have the luxury of long range shooting, and steel targets. Then there’s the 3 gun competitions, or varmint, predator, and nuisance animal control. Regardless, for most shooters, it’s about practicing and training to hit your target or targets.

Over the past few years, prices for rifles have come down quite a bit. It’s now possible to get a serviceable one for under $500. Even then, many of us choose to assemble our own from individual parts. That’s the path I took, and it’s been rewarding on many levels. First, I have a better understanding of exactly how my rifle works. Second, I get to select each component, based on performance, price, and whatever other criteria is important to me. Finally, there’s the satisfaction of doing it yourself. 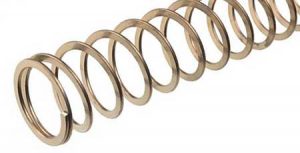 Do I need the very best for a paper-punching range toy? Probably not. But reliability is still important. I had already assembled a pistol and carbine using parts from well-known brands. Although they are not top-tier brands, they’re not junk either. Perfect for occasional target shooting with my daughter, co-workers, and friends. Of course, I have a hard time buying expensive ammo for shooting paper. So we end up with a lot of surplus, and inconsistent quality. That meant light strikes (or hard primers) and some cycling issues more often than I would like. And that’s where the Strike Industries AR Carbine Flat Wire Spring comes in.

Strike Industries claims their AR Carbine Flat Wire Spring “increases service life of the platform, smooths out the shooting cycle, and greatly outlasts the stock spring”. Honestly, I’ll probably never wear out any of my rifles. And whether shooting .223 or 5.56, the recoil is not really an issue, although more noticeable with a shorter barrel. It’s the next sentence that got my attention. “Increased bolt load, in addition to decreased compressing force increases reliability in cycling”. My 10.5″ pistol was pretty finicky. So that sounded like exactly what I needed. And for $20, it was worth a try. Of course, Strike Industries was kind enough to provide one at no charge for my review.

Installation takes about five minutes, if you go slow, and do it while enjoying your morning coffee. Once installed, I had yet another excuse to go the range. Yeah, I probably used the “product testing” excuse a dozen times. Could I detect “decreased harmonics”? Did I get back on target faster? Was the “twang” of my rifle banished? The answer to those questions is, “not to any measurable degree”, although I do feel like maybe it was somehow smoother. (For what it’s worth, both my pistol and carbine never had much “twang”). But, pistol malfunctions also dropped from a handful per session, to exactly zero. Same thing when I tried it in the carbine. Every round loaded, went “boom”, and ejected exactly as they should. Is that due to the spring alone? Hard to say, yet that’s the only change I’ve made.

Checking online, I found springs as cheap as $3.50, and plenty in the $8-$12 range. So is this one worth $20? If your current rifle cycles smoothly, don’t fix what isn’t broken. But if you are working on a new build, or have some cycling issues, I’d certainly give it a shot. Adjustable gas blocks, different buffers, and extra power hammer springs all exist for a reason. Some rifles just need more tuning than others. When I received the AR Carbine Flat Wire Spring, I wasn’t expecting any miracles. And perhaps I just needed to run a few hundred rounds through each firearm to smooth things out. The fact that my issues suddenly resolved themselves leads me to believe there are some benefits to the spring. And I don’t see any downsides. Going forward, I’ll use them in every AR I buy or build.

If you’re spending hundreds on a rifle, and shooting probably $50-$100 or more in ammo per session, spending a few bucks extra on a spring shouldn’t be a deal breaker. Find it, and plenty of other parts and accessories, at StrikeIndustries.com.

A special thanks to Strike Industries for providing their AR Carbine Flat Wire Spring for this review. I had already purchased a grip and mag release from them. They’ve got products that improve function, looks, and performance, all at reasonable prices.