In my quest to build the ultimate 22 Charger, I got my hands on a Summit Precision carbon fiber barrel. Normally available as an 18.5″ barrel, Summit Precision will do custom lengths. So mine is a 10″ Charger-length barrel. Where many companies are offering a steel barrel with an aluminum sleeve, Summit Precision’s barrels are stainless, with a carbon fiber sleeve. And they have plenty of color options.

Each “off the shelf” .920″ barrel is built around a 416R stainless steel blank, with a carbon fiber sleeve. Twist rate is 1:16, and they’ve got Bentz chambers. Total weight with the included 1/2 x 28 thread protector is 23.2 ounces. That’s a savings of 5-6 ounces over a factory barrel, but with a generous increase in rigidity and accuracy.

My 10″ barrel only weighs 14.7 ounces. A 10″ steel OEM barrel weighs 18 ounces. That’s about 20% less weight, with no loss in barrel stiffness, and an improvement in accuracy. Plus it really looks good. 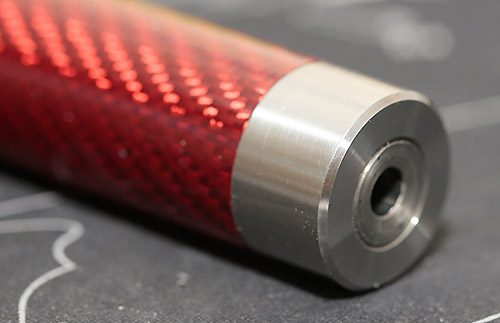 Summit Precision carbon fiber barrel crown. Notice you cannot even see the seam for the thread protector on the side.

Matt, the owner of Summit Precision, has spent more than a few weekends in Utah’s wide open spaces, with precision centerfire rifles. He’s applying some of the same construction techniques to his rimfire barrels. That means a tight fit between the barrel tenon and receiver mortise. Where I usually apply some heat to the receiver and stick the barrel in, I didn’t want to do that with a carbon fiber barrel. So I used the included emery paper to sand down the tenon a bit. And by a bit, I mean a lot. The mortise on the Tactical Innovations receivers I use is very snug. So I got it to right where it had the tiniest resistance, oiled it up, and tapped it in. It’s probably a bit easier with a factory receiver.

With the solid fit of an aftermarket barrel and receiver, the V-block seems a bit redundant. But I installed one and then the charging handle and bolt. After double-checking to make sure that the extractor was properly timed, I used some TandemKross Krosspins to install the trigger group. Finally, I dropped the barreled receiver into my chassis and was almost ready to go. Since this was a Steel Challenge-style build I reinstalled my Vortex Viper red dot and zeroed it using a laser. 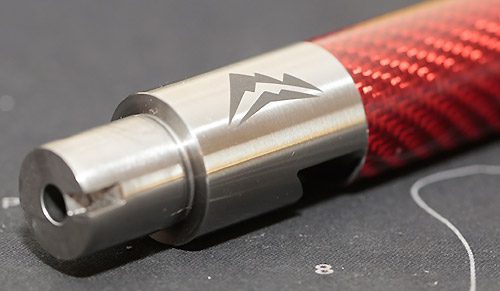 After dialing in the zero at the indoor range, I ran over 150 rounds through the barrel to fully break it in. The very first round failed to eject. I’m certain that this was because I didn’t give the bore a quick cleaning after all that time with the emery cloth. So I gave a quick pass with a bore snake. For the remaining rounds, I had zero failures of any sort. I used Ruger BX-1 ten-round magazines with a coupler. So it was ten rounds, flip, and ten more. Then two passes with the bore snake, and another 20 rounds. After 120 rounds, I switched to 25 round magazines, still cleaning the bore between magazines.

Although I wasn’t shooting for groups, I did note that each five-round group basically had all five rounds touching. Not terrible for a reflex sight and a rest. And they got progressively smaller as I kept going. While most were about a half inch, the smallest measured 0.40 MOA, according to my Ballistic-X app. Sure, five shot groups at 25 yards don’t really mean much. But the consistency from group to group gave me hope for part 2 of my testing.

Maybe I should have labeled this “Epic Fail” on my part. Before I get into it, I have to clarify. Summit Precision makes excellent rifle barrels. Their customer feedback confirms this. But I didn’t ask for a rifle barrel, and I didn’t install it on a rifle. And that is where things went terribly wrong. In an effort to really test this 10″ barrel, I added a Vortex Crossfire II 6-18×44 scope. The original brace was replaced with an SB Tactical SBA3, plus a bipod was installed. At that point, I had the goofiest looking Charger setup. And then I made a few trips to the outdoor range.

In theory, the SBA3 should have provided a decent cheek weld off the bench. But it’s not legal to shoulder a brace (intentionally), and the length of pull at a legal 13.5″ didn’t help with stability. So this setup was just too short to get comfortable, and the consistency I had at shorter range was hard to reproduce. Over multiple trips, I was able to get groups of just over a half inch (1.10 MOA), but it was frustrating, because I know the barrel is capable of better than that. I don’t think it was the ammo, which consisted of a few flavors of CCI, and some Aguila Centurion. At 50 yards, an aftermarket barrel should shoot 1 MOA with quality ammo. It wasn’t the ammo holding me back though. It was my awkwardly braced pistol.

Fact is, most Chargers seem to end up with small reflex sights. They are made for fun, speed, and convenience. Accuracy is still important, but it’s not the primary feature of a Charger. Nevertheless, the Summit Precision barrel certainly delivers. Hitting 2″ spinners at 30 yards is easy enough. Bigger gongs at Steel Challenge distances are a breeze as well. And it’s light. Plus the color options. For competition, it’s okay to stand out with a wild-looking race gun. This won’t disappoint anyone who subscribes to that notion. At the same time, matte black with a suppressor makes them an excellent choice for small game hunting.

While I was worried that I would have to tell Matt I couldn’t test his barrel to its full potential, he was busy planning to offer Charger-length barrels. So I feel like I got a (possibly undeserved) break there. His product line will eventually include rifle barrels in 16.1″  and 18.5″ lengths. For Chargers (or SBRs), there will also be 7″ and 9″ options. Colors include matte black, glossy black, a glossy black/red weave, blue, silver, purple, red, green, gold, and pink. In addition to this rainbow of colors, expect to see matte black Cerakote for those that don’t like the stainless.

I’d like to thank Matt for providing his barrel for this review. It’s been an attention-getter at the indoor range, and a joy to shoot outdoors. If you’re looking for a carbon fiber barrel for your 10/22, at a competitive price (currently $225-235 with free shipping), check out Summit-Precision.com.

Comments? Questions? Have any of our readers tried out a Summit-Precision barrel? Feel free to share below.