With the release of their “Thunder” Hammer and “Lightning” Sear, TandemKross has upped their trigger game. This matched hammer and sear is available for the Ruger Mark IV and 22/45 pistols. If you’re looking to improve the performance of your factory trigger without gunsmithing, it’s the way to go. Drops right in with no fuss, and no fitting required.

The kit I recently installed is the “Blast Pack”, which contains the hammer, sear, and “Blast Shield” Magazine Disconnect. It’s also available as the “Ultimate” Trigger Kit for Ruger MKIV 22/45. That kit includes their “Victory” Trigger for Ruger Mark IV 22/45 models as well. I mention that, because I already had the Victory trigger, so my trigger is now all TandemKross components. And it rocks! 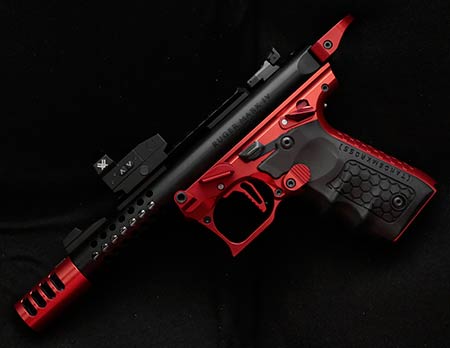 The $79.99 “Blast Pack” contains the “Thunder” Hammer and “Lightning” Sear, and a “Blast Shield” magazine disconnect. This is the kit you want if you’re planning on keeping the factory trigger, or already have the “Victory” trigger. If you haven’t already upgraded to the $49.99 “Victory” trigger, and are planning to, then get the $119.99 “Ultimate” trigger kit, and save $10 by bundling it all together. Note that prices were current at time of publication.

TandemKross Blast Pack for the Ruger Mark IV and 22/45

First, these two parts are designed to work only with each other. Neither should be paired with any other OEM or aftermarket hammer and sear. That’s not a branding mandate, it’s a safety consideration. More than likely because neither follows the exact angles and radius of the factory parts.

They’re made from S7 hardened tool steel for long life with minimal wear. And their proprietary radius and polish results in a very crisp trigger pull of between 2 and 2.5 pounds. Paired with the TandemKross Victory trigger, you can adjust out most pre-travel and over-travel.

This little aluminum piece replaced the factory magazine disconnect. I covered the install of it well over a year ago, here. I’ve got them in all three of my Mark IV pistols, where they have been trouble-free. They keep your internals a bit cleaner when shooting dirty ammo (a must for suppressor use). In addition, they can assist with magazine alignment. I’m pretty certain they improve the trigger feel a bit, and definitely make assembly easier. Perhaps most important, it removes the requirement to insert a magazine to check the trigger and safety function. 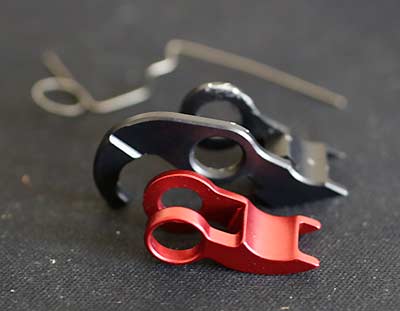 TandemKross Blast Shield in red, and the parts it replaces behind it

Over a year and a half ago, I wrote about installing a Victory trigger in my wife’s Mark IV. All three of my Mark IV pistols have them. So do my PC Carbines, and my PC Charger. And one or two of my 10/22s. I like flat triggers, and I cannot lie. One had some sharp edges, but I quickly realized that was not an issue with correct finger placement. Each one ships with a small hex wrench, so that the pre-travel and over-travel can be adjusted via two set screws. It takes a little work to fully dial it in, but then it’s pretty sweet. 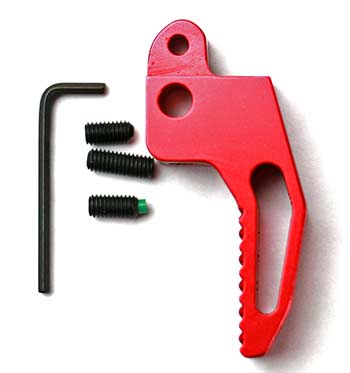 TandemKross always provides clear instructions for installation. Either text, video, or both. In my case, I have modified my pistols so many times that I don’t need to refer to the instructions. Because this was going in my Kraken project, it was even a little easier, thanks to the extra hole in the lower which makes assembling the hammer and sear that much less frustrating. Usually, I remember to time myself, but not with this job. So I’d estimate 20-30 minutes from takedown to testing the safety and trigger.

Basically, you should be comfortable with removing and swapping all the parts in the lower. It’s a great way to gain a better understanding of the functions of your firearm’s parts too. My advice is to check their website before ordering. Read the instructions, watch the videos, and you should immediately know if it’s a project you can do on your own. The Mark IV 22/45 is very simple, if you follow the correct order. If I can do it, you can do it.

On my digital trigger gauge, it broke within a 10th of an ounce of 2.5 pounds over eight to ten pulls. It actually got boring, it was so consistent. 2 pounds, 8.6 ounces was the average. Almost no pre-travel, zero over-travel, with no creep, no grit, and a nice clean break. While you might want to go a little lighter if you’re strictly a paper puncher, this seems ideal for Steel Challenge or just the discerning plinker.

Always my favorite part, I took my newly upgraded Ruger Mark IV 22/45 with the TandemKross Kraken lower to our outdoor shooting spot. I also brought another Mark IV, with the Victory trigger, but factory hammer and sear, for comparison. My plan was to compare the two, but also let my nephews shoot both, and offer feedback. Neither was aware of what was actually done to either pistol. And they’re not exactly experts, which is in some ways a benefit. I wanted to see if they could express a clear preference.

Needless to say, the “Thunder” Hammer and “Lightning” Sear won them over. The difference between the two triggers in pull weight was only a half pound. But the overall feel was so much better. In my hands, it felt smoother, and much more predictable. Light enough for precision work, and consistent enough for speed too. Whether shooting empty shotgun hulls, or making an old soup can dance, it’s a big improvement over the factory trigger, which isn’t all that bad to begin with.

TandemKross Blast Pack for the Ruger Mark IV and 22/45, plus their Victory trigger, making their Ultimate trigger kit

This is definitely a worthwhile upgrade for the Mark IV and 22/45 Rugers. About the only tough decision would be whether or not to get the Victory trigger with it. Seems like the gold trigger found on certain Lite models is really popular. So I can see where some folks who searched for ages, or paid a premium, might not want to swap their trigger. Either way, they’ll have a winner with this upgrade. Check it out at TandemKross.com.

And a special thanks to TandemKross for their continued support of this site. We love recreational shooting, and we love taking new shooters for their first experience. Safe, reliable, and accurate rimfire pistols are an excellent way to bring more enthusiasts into the sport. Being able to try out their latest products, and share them locally, as well as with our readers, is a privilege which we are grateful for.

Comments? Questions? Have any of our readers tried out any of the new TandemKross trigger components? Feel free to share below.