Dropping a Timney trigger into one of my 10/22 projects makes a lot of sense. I’ve used a variety of 10/22 triggers already, and I’ve tried one of Timney’s famed triggers for the AR. Good stuff. So I reached out to get one for testing and evaluation. 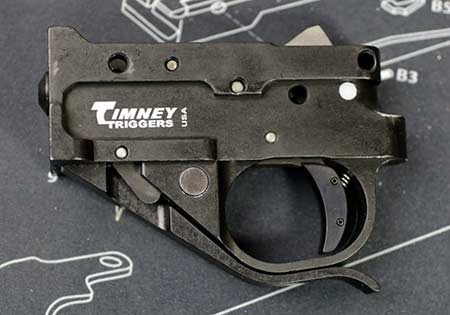 Unlike other 10/22 offerings, the Timney trigger is sold only as a complete, drop-in trigger assembly. You can’t buy the individual components and use your own housing. Upon closer inspection, it’s easy to see why. Timney didn’t just take the Ruger design and put their own parts in it. They re-engineered it completely. At first glance, it appears that the hammer spring is missing. In reality, it’s just been moved. The hammer itself looks different too. Lacking an engineering degree (two of our contributors are actual engineers), I decided it would be better to just shoot it, and not question things.

You can order the housing in either black or silver. The trigger shoe, which is not quite flat, but not overly curved, has several color options besides black. If color is your thing, choose from red, blue, gold, green, or silver. I wasn’t given a choice for my test unit, but I would have chosen the black/black combination anyway. Oh, there’s also an auto bolt release included. Why some companies insist on making this an option is beyond me. So I appreciate that Timney doesn’t charge extra, or expect you to buy another part. 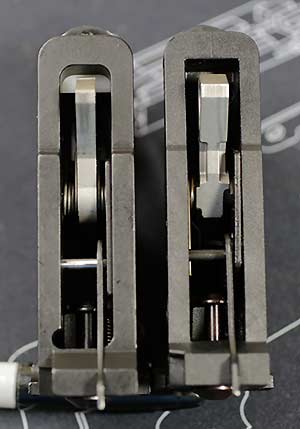 As far as the construction, it’s mostly what you would expect from an aftermarket trigger. The entire trigger group is enclosed in a machined housing. 6061 aluminum is used for the housing and extended magazine release, and all the steel parts are EDM wire cut. That extended magazine release wraps closely around the trigger housing. You can see how consistent the clearance is for the length of it. Tolerances are tight, fit and finish is impeccable.

As mentioned, this is a complete, drop-in unit. Installing it isn’t any more work than taking down your rifle for a cleaning. My install was into a brand new receiver, but it’s no different than reinstalling a factory trigger. Cock the hammer back, make sure the ejector is in its place, and slide the receiver over it. Timney includes some snug fitting stainless cross pins, and a matching bolt buffer. Although I prefer a non-steel buffer, I did use it for my initial testing. Once the entire rifle was assembled, I was ready for the range.

Timney sets the pull weight at 2-3/4 pounds, which is about where I prefer my triggers. Not too heavy, not too light. There’s no pre-travel, no side to side slop, and no overtravel. I understand that their changes were to improve on the factory trigger, but this is really night and day. It moves very little, with a crisp break. While I’m rarely without words to describe something, it’s difficult to describe. And “really nice” doesn’t cut it. But it’s really nice. That may be why it’s not easy to describe. It does exactly what’s expected so well. I can’t say the take-up, break, or overtravel might need a bit of tuning. It’s just spot-on.

Over a few hundred rounds, it gave me zero issues. Click. Boom. Eject. Oh, I also shot some of the smallest groups I’ve ever managed with a 10/22. But that may be related to the rifle it was in. Aftermarket receiver, match grade bolt, and a quality barrel. No skimping on any parts. It’s not entirely perfect though. That long magazine release took some getting used to. I bumped it and dropped the very first magazine. But that was a single isolated incident. Also, the release might be in the way if using certain grips. For a regular stock, or even a thumbhole, it should be fine. But in a Charger, or other stock using a pistol grip, it’s right on your middle finger’s knuckle.

There are some very good 10/22 triggers out there, with the very best usually $200 or more. This one carries an MSRP of $268.99, which isn’t inexpensive by any means. For that, you’re getting a US-made, completely redesigned trigger group, backed by a lifetime warranty. One that performs exceptionally well. Timney has been around since 1946, so none of this is any surprise to me. And I think it’s a good value when you’re upgrading the rest of your rifle to match it.  They’ve produced countless triggers for other popular platforms, and will continue to do so. Check them out at Timneytriggers.com.

Comments? Questions? Have any of our readers tried out this, or any other Timney triggers? Feel free to share below.