Who needs a ToughTested ROC Solar Wireless Charger? Anyone who works outside their home, spends time outdoors, or just wants to be prepared. That includes hikers, hunters, cyclists, backpackers, preppers, and even office workers. This isn’t just for charging phones so you can post selfies. It’s ideal for charging GPS and satellite messaging devices as well. Let me start by breaking down the feature list. 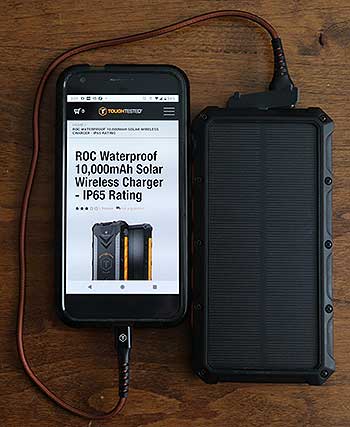 At 6.8 x 4.8 x 1.3 inches, it’s clearly bigger than a phone. But it’s not so big that you can’t find a pocket or place to stash it. If you’re hiking, you’ll want to attach it outside a pack, where the recessed solar panel can collect some light. (There’s a thin lashing point visible in the photo below) If you’re setting up camp, you can leave it in a position to catch sun all day. Then recharge your devices in the evening. Weight is just .80 pounds (12.8 ounces), which is respectable for the protective casing and battery capacity. 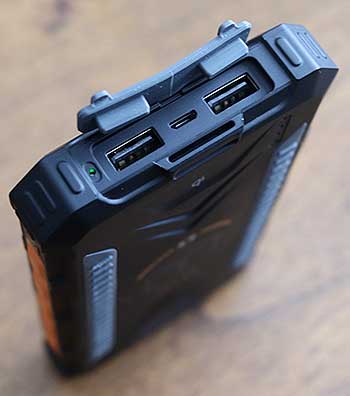 Power in and out

Initially, the ROC Waterproof 10,000mAh Solar Wireless Charger should be charged from an AC outlet. I just let it charge overnight the first time. From there, it took 2-5 hours, depending on how much I used it during the day. Although the solar panel is pretty efficient, it’s going to take a fair bit of sun to fully charge the battery. So that’s best for topping it up during the day. I used the included USB-C cable to charge my phone at normal speed. We also tried the Qi wireless charging with an iPhone. While that requires no cable, it’s not the best for “on the go” charging. But it’s a nice option to have, so it’s appreciated. 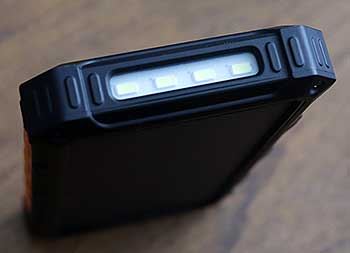 First, I need a new phone. My Pixel XL has been great, but the battery is about done. Which made this review ideal, as I’ve been charging or topping my phone off several times per day. I just plugged the USB cable into the ROC Waterproof 10,000mAh Solar Wireless Charger, and the other end into my phone. Then I hit the button on the side, and it charged as fast as if I used a wall charger. It provided four partial or complete charges before needing to be charged itself. If I was camping, my phone would only get very light use, compared to a typical workday. And the amount required to recharge it each day would be much less. By using the solar panel to replenish the charger, it would easily supply my needs for days at a time. 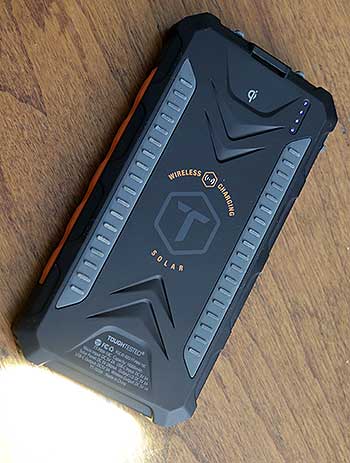 At one end of the ROC Waterproof 10,000mAh Solar Wireless Charger are four white LEDs. These are the flashlight, which is activated by double-tapping the power button. Additional taps allow you to scroll through different modes. It will flash slowly, or a combination slow/fast flash. That second one is three short, three long, and three short flashes again. For those that know Morse Code, that’s S.O.S. There are also four very small blue LEDs which indicate charging and state of charge. Finally, another small green LED lets you know that the solar panel is sending juice to the battery. Simple to use, with minimal moving parts.

Over the years, I have tried many solar options. Some had large panels, and weren’t efficient. Others had smaller panels, but the interface wasn’t easy to use. If it’s not intuitive, that’s a problem. No one should have to bring the manual with them. Finally, battery capacity per dollar was a concern. And that’s where the ROC shines. It’s physically less than half the size of one of my previous chargers. And is only 80% of the weight. Yet it provides an extra 10% capacity. At one-fourth of the price. I could outfit my whole family with them at that price.

Although we didn’t outright abuse it, the ROC Waterproof 10,000mAh Solar Wireless Charger saw some hard use. It was dropped plenty of times, and knocked around in a backpack for weeks. One look at the case though, and you can see it would take something serious to damage it. The ridges and curves aren’t just for looks – they provide strength and rigidity. All the ports and the switch are sealed or covered. Which is why ToughTested can offer a five year warranty. With an MSRP of $59.99, that works out to $1 per month. Isn’t it worth that, to always have your device charged? Find it and even larger capacity chargers at ToughTested.com.

*More on the IP65 rating and testing. The 6 indicates that it’s “dust tight” – no ingress of dust; complete protection against contact. Test duration of up to 8 hours based on airflow. The 5 denotes that it passed a water testing involving water jets. “Water projected by a nozzle (6.3 mm) against enclosure from any direction shall have no harmful effects.”

We’d like to thank ToughTested for providing their ROC Waterproof 10,000mAh Solar Wireless Charger for this review. We were not financially compensated for this post, and received a sample for review purposes only. The opinions expressed on this site are completely based on the author’s experience.