If you have a Ruger Mark pistol*, and shoot it often, you need the Ultimate Cliploader. Normally, when I see “Ultimate” in a product name, I roll my eyes. But in this case, it’s a very accurate description. Because you can load your magazines in just seconds, with no wear and tear on your thumb. And with a retail price of $23.50, it’s so inexpensive, there’s no reason not to have one. After using mine for several months, I wouldn’t want to own my MK IV 22/45 pistols without one.

Find it for less on Amazon!

Designed in 2002, this molded plastic magazine loader is pure genius. It’s durable, easy to use, and astoundingly simple in construction. The sliding cover is the only external moving part. It’s available in four colors. If you can pour, shake, and push, you can use it. And it’s made in America. What’s not to like? Their video was posted to Youtube in 2010. Like the loader itself, it’s pretty simple, and to the point. Check it out (watch the whole thing for the closeup) to see how easy it is to use the Ultimate Cliploader.

As you can see in the video above, there’s really nothing to it. Pour up to 50 rounds in. Shake it a bit, and the rounds will drop into the groove, held in place by their rim. Holding the loader upright, insert your magazine. Most of the time, ten rounds will drop right into the magazine. “And you’re done”. Sometimes they won’t drop in so neatly, and you have to “pump” the mag in and out a tiny bit. This is still much faster than using the follower button and manually loading. There’s an adjustment screw, but I haven’t had to use it. It just works every time. 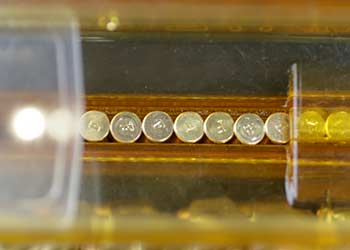 Ultimate Cliploader top view. Note how it catches the rim of each round.

The photo above shows the view looking into the Ultimate Cliploader from the top, with the door slid open. As rounds are poured in, the angled “floor” causes them to move towards the groove in the middle. Each round drops into the groove, bullet end first. And the rim catches them, holding them in place.

Ultimate Cliploader side view. Rounds lined up ready to load into a magazine.

Here you can see them from the side, all lined up. The key is to make sure there are at least ten rounds staged in this position. At this point, all that’s required is to tilt the Ultimate Cliploader up, and push in a magazine. 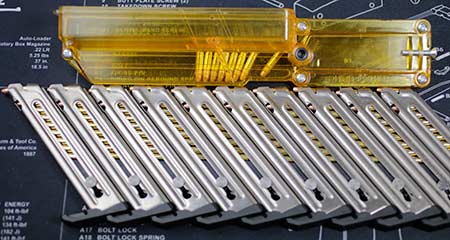 Ten magazines loaded in 2:02. That includes hitting the stopwatch, and dumping in the first handful of ammo. Topping it off was the only thing that slowed me down. If I had added 50 rounds and just needed to load 5 magazines, it would probably take less than 30 seconds. Either way, it’s really fast and easy.

I might be considered a “volume shooter”. I usually take about ten magazines to the range, and reload them several times. When I am with friends, we go through at least one bulk 550 round carton of ammo. And no one I know wants to manually reload hundreds of rimfire rounds into Ruger magazines. This just makes it so easy though. I’ve run well over 1,000 rounds through it without any issues. It’s gotten banged around a bit in my range bag, but still works like new. Whatever plastic they’ve used, it doesn’t seem brittle. And with soft brass cases, I don’t see this ever wearing out. If it did, I’d buy another without hesitation.

Someone might catch on that I call a lot of different pieces of gear “My favorite”. But if I had a top ten for my Ruger Mark pistols, this would be in it. It lets you spend more time shooting, and less time reloading. For only $23.50, which is a total bargain. I don’t know about you, but my thumb and my time are worth more than that. I can’t find a bad thing to say about it – it really is the Ultimate Cliploader. If you have any questions or comments about it, feel free to share them below.

*The Ultimate Cliploader featured in this article was provided by McFadden Machine for testing and review.