As I sat down to write about the UTG Reflex Micro Dot, I had to reflect on the past 8 months. If you had asked me in January about reviewing one, I would have given you a puzzled look. While UTG have improved their products by leaps and bounds, I’m partial to another brand. So it would not have crossed my mind. Fast forward to today, and it’s a very different world we live in. Firearms, parts, accessories, and ammunition are not as cheap and plentiful as they once were. And for many people, budgets have gotten tighter. My preferred red dot carries a $349.99 MSRP. If I can find one. So it was time to take a look at the UTG Reflex Micro Dot offerings. Specifically this reflex sight, which can be had for less than its $89.97 MSRP. 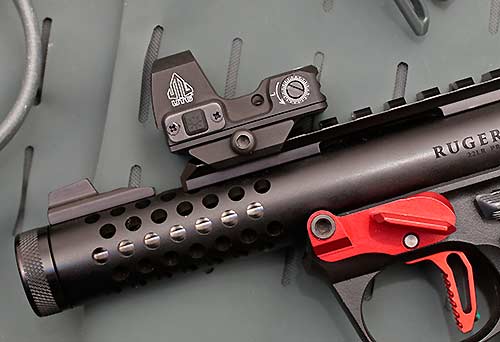 Check the price on Amazon!

“UTG® Reflex Micro Dot, Green 4 MOA Single Dot, Adaptive Base” is its full name, from their website. Let’s break down that description a bit. By reflex, we know that an LED projects the dot onto a lens, which is reflected back to the user. Next, it’s obviously got a small footprint. Then there’s the Adaptive Base. Basically, you can direct mount it to a pistol with the Docter footprint. But I suspect many users will take advantage of the included low profile Picatinny base instead.

Which brings us to the dot itself. It’s green, and 4 MOA in size. Similar sights have a choice of 3 or 6 MOA. I think 4 MOA is actually the sweet spot for many applications. It covers one inch at 25 yards. Any smaller, and it might be hard to pick up quickly. Bigger, and it’s okay for shooting large targets, but may cover too much on smaller targets or at greater distances. Oh, and green is easy for the human eye to see in daylight. For the reasonable price, there’s a lot to like here.

Moving on to construction, things get interesting. UTG says it’s built on their True Strength™ Platform. This should make it shock, fog, and rainproof. Since I purchased this out of pocket, I didn’t exactly test those claims too much. But I don’t baby my gear – it gets used, and used a lot. With a housing machined from 6061-T6 aluminum, I expect it to hold up well, unless it’s subjected to abuse. Finish is described as “Matte Black Anodize”, and I like it better than some of the somewhat shinier finishes I’ve seen. Though it’s probably not a hard coat at this price, so we’ll see how it stands the test of time.

The overall dimensions and shape for the UTG Reflex Micro Dot aren’t too different from its more expensive competition. 48.3mm long, 35.3mm total height, of which about 25.7mm is above the clamp area. So it’s got a pretty low profile, while still having a decent lens to view. Weight is 1.87oz, and it runs on a single CR2032 3V battery. Unfortunately, you have to remove it to replace the battery, possibly losing your zero. But wrenches for removing it from a slide cut or Picatinny rail are included, along with a spare battery.

Function is where it really shines. One button controls everything. Press to turn it on. Tap to cycle through the six power settings. Hold to turn it off. Best of all, it reverts to your last setting when you turn it back on. No need to tap through all the settings to get back to your favorite. This really simplifies operation.

The only other controls are the recessed screws for adjusting the zero, at 1 MOA per click. On top, is the word Up, with an arrow pointing to the right. On the left side is a prominent L, with an arrow also pointing clockwise. Kind of hard to screw that one up, since they made it so easy to follow. Thoughtfully, a stubby screwdriver is included that fits perfectly. 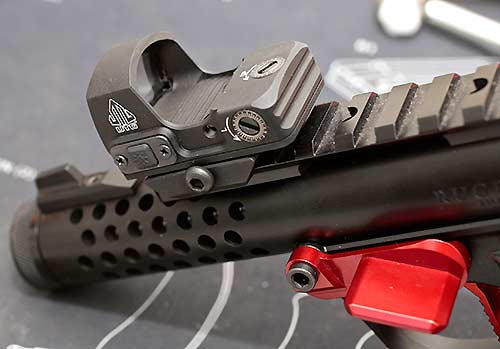 For testing, I mounted it on a Ruger 10/22 Charger, as well as a MKIV 22/45 pistol. Neither of these have a reciprocating slide, which I think is notable. At this price, I am wary of mounting it to something like a 9mm handgun, where the slide would batter it with each pull of the trigger. But I feel that way about any similar sight. Also, I think that it’s more likely to find a home on a .22 than other firearms. I could certainly be wrong though.

After a quick zero with a laser, it was ready to go. Indoors at the range, it made punching paper out to 25 yards quick and easy. I didn’t have any trouble picking up the dot on the lower settings, and it didn’t flare out on the higher settings. My actual groups were neither better nor worse, but I noted that I had less eye strain than I usually do at the end of a session.

Outdoors, we threw down a steel reactive target. No lining up sights here – when the dot was on the steel, pull the trigger and make it ring. I handed it to my nephew, who had probably never fired a handgun outside of video games, and he was able to hit it more often than not. I had initially worried about it being visible outdoors, but it was fine in bright sunlight. Another win.

I’m all for learning the essentials. Everyone should understand how iron sights work. But this really does make shooting fun for beginners and enthusiasts. Over a few outings and several hundred rounds, the UTG Reflex Micro Dot held zero. For the price, I think it’s hard to beat. So I bought a second one for one of my other 22/45 pistols. Complaints? Of course, I have a few nits to pick. A huge cleaning cloth was included, but no cover. Also, there are exposed screws for the power switch that aren’t fully flush. Does that matter? Not really, but recessed screws would give it a more finished look.

Leapers, Inc. offers a lifetime warranty which covers materials and workmanship for “the product’s life span”. That doesn’t mean they cover mishaps, and it doesn’t mean forever. But from the other reviews I have read online, Leapers/UTG has been pretty good when it comes to warranty service. Although I don’t expect to see them on LEO or military issued arms any time soon, they are certainly suitable for recreational use. If you haven’t seen checked out their product line in a while, now might be a good time. Leapers.com.

Comments? Questions? Have any of our readers tried out the UTG Reflex Micro Dot? Feel free to share below.