Stocking stuffer alert: the Viva multi-tool from CRKT makes a great gift for just about anyone on your list. It’s priced under $10, and does a few simple tasks really well. This is the sort of product that I find myself using much more often than I thought I would.

Designed by Liong Mah, known for his practical creations, the Viva is simple yet handy. At 3.99 inches long, it’s sized to hang off your belt loop or live in your pocket. Although it doesn’t weigh much, there is some substance to it. That’s because it’s thick enough to actually be useful. This tool isn’t to bend very easily. Which is why CRKT calls it a prybar, flat screwdriver, bottle opener, and multi-wrench. While I rarely have a need for the wrench part, I did find an unexpected use for it. 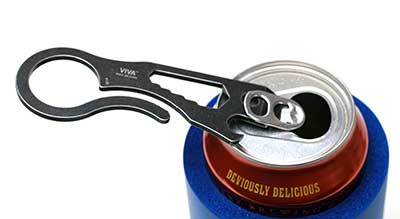 First, there’s the bottle opener. Always handy, even for twist-offs. Oh wait, you prefer canned beverages? No worries. Because the screwdriver/pry bar will pop those right open too. Without being too sexist, I think this might appeal to women as much as men. My wife has had multiple hand surgeries, and she likes to have her nails done. So this is her all-in-one beverage tool. If you look at the shape, it’s easy to see that the Viva was made for hanging off a belt loop, or on a hook. Always ready to go. 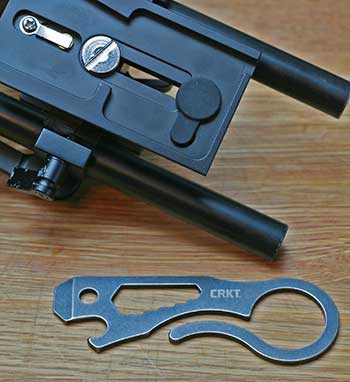 As far as the pry bar goes, I wish I had found the Viva sooner. When not working my day job or running this site, I spend a lot of time chasing down wildlife with my cameras. Both my photo and video gear require a large screwdriver for the tripod plates. Some day I will swap each screw out for ones that take hex keys. But for now, many require a large, flat blade. Plus there are levers that I can’t seem to get tight enough. And the Viva excels at both. That wrench slot is the perfect size to slip over the levers, and get them snug and secure. 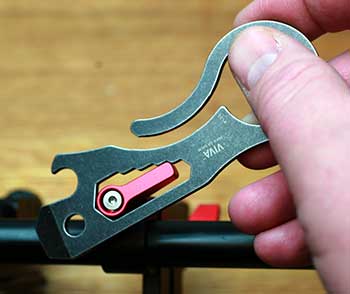 So is the Viva for around the house, a camp tool, or one frustrated photographer’s best friend? Well, I’d say it’s all three. For the few tasks it’s designed for, it works really well. And it’s far more durable than you might expect. If you shop around, you’ll find it for sale at less than the $9.99 MSRP. That makes it a total bargain, at least to me. crkt.com

I’d like to thank CRKT for providing their Viva for this review. It’s been far more useful than I had expected. And I generally have high expectations.