White River Knife & Tool, Coopersville, MI, December 2017 –  New for 2018 comes White River’s special survival sheath. Earlier Firecraft survival knives were sold with leather sheaths–this new heavy-duty Kydex sheath changes that!
John Cammenga, president of White river says–“We wanted a sheath that complements the utility style of our Firecraft series survival knives. After several months of work we feel we have arrived at a unique and tough sheath that will meet the needs of most anyone utilizing this knife.” 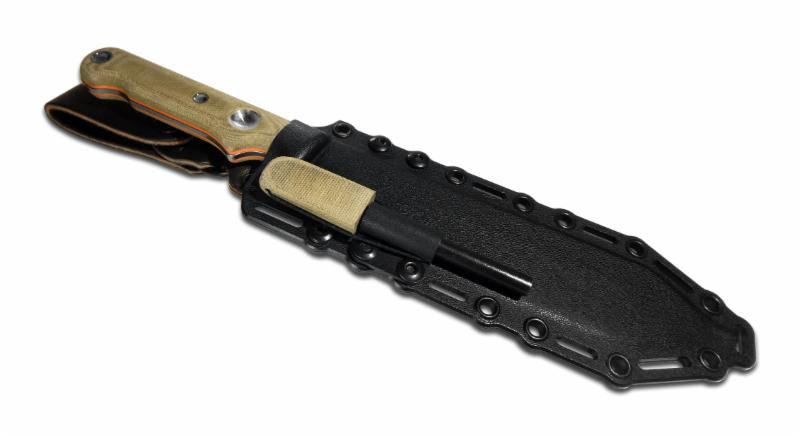 But Why?
Due to popular demand for White River’s incredibly popular Firecraft series survival knives the company in order to meet the 2017 market deadline sold the knives at a near loss with premium leather sheaths. Now that the Kydex sheath system is finally perfected, it replaces the leather sheath as standard.
The new Kydex sheath is loaded with additional features to both protect the knife and to provide great convenience whether belt worn, tied to a uniform, on Mollie gear or attached to backpacks.
This ambidextrous sheath is designed so that if worn on the waist the sheath may be quickly removed from the belt attachment and used to hold the knife more securely while utilizing the built in fire bow drill indent for fire making. The sheath’s many slots and rivet holes allow for an endless variety of attachment options to most anything. The sheath has a ferro rod holder, ferro rod and has a water drain slot at the tip.
Those who currently have the leather sheaths who wish to purchase an (extra) Kydex sheath can order the new Kydex sheath (includes the ferro rod) for $40, $45 and $50 for the 4″, 5″ and 7″ knives respectively
Those who want a leather sheath instead of Kydex may at time of order do so for an up-charge of $30, $35, and $40 respectively for the 4, 5, and 7-inch blades.
White River products, materials and manufacturing are all American.
White River Knife & Tool®
130 Mason Drive
Coopersville, MI
49404
616-997-0026
www.whiteriverknives.com